US stocks surged on Tuesday on encouraging macroeconomic data. The ISM Manufacturing PMI surged to 56.0 – its highest level seen since November 2018. The reading also beat the market forecast of 54.5, suggesting a faster-than-expected pace of recovery in North America’s manufacturing sector. Another gauge – Markit Manufacturing PMI – came in slightly below market expectation at 53.1. Despite this, both readings mark the fourth consecutive month of recovery and have moved firmly into expansionary territory since June 2020.

Asia-Pacific stocks may follow the strong US lead and move higher on Wednesday, as suggested by futures markets. This is despite the volatility of US shares – the closely-watched VIX index – continuing to nudge higher to 30.96. This unusual phenomenon, however, may suggest that the tech-led stock market rally is vulnerable to a technical pullback. 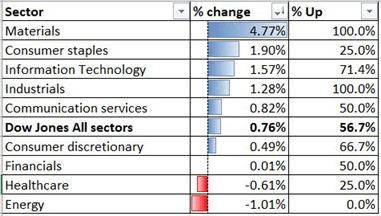 Technically,the Dow is riding a bullish trend but may face some technical pullback as the RSI indicator has flipped back from the overbought zone above 70.0. Immediate support and resistance levels can be found at 27,900 and 29,600 respectively.

Australia’s ASX 200 stock benchmark plunged 1.7% on Tuesday after Facebook threatened to block news on Australian sites if proposed royalty regulations became law. Today’s release of the 2Q GDP figure will be carefully watched by ASX and Australian Dollar traders. The forecast is a -5.3% YoY plunge in economic growth – a record-setting decline. An outcome that beats expectation may help to boost confidence and alleviate selling pressure. 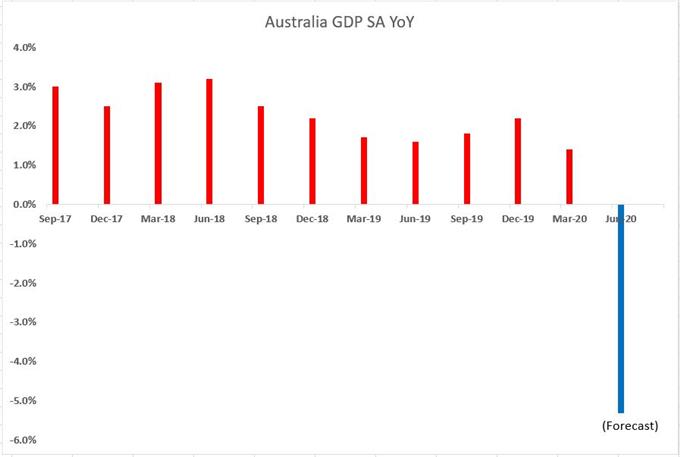 Technically, the ASX 200 has likely broken below a “Descending Triangle” that formed some months ago. Near-term momentum has turned bearish as suggested by the 20- and 50-Day Simple Moving Average (SMA) lines.

AUD/USD is facing a key resistance level at 0.739 – the 200% Fibonacci extension. Failing to break through this level will probably lead to a technical pullback towards immediate support at 0.723.

Canadian Dollar Talking Points USD/CAD trades to a fresh monthly high (1.3321) as the US Dollar appreciates against all of its major counterparts, but fresh remarks from Federal Reserve officials may produce headwinds for the […]