You pay a very high price for a cheery consensus. It won’t be the economy that will do in investors; it will be the investors themselves. Uncertainty is actually the friend of the buyer of long-term values.”

Everyone has the brainpower to make money in stocks. Not everyone has the stomach. If you are susceptible to selling everything in a panic, you ought to avoid stocks and mutual funds altogether.”

When an investor focuses on short-term investments, he or she is observing the variability of the portfolio, not the returns – in short, being fooled by randomness.”

While it is true what Benjamin Franklin said about there being nothing in this world that is certain except for death and taxes, there is another certainty of facing more volatility as we head into the 2020 presidential election. Our strategy will be to remain focused on our long-term convictions which we outlined in last month’s newsletter (See: Returning to Ground Zero), and use any future volatility to our clients’ advantage.

U.S. GDP, a measure of our economic activity, peaked at an annualized rate of $21.75 trillion at the end of 2019. By the end of the second quarter of this year it had dropped over $2.2 trillion to $19.52 trillion. To help put that number into context, the hit to the economy during the Great Financial Crisis (GFC) of 2007-2009 was $483 billion, which means the present hit to our economy is more than 4.5X greater than what we saw in the worst crisis and recession since the Great Depression. Clearly, the COVID-induced economic collapse of 2020 has been of epic proportions.

Such an epic hit to our economy has been met with an even larger amount of stimulus, and the word “epic” does not do it justice. How do you respond to a $2.2 trillion hit to the economy? With more than $5 trillion in stimulus! Up to now we have seen $0.4 trillion in administrative actions, $2.3 trillion in legislative actions, and $2.4 trillion in monetary stimulus… and we still have trillions and trillions authorized above that with more fiscal stimulus in the works.

This is the number one focal point in our minds to remain fixed on should we see any dip in the markets in the coming weeks related to either growing COVID-19 outbreaks or election uncertainty. We are now seeing the 7-day average in new active cases in European countries reach a new high as we head into the 2020-2021 flu season and the U.S. is not far behind.

The problem we have entering the current flu season is that we had few if any active COVID-19 cases entering the last one. Today, we have over 11.5 million active global cases with over 4.7 million in the U.S. alone. 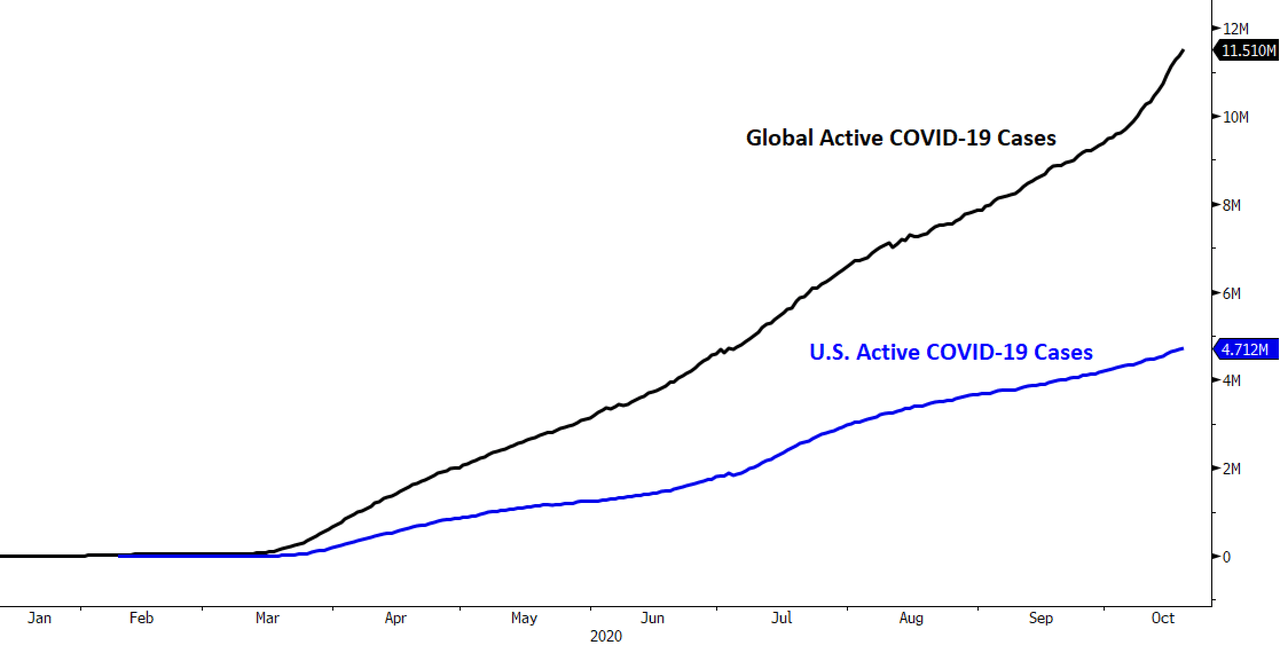 While cases have surged to new highs globally, the total number of deaths seen in European countries and in the U.S. have plummeted to decade lows. Sweden, which never implemented a full-scale lockdown, is seeing their death rate reach generational lows. 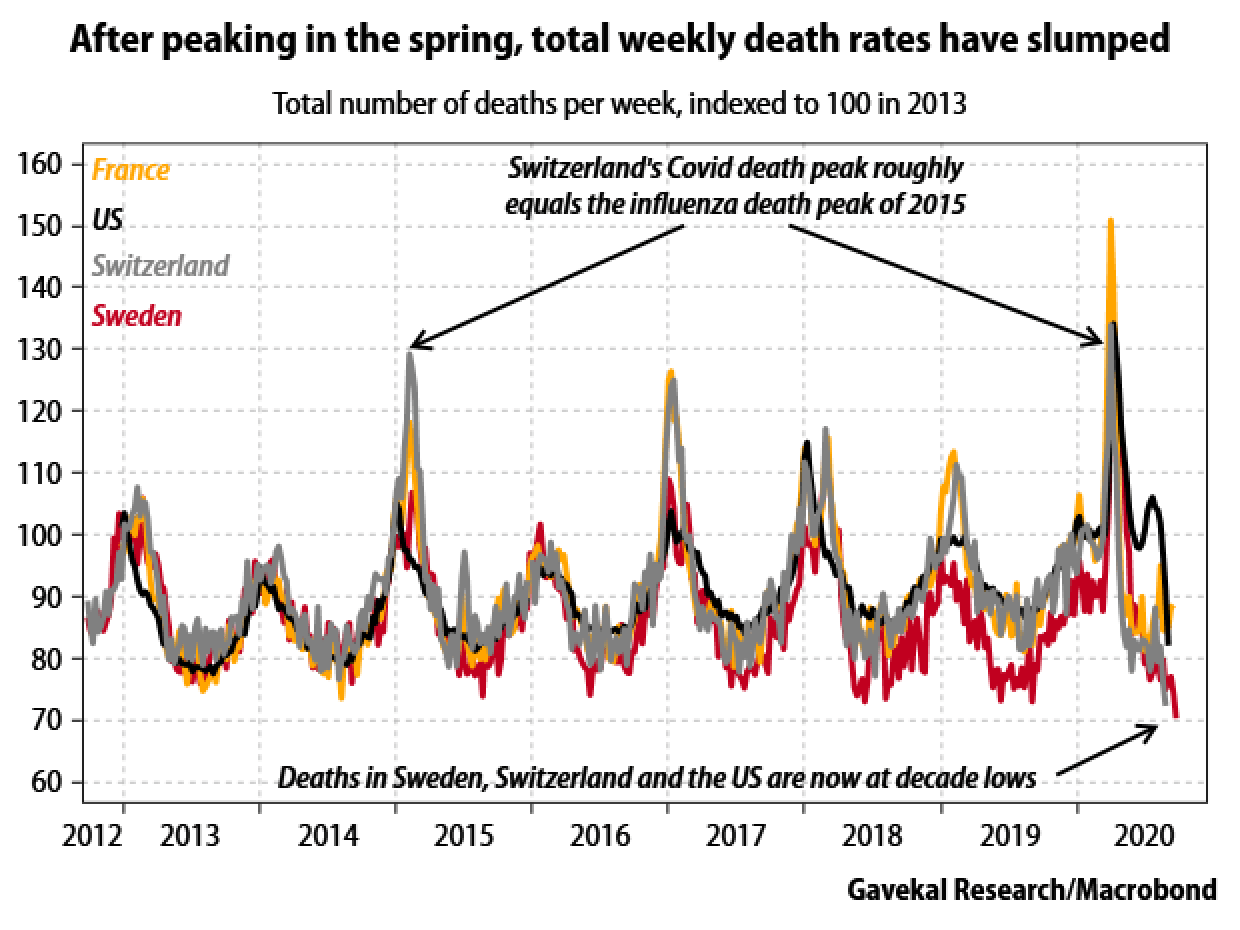 It appears that we are learning to live with and treat COVID-19 better than we did in the early onset of the pandemic; however, there is still a significant chance we see large-scale lockdowns across the globe that could cause the economic recovery to suffer a setback. The odds of future lockdowns are high as Louis Gave of Gavekal research pointed out in a recent interview (See: Louis Gave on Covid, Universal Basic Income, and an Asian Consumption Boom) we did with him regarding his recent piece, “The Guiding Principle Of Our Time.” Here’s an excerpt:

Now that every policy choice is reviewed and debated in real time by millions of people around the world, CYA [Cover Your Ass] has become all-important. Politicians have to put policies in place to hedge against the wildest tail risks imaginable. At the same time, the first instinct of policymakers…is to avoid doing anything that diverges too far from the pack. Any policymaker anywhere looking at the opprobrium heaped on Sweden will surely agree with John Kenneth Galbraith’s observation that “it is far, far safer to be wrong with the majority than to be right alone.”

If we begin to see COVID-related deaths pick up, we are undoubtedly going to see lockdowns begin to be implemented in the coming months, which could lead to a pullback in financial markets. If this occurs, our strategy will be to put cash to work and shift out of fixed income to an above neutral risk position in client accounts as we continue to focus on 2021 for a vaccine and resumption of global economic growth.

Following the historical script, the S&P 500 began to sell off in September heading into the final stretch of the presidential election as investors focused on the uncertainty of the election outcome. However, after the first presidential debate, the betting markets showed a significant pickup in the odds of Joe Biden winning the election and the S&P 500 began to rally as shown below. 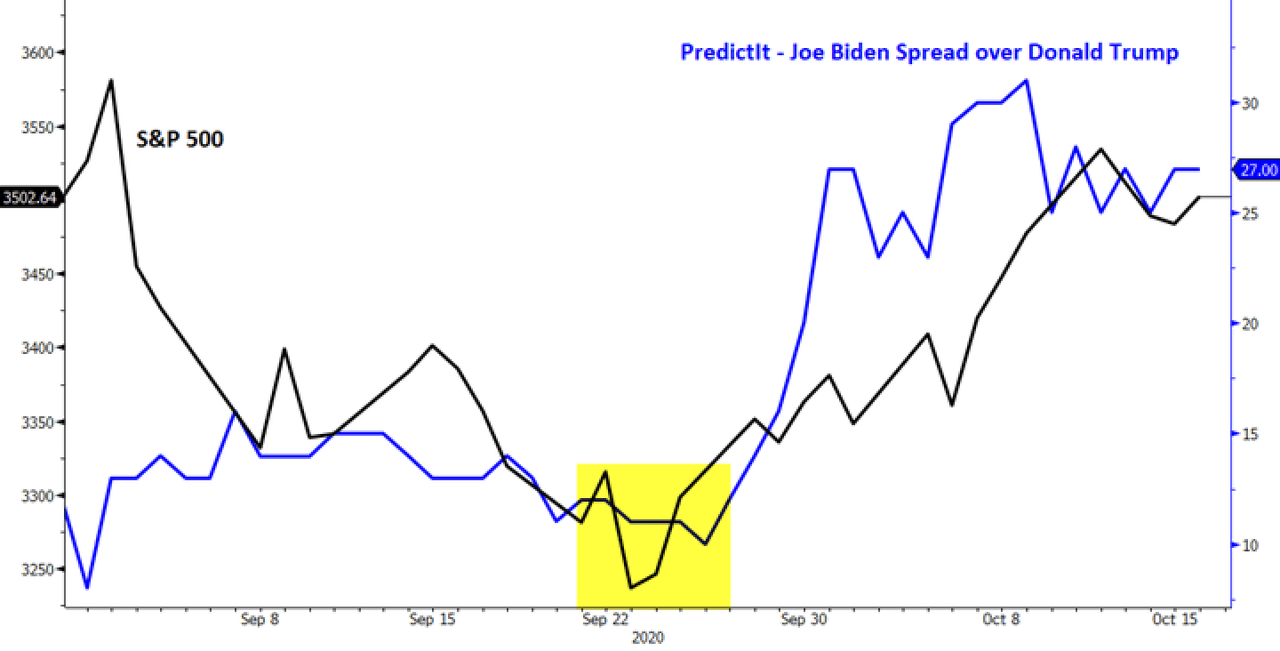 Source: Bloomberg, Financial Sense Wealth Management. Past performance is no guarantee of future results. Indices are unmanaged and cannot be invested into directly.

One of investors’ biggest fears is that if the election outcome is close, we could have a disputed election that drags into the end of the year. The odds of this occurring diminish should Biden win by a growing majority of votes and the S&P 500 has rallied in sync with Biden’s spread over Trump in the betting markets. Further, the election outcome is also impacting the bond markets where the 10-year US Treasury yield has been moving in lockstep with Biden’s odds of winning the election. This is likely because Biden has said his budget proposal would be the biggest since FDR’s New Deal. 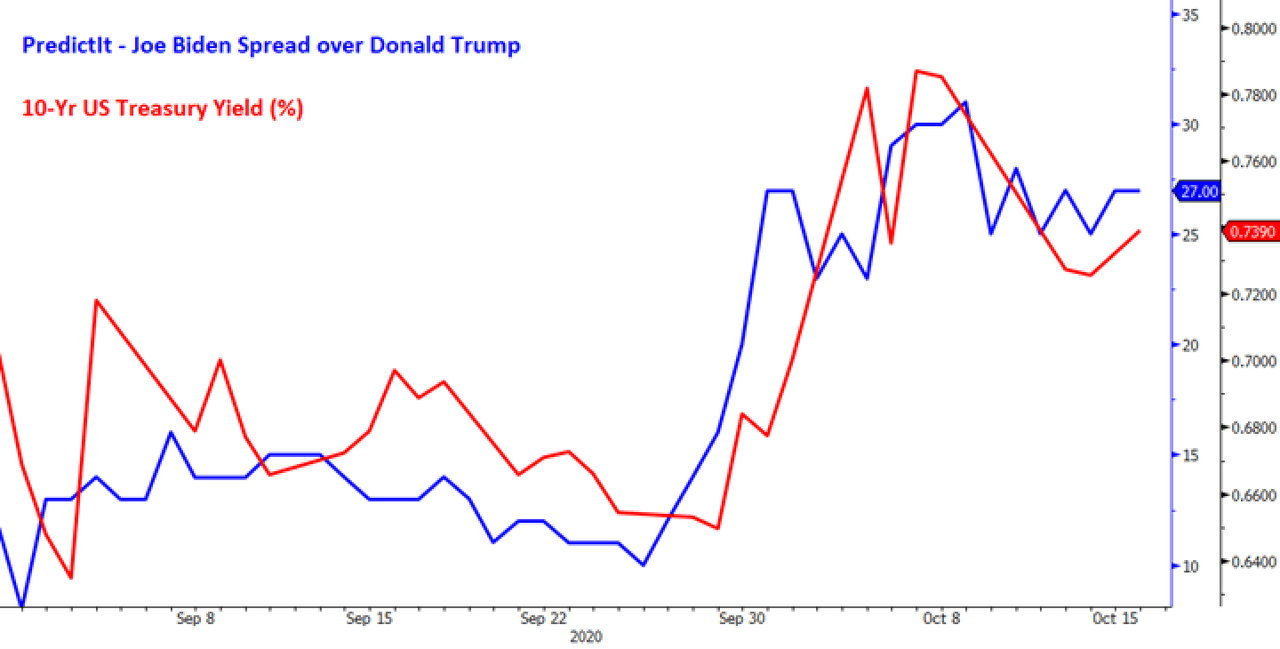 If we see a Biden presidency coupled with a full Democratic sweep of the House and Senate, we could see greater deficit spending than under President Trump, which would likely cause a spike in long-term interest rates. Therefore, we are monitoring the election outcome closely as it will certainly weigh on the bond market and impact our fixed income strategy.

Regardless of any short-term setbacks caused by the election or resurgence of COVID-19 infections, there are plenty of supports in place that are likely to cause stocks to be higher looking out a year from now. We have a very aggressive Federal Reserve that has pledged to keep interest rates at 0% for years to come and to do whatever is necessary to support our economy. Further, no matter who wins the White House, both presidential candidates have pledged to do more fiscal stimulus until the economy gets back on its feet. Additionally, it is highly likely that we will have a vaccine developed next year as there are more than 150 coronavirus vaccines in development worldwide, with several vaccines already in or near phase 3 trials that could be cleared for emergency use in the coming weeks and months.

Lastly, we are likely to see a surge in consumer buying as stimulus checks have led to a record increase in bank deposits across the country and with much of our service-based economy’s activity curtailed, the personal savings rate in our country reached extreme levels earlier this year and still remains near half-century highs. The accumulated savings households are building will likely be reduced as our economy opens again in 2021. It appears the market is discounting this as the S&P 500 Retail Select Industry Index, which had been trading sideways since 2015, recently broke out to hit an all-time high, which can’t be attributed to Amazon since it is an equal-weight index. 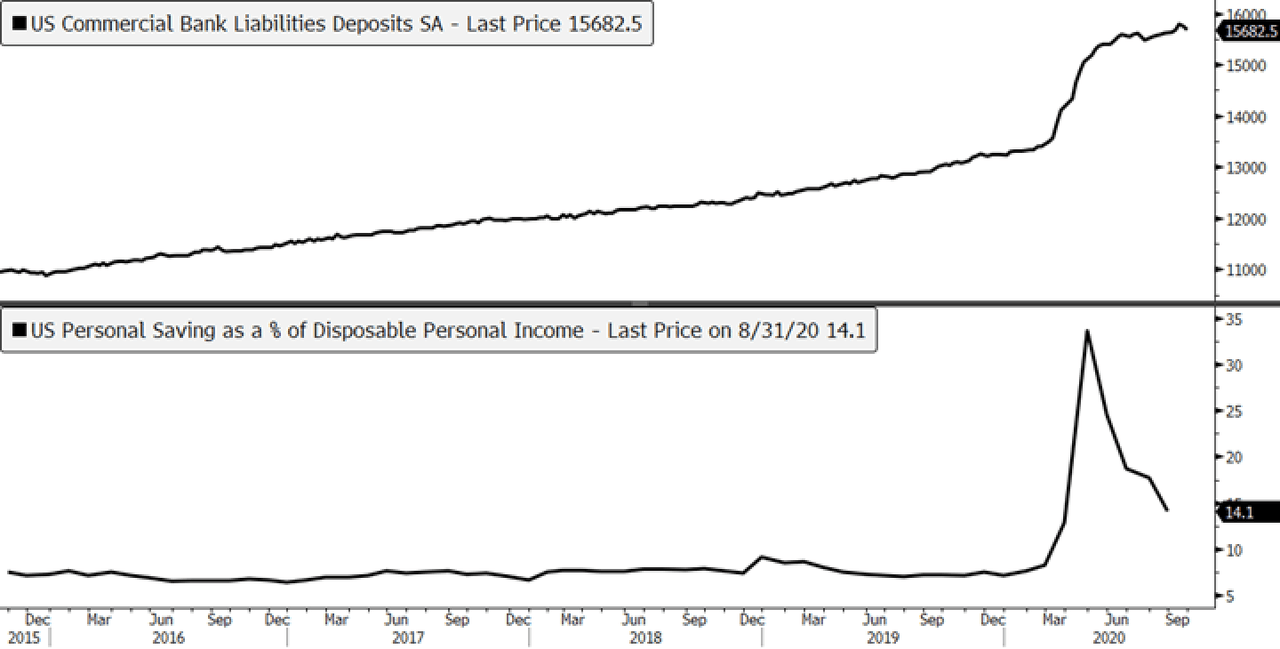 Client accounts are currently near a neutral allocation to risk assets though there is plenty of room for us to take advantage of any market dips as we reduce our allocation to bonds and cash and move above a neutral-risk position. As always, we will continue to monitor the markets and practice risk management as we enter what is likely to be a volatile period ahead, though our eyes are fixed through the tunnel to the light we see at the other side heading into 2021. If you have any questions regarding our portfolio strategy, please do not hesitate to reach out to your wealth manager.