History Doesn’t Repeat Itself, but It Often Rhymes.

Growth hype and its implications on price

Disney (DIS) is flying high on the back of retail hype, excitement around its DTC subscribers growth, massive addition of IP through the 21st Century deal and last but not least, the company’s unique business model that monetizes IP through theatres, theme parks and merchandizing.

With a forward P/E ratio of x46.7, both P/S and P/B ratio still gravitating near values last seen during the dot-com bubble and a free cash flow yield on last twelve months basis of only 1.7%, Disney is by no means a cheap stock.

Comparing DIS valuation multiples to those of Netflix (NASDAQ:NFLX), for example, does not make sense as the two companies’ capital intensity, growth profiles and returns on capital are very different. On top of that, justifying DIS valuation by looking at the most speculatively valued parts of the market is also not the right way of looking at this.

Some key arguments for this very high valuation are:

I will mostly disregard the first point as when or whether at all Disney’s theme parks, resorts and theatrical revenue recover to pre Covid-19 levels is still highly speculative. Nevertheless, pandemic closures and the current recession effect on disposable income do make matters worse for Disney, but they hardly represent a long-term bear thesis on their own.

As a matter of fact, I wrote my first bear thesis about Disney just before the pandemic hit in December of last year.

The Problem with DTC business expectations

Disney’s subscribers and revenue growth of its DTC division have been indeed spectacular as the company has passed 100m over the most recent quarter.

To begin with, even though it is impressive on a standalone basis, it is not so much on an overall company level. If we exclude sales from the Parks, Experiences & Products, which were decimated during the pandemic and would likely recover very slowly due to the drop in disposable income following the recession, then total revenue increased by $5.8bn over the last 12 months when compared to fiscal year 2019.

However, we should adjust this number to take into account the acquisition of 21st Century Fox and the full consolidation of Hulu as a result of the 30% stake acquisition. According to Disney’s FY 2019 annual report, the figures included in Disney’s top line since the acquisition are as follows.

Thus, assuming no seasonal effects on sales of 21st Century Fox and Hulu, we can estimate Disney’s legacy operations revenue excluding both the Parks, Experiences and Products segment and the effect of recent acquisitions. 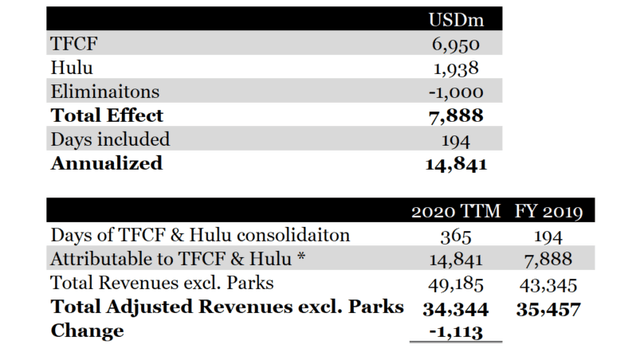 * approximation for annual revenue attributable to TFCF and Hulu

Even though the pandemic has also negatively affected Disney’s Studio segment, it helped the company achieve the impressive subscriber numbers for its DTC segment and thus offset the decline from theatrical segment. Therefore, it still remains unclear whether Disney’s transition towards a more DTC-oriented model would have a significant impact on the overall top-line growth, which brings me to the more important part of this transition – return on capital and profitability.

Extrapolating historical returns at a time of disruption when many new peers enter the field and legacy players are forced to adapt, almost always leads to disappointing results.

Going back all the way to 1996 and adjusting Disney’s Return on Equity for restructuring charges and one-off gains/losses looks as follows.

Based on the graph above, the following observations could be made:

If we map the above shown Adj. ROE versus Disney’s P/B ratio we could see that over the years there has been a relatively strong relationship between the two. With the exception of a few periods when either extreme fear or excitement brought valuations to unsustainable levels.

Having said that, Disney’s current valuation relative to its ROE is in the vicinity of the 1999-2000 period of extreme excitement and euphoria.

As one of the most important drivers of ROE, operating profitability is also strongly related to valuation levels. Once again by mapping this business fundamental to a key valuation multiple, we observe a similar trend – Disney’s current gap between the two is as wide as it was back in 2000, just prior to Disney’s share price collapse.

The reason for that is of course the significant decline in profitability of the troubled Parks, Experiences and Products segment, coupled with the massively unprofitable DTC & International unit.

As I said earlier, it still remains unclear when and if theme parks and resorts will return to their pre-pandemic profitability levels, but even if they do this will not be enough to close the gap between Disney’s fundamentals and valuation.

What would also be needed is the company’s DTC segment to become massively profitable and match the current profitability of Disney’s Media Networks and Studio segments. This, however, is highly unlikely as deep pocket competitors in the field will most likely keep returns on capital in the DTC segment at depressed levels for a very long time.

Moving on to the second problem with Disney’s bull thesis, it is the company’s massive IP library. The general statement that many of Disney’s franchises, including the corporate trademarks, are so strong that they will probably never go away tends to be true. Of course, many of Disney’s all-time favorite animations, cinematic universes, etc. will provide the company with long-term cash flow generating opportunities.

However, it is crucial to understand how much is worth paying for all this IP as the Media and Entertainment industry is subject to cycles and mean reversion processes, just as any other sector. 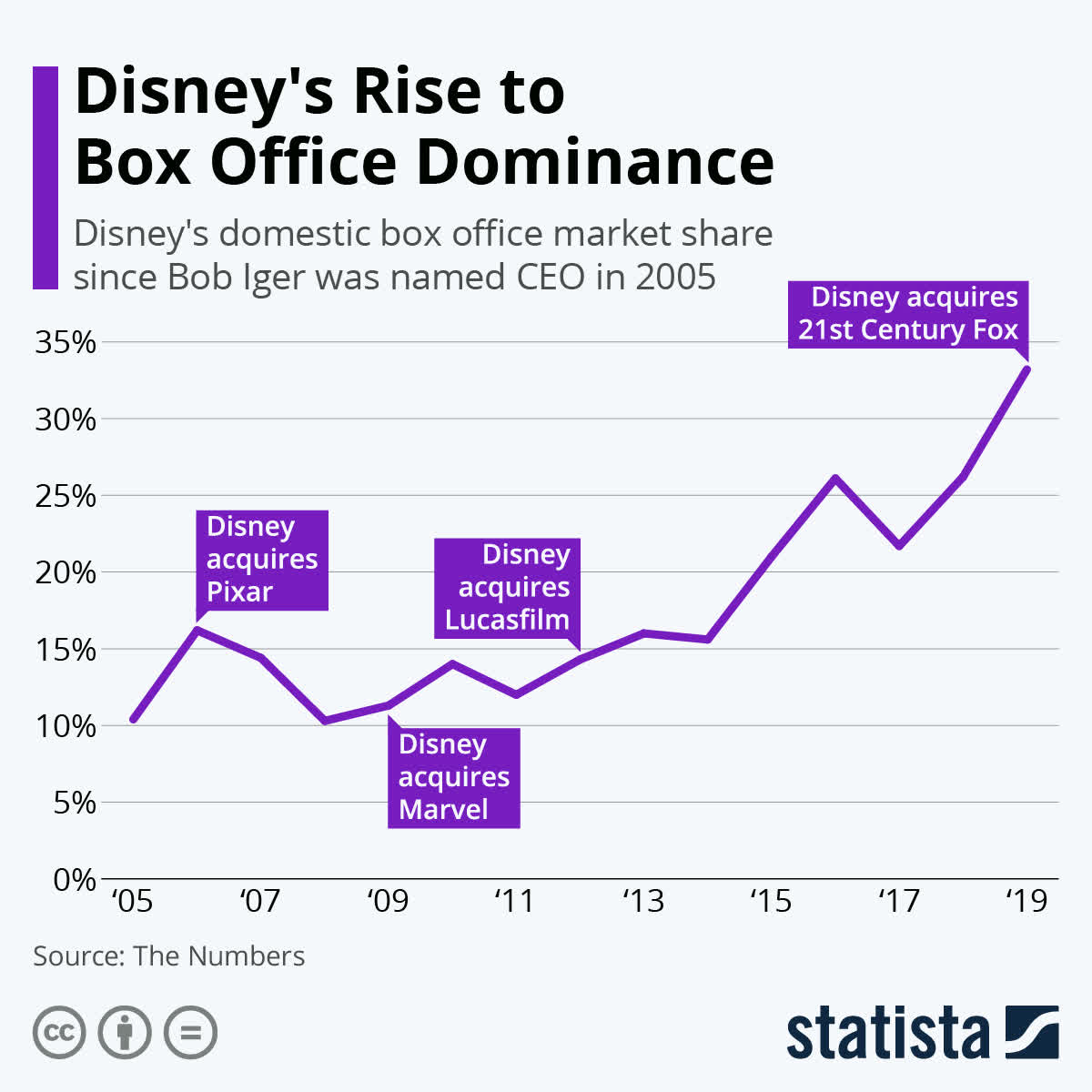 Why this is so important is that through the Studio segment, Disney is developing its IP, which is then again monetized through the company’s merchandize and theme parks. And although this is an important catalyst for Disney’s top and bottom lines at times of market share expansion, it could amplify problems at a time of declining market share.

As a non-commoditized and highly creative industry where barriers to entry are becoming less pronounced and more competition is entering the space in a meaningful way, dominant market share is almost impossible to retain over long periods of time, especially when faced with huge integration risks that I will cover below.

Historically, Disney’s market share in the U.S. Box Office has been in a positive relationship with the company’s P/S valuation multiple as higher market share in theatres also translated into better margins and higher top-line growth in the Parks, Experiences and Products segment.

There is a very high chance that this year will stand out from history for Disney as its market share for the year is still below 20%, while the company’s P/S multiple is hovering above x3.0.

Therefore, on the graph above, 2020 would most likely be plotted very close to two other periods – 2000 and 2014-15. Two periods that were followed by either a significant drop in Disney’s share price (the former) or years of sideways price movement (the latter).

To make matters even worse, Disney has massively increased its business risk recently with the massive acquisition of 21st Century Fox. Although the deal has some rationale in the light of creating a massive library for Disney’s DTC platforms, it did come at a hefty price tag, large integration risk and last but not least was done for very different reasons than many of Disney’s previously successful deals with Pixar, Lucasfilm and Marvel.

The chart below clearly illustrates just how much larger the deal was for Disney, when compared to its all other deals since 1996.

This led to a significant integration risk, alongside financial health deterioration in the light of the massive net debt increase.

Perhaps as a trailer for what the future holds, in the third quarter of FY 2020 Disney already recorded nearly $5bn worth of goodwill and intangible asset impairments in its International Channels business.

The current quarter charges included $4,953 million of impairments of goodwill and intangible assets at our International Channels business

Disney is facing a major and long transition of its decades-old business model to a more DTC-oriented approach to premiere and monetize its IP.

Just by itself, this transition is a process accompanied with many risks and uncertainties, even if the company successfully executes on its subscribers growth strategy. In addition, a flurry of new competition is entering the space in a meaningful way which would most likely put significant pressure on the company’s future profitability.

Potential peak in the company’s Box Office market share, massive business integration risk of the $71bn deal for 21st Century Fox, high debt levels, pandemic and recession related disruption of the theatre, theme parks and resorts businesses simply make the transition risk outlined above even higher. And last but not least, all that is happening while the valuation of the company is still gravitating near all-time highs.

With all that in mind, it is hard to see Disney’s risk-reward profile as anything else as being negatively skewed at this point.

Additional disclosure: Please do your own due diligence and consult with your financial advisor, if you have one, before making any investment decisions. The author is not acting in an investment adviser capacity. The author’s opinions expressed herein address only select aspects of potential investment in securities of the companies mentioned and cannot be a substitute for comprehensive investment analysis. The author recommends that potential and existing investors conduct thorough investment research of their own, including a detailed review of the companies’ SEC filings. Any opinions or estimates constitute the author’s best judgment as of the date of publication and are subject to change without notice.