Flaherty & Crumrine offers several funds in the preferred and fixed-income space. Flaherty & Crumrine Dynamic Preferred and Income Fund (NYSE:DFP) is one such fund that we are holding in our Income Generator portfolio at the CEF/ETF Income Laboratory. We acquired these shares with a trade alert on December 13th, 2019. The opportunity presented itself when F&C Preferred Securities Income Fund (NYSE:FFC) started trading at a 5% premium, while DFP was at a slight discount of 0.80%. The opportunity still remains even though DFP has now lifted to a small premium of 0.60%. Both funds are significantly similar and showed quite positive results over the long term and for 2019. DFP did slightly outperform FFC at about 1% total NAV and market return for the 2019 period.

DFP has an investment objective to “seek total return, with an emphasis on high current income.” F&C was founded in 1983 and specializes in the preferred securities space – and this is exactly what they do with this fund. I think preferred securities and fixed-income investments are a perfect addition to any portfolio. This is especially true when put into a CEF that can add instant diversification and the active management of a manager specializing in these particular investments like F&C. Since the manager has several funds that are quite similar, this is a perfect opportunity for utilizing our swap trades to gain alpha.

The fund has an inception date of 5/24/2013. So, in this particular fund, we haven’t seen them operate through a full market cycle and only have seen what the fund can do in bull market mode. However, their other funds have witnessed the 2008/09 GFC. At that time, we witnessed some significant drawdowns.

DFP has total managed assets of about $762 million. The fund does utilize leverage currently standing at 33.4% of assets. The expense ratio for the fund comes in at a reasonable 1.07%, when including leverage costs this comes to 2.90%. The leverage expense has been rising due to increasing interest rates over the last couple of years. The agreement in the latest report was defined as “one-month LIBOR plus 0.80%”. We could expect this to reverse course now since the Fed carried out several interest rate cuts throughout 2019. This would definitely be positive and could potentially increase net investment income [NII] coverage of the fund. We will discuss this further in detail below.

DFP currently trades at $26.76 per share, with an NAV of $26.60 leading to a slight premium of 0.60%. This also puts the fund at a 1-year z-score of 1.18, which isn’t terrible, considering the current valuations of basically every asset class. It is worth noting that the fund has a 5-year average discount of 3.63%. The discount has even dropped significantly further than this in the past too. So, I believe one needs to be comfortable with knowing that fact before deciding to put in an order to pick up a position. 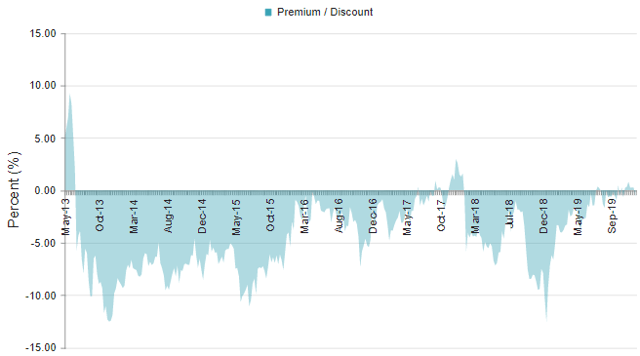 The selloff that we saw in December of 2018 would have been an exceptional time to pick up shares. In fact, in 2018, the NAV had a total return of -8.25% and a price return of -17.55%. This helps reinforce the fact that one may need a higher risk tolerance to invest in DFP – as we have experienced significant volatility. This, of course, is a function of premiums and discounts that we witness in the CEF space and the downside risk of utilizing leverage.

As mentioned above, the fund has only been around since 2013 and has only experienced a bull market mode. Taking a quick look at their other two funds FFC and F&C Total Return Fund (FLC), we can see the devastation those funds hit in the GFC. 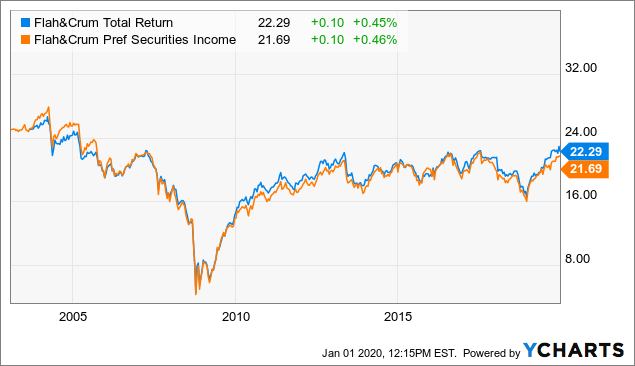 Past results are not a guarantee of what to expect in the future, but since the funds trade similarly, it is worth taking a look.

The fund currently pays out 6.41%, at a monthly rate of $0.143. The NAV’s distribution rate comes in at 6.45%. DFP has experienced a few distribution cuts over the last several years. I believe this has to do with interest rates increasing over the last few years. Again, this has now reversed direction in 2019, so we will have to wait to see if there is an improvement from their next report. This is the same thing that we discussed with a prior FFC article, the fact that when interest rates were increasing, the cost of leverage was also increasing, thus slowly eating away at NII coverage of the fund.

That apparent drop in last month’s distribution is an error, the payout was, in fact, the same $0.143. 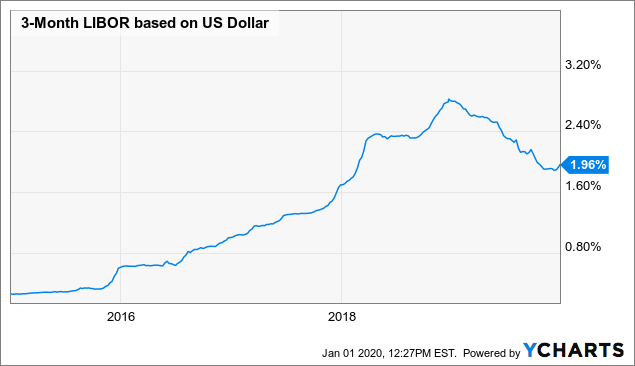 The above chart of LIBOR explains the ever-increasing expenses when leverage expense is represented. This has to do with their agreement for borrowings being LIBOR + 0.80%. Additionally, this explains why the distribution was cut over the prior few years. I don’t necessarily see this as a bad thing at all, though. Simply because it means management is aware and wants to proactively implement a sustainable distribution level. Remember that a preferred and/or a fixed income-focused fund needs to have healthy NII coverage or the fund can start to erode the NAV. In fact, DFP has been able to increase its NAV per share since its inception. This isn’t witnessed by too many other CEFs.

We can next take a look at a chart of NII compared to its distribution for the last several years to help further visualize what is going on underneath the hood. 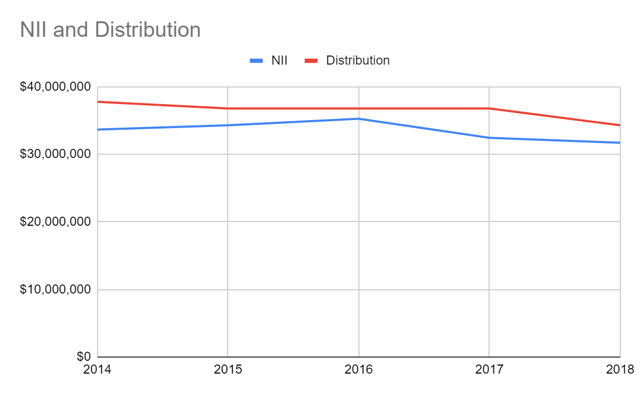 The fund does have a dividend reinvestment plan that can be taken advantage of when the fund is trading at higher premiums. This is similar to F&C’s other funds too. This hasn’t played a significant role in DFP of adding new shares and NAV to the fund, thus far. DFP also had a considerable amount of its 2018 distributions come in as qualified dividend income at 87.38%. This is beneficial as an investor has less of a tax burden come tax season.

In the case of holdings, DFP is largely similar to FFC. This adds to the emphasis on why they are such great swap candidates for our CEF/ETF Income Laboratory rotation strategy. The largest sector, by far, is the financial sector that they classify as “bank” and have a separate line for “finance.” These two added up almost 67% of the fund. This is followed by “insurance” companies with a weighting of 19.49%. 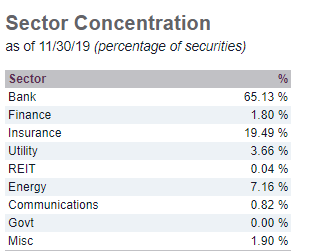 We have experienced significant volatility in the fund, as covered above. However, it is important to consider that the fund will act differently than these sectors’ common stock counterparts. Here, we are more rate sensitive in the preferred and fixed-income space. This isn’t to say that the large financial institutions aren’t also impacted by interest rates. As we know, they can be – through deriving a significant portion of their profits through interest rate spreads. This applies to financial institutions that have considerable loan business on the books. 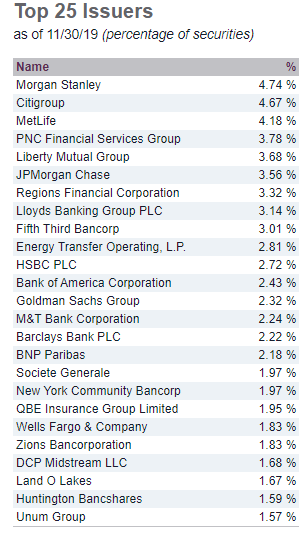 The top 25 issuers are shown above. It is littered with some of the largest financial institutions that we have in the U.S. and the world. These are companies that are probably not going anywhere anytime soon! Then, there are a plethora of regional financials included as well. This is followed by some sprinklings of non-financial company issuances weaved in. These lesser-known companies are what helps juice the yield for DFP shareholders. Of course, the fund’s underlying use of leverage helps with that too.

This helps lead us into the discussion of the credit quality in the fund’s underlying holdings. This is split pretty evenly between just above junk and just below junk. 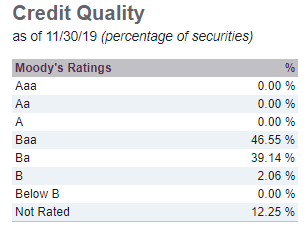 As seen above, 46%+ of the fund is held at a credit quality that’s one notch above junk status. 39.14% is held at one notch into junk territory, then is followed up by 2.06%, which is another rung lower. Finally, 12.25% of the portfolio’s holdings are not rated. Unrated debt doesn’t necessarily mean that it is junk, although unrated debt does primarily come through from smaller companies that can be less established. A reason for not wanting to pursue a credit rating for issuance of debt has to do with the fee associated with having one of the major credit rating agencies assign a rating.

One question that may pop up is why the credit quality is what it is. After all, many of those large financial institutions have much higher credit ratings like Morgan Stanley (NYSE:MS) and Citigroup (NYSE:C). This has to do with the different issuances that DFP is investing in. These are subordinated debts and issuances and, thus, will not be first in line to receive payment back in the event of a default. This is reserved for senior debts.

Overall, this is a solid fund that has been able to deliver in the past and should continue to do so. With that in mind, we have experienced quite a bit of volatility with DFP. If one has a low threshold for big swings in price, this fund may get a pass from those investors. On the other hand, these swings would have been exceptional buying opportunities. These periods can also be positive if one already holds a position to take advantage of averaging down their cost basis.

The fund offers investors a 6.41% distribution rate. We have witnessed cuts over the past few years, but these were mostly prudent for long-term sustainability. A major factor attributing to these cuts were from the increase in borrowing costs for DFP. Interest rates were being raised, and DFP’s agreement is based on LIBOR + 0.80%. We should anticipate that their next Annual Report should show falling leverage costs. A distribution cut can’t be ruled out completely, but if they do decide a cut is prudent, it shouldn’t be significant.

Flaherty & Crumrine have a solid line-up of preferred/fixed-income funds. We have been able to utilize our rotation strategy easily with these investments. We have been continually increasing share counts by capturing divergences between their fund’s valuations.

Disclosure: I am/we are long DFP. I wrote this article myself, and it expresses my own opinions. I am not receiving compensation for it (other than from Seeking Alpha). I have no business relationship with any company whose stock is mentioned in this article.

Additional disclosure: This article was originally released on January 2nd, 2020 to members of the CEF/ETF Income Laboratory.