Back in May, we wrote an article about Deutsche Lufthansa (OTCQX:DLAKY) (OTCQX:DLAKF), where we stated that the airline will survive the pandemic. In late June, Lufthansa shareholders finally approved the bailout package that was proposed by the German government and it’s now certain that the company is not going to become bankrupt. While the state aid diluted the existing shareholders since the German government got 20% of the company, investors were able to save their investments in Lufthansa. With enough liquidity, Lufthansa is able to operate at a loss, wait for the air travel to recover to its pre-COVID-19 levels, and not worry about the liquidity crunch. However, the airline’s major goal in the next few years would be to repay the government its loan and that will leave no room for the creation of shareholder value. For that reason, we continue to believe that it’s better to avoid Lufthansa’s stock at the moment and look for other opportunities, as no dividends are going to be paid anytime soon and the stock could continue to trade in a distressed territory until the end of the year.

The pandemic predictably disrupted Lufthansa’s business in the first half of the year and the management had no other choice but to cancel dividends for 2019, while the company’s stock tumbled to its all-time lows. Our latest article on the airline stated that Lufthansa will be bailed out due to its importance to the German economy and that’s precisely what happened in late June. During the annual meeting, shareholders of Lufthansa had no other choice but to approve a €9 billion bailout package, which will dilute their holdings but keep the airline alive. According to the deal that was signed between Germany and Lufthansa, the German government will take a 20% stake in the company and is eligible for two board seats. At the same time, the executive team will have reduced salaries and no bonuses until the debt portion of the bailout package is repaid. Out of €9 billion, €300 million are in a form of a direct equity stake, €3 billion in a form of a direct loan, and the rest in the form of silent participation, which is a mix of debt and equity. Here’s how AirlineGeeks describes it:

For Lufthansa, these silent participations include 4.7 billion euros in equity and will last for an unlimited amount of time. The carrier will have control of the termination and can choose to stop the participation at the end of any quarter, should they desire to. The remuneration for the silent participations starts at four percent for 2020 and 2021 and can rise annually until a cap of 9.5 percent is reached in 2027.

The biggest downside of the deal is that Lufthansa needed to give away 24 of its slots in Frankfurt and Munich airports, which act as major transportation hubs for the airline, to please the EU’s antitrust watchdog and get the approval of the deal. However, the other choice would’ve been to declare bankruptcy, which wouldn’t benefit anyone.

The latest earnings results showed the harm that the pandemic has done to Lufthansa. In Q2, the airline’s revenues were down 80.3% Y/Y to €1.89 billion, while its traffic was also down 96% Y/Y, and the total net loss was €1.49 billion. At the same time, the airline’s average monthly cash burn was €550 million, while its load factor under a reduced capacity was only 56%, a decrease of 27% from a year before.

Despite the loss, Lufthansa ended the quarter with €11.8 billion of liquidity, as it was able to receive bailout money. To preserve cash, it decided to cut 22,000 jobs and also reached a deal with the German Ufo union to cut the pay and layoff some portion of its workers, which will result in €500 million in savings. However, even with those savings, Lufthansa will still have an overleveraged balance sheet, as its adjusted net debt/EBITDA ratio is 10.3x. The airline also has a net debt position of €7.31 billion and its goal in the next years would be to repay all the loans first before rewarding its shareholders with dividends, which made the stock an attractive investment before the pandemic. 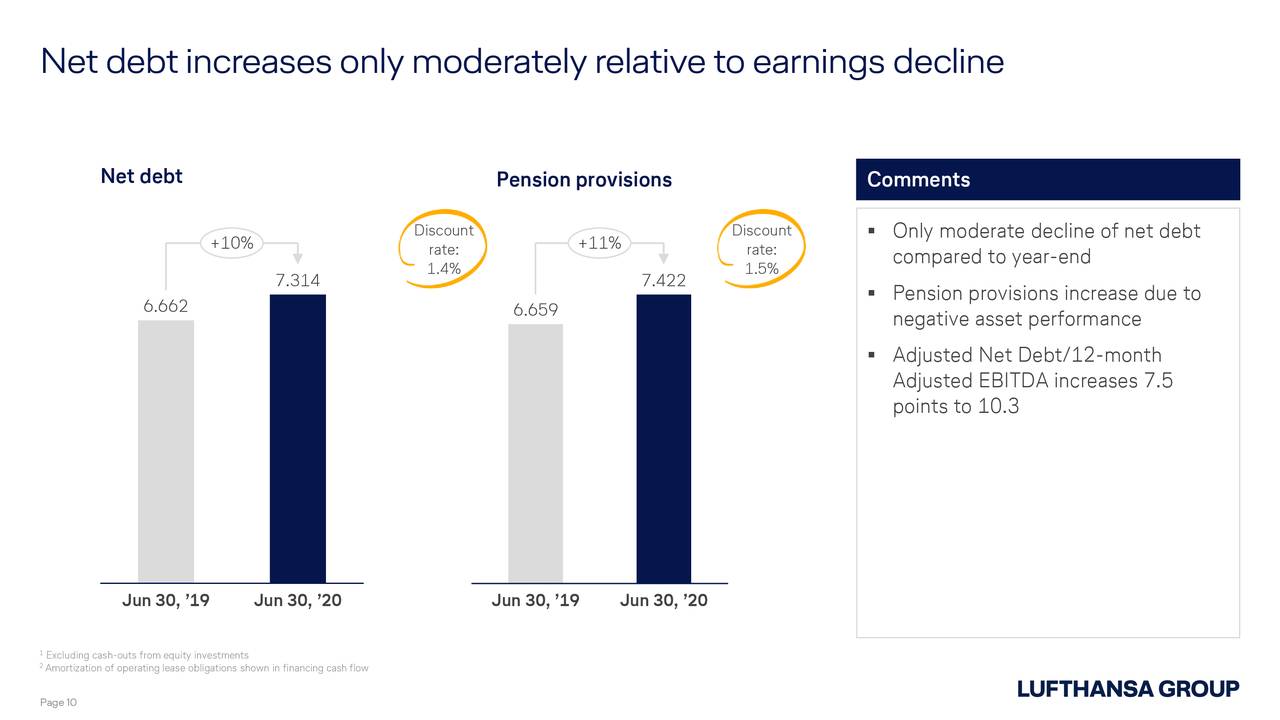 Going forward, the major risk for Lufthansa will be its exposure to political headwinds. While the upcoming second wave of the pandemic will hurt the bottom line of every airline in Q3 and Q4, we know that Lufthansa has more than a year of liquidity even if it continues to burn cash at the current rate and it will not become bankrupt. For that reason, politics will have a greater impact on its performance in the foreseeable future. By having two state representatives on Lufthansa’s board and being one of the biggest shareholders of the airline, the German government could force the airline to enhance the implementation of its carbon-neutral policy, which will hurt the airline’s earnings in the short term, as it will lead to more expenses. At the same time, the airline’s subsidiaries in Austria and Switzerland are also exposed to political headwinds. A couple of months ago, Austrian Airlines received a total of €450 million in loans and state aid from the Austrian government, and in exchange, Lufthansa promised not to close the airline’s Vienna hub. At the same time, SWISS also received a €1.4 billion loan, but in exchange, the whole airline was put as collateral. Considering all of this, state politics will play a substantial role in every major decision that Lufthansa’s board will make in the future.

Despite all of this, Lufthansa will remain one of the strongest airlines in this distorted market environment. As its competitors are on the brink of collapse, Lufthansa can continue to operate at a loss and not worry about its underperformance. With enough liquidity, it could also quickly expand, as others will struggle to stay afloat without substantial help from their respective states. At the same time, Lufthansa got a better bailout package in comparison to Air France-KLM (OTCPK:AFRAF), as it doesn’t have as many restrictions as its French counterpart. With additional working capital, Lufthansa is poised to recover faster in comparison to others, as its EBIT and net income margins are better than the industry’s media.

However, Lufthansa’s upside will be limited in the next couple of years. By the end of the year, the airline’s short-haul and long-haul capacity will not return to its 2019 levels, and it’s unknown whether it will be able to do so in 2021. 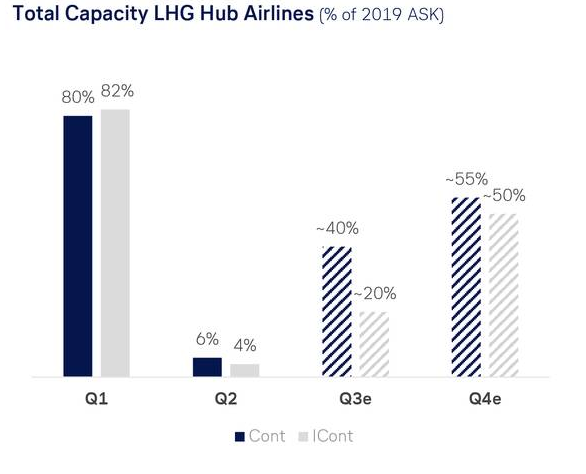 At the same time, business travel, which was the company’s major source of income, will lag in recovery in comparison to leisure travel, which will also hurt Lufthansa’s bottom line. Currently, the airline’s management expects the demand for air travel to return to its pre-COVID-19 levels only in 2024, which is in line with IATA’s forecast. Lufthansa also expects to have an operating loss this year, and it will not be profitable anytime soon. Considering that the management’s goal would be to repay its loans as fast as possible to deleverage its balance sheet, shareholders should forget about any rewards in the next couple of years. While Lufthansa will survive the pandemic, its recovery will be long and painful, while the upside will be limited in the upcoming years. For that reason, we stick with our opinion that it’s better to avoid the airline’s stock.

The goal of the service is to provide you with actionable short ideas from which you can profit by betting against the companies that trade at irrational exuberance levels and have limited upside. While the Fed continues to pump the stock market, there is still an array of businesses that cannot justify their premium valuations and our goal is to find those businesses. If you have a high-risk tolerance and interested in shorting stocks, then this service is for you.