In my last article on DBS (OTCPK:DBSDY), dated 27 November 2019, titled “Headwinds On The Horizon“, I concluded that I saw further potential headwinds coming from weaker economies in both Singapore and Hong Kong.

The stock is only down 1.4% since my last article, despite the general correction in the market as a result of the coronavirus.

This article will go through the main points of the results, and highlight the economic environment in their main markets, namely Singapore and Hong Kong.

Fee income for the full year increased by 10% to SGD 3 billion, however, when we compare just the fourth quarter with the third quarter, we can see a decline of 9%.

In my last article, I did raise some concerns about a potentially lower NIM this year. This was based on management’s earlier indication of expected lower NIM. They did record a decline of four-basis-point, quarter on quarter, in net interest margin from falling interest rates. NIM came in at 1.86% 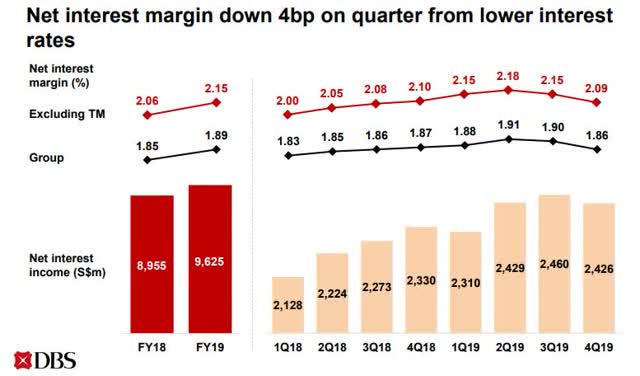 Regarding their balance sheet, the non-performing assets (NPA) fell 3% to SGD 5.77 billion for the year.

Unexpectedly, the Board proposed to increase the final dividend by 10% from 30 cents to 33 cents per share. This puts the annualized dividend at $1.32 per share, which yields 5.18% based on today’s stock price of SGD 25.50

Our record performance with ROE at a new high of 13.2% demonstrates a franchise that delivers high-quality results. The increased quarterly dividend proposed by the Board reflects the enhanced capacity of our business to generate earnings and reward shareholders.”

The other day, I had an interesting, albeit short, exchange of opinion with a fellow commentator here on SA. In an article about REITS, he said that he was “bullish on Singapore”, and said he was investing in BlackRock’s managed ETF (EWS).

His argument for investing in EWS was based on the past performance of our good government and the fact that valuations and yields here are more favorable than that of the American stock market. I don’t really disagree with that conclusion. Nevertheless, I do think that you can have a great government, even if you have a business environment which is not particularly profitable.

The Singapore economy posted a modest uptick in GDP in the last quarter of 2019, coming in with a growth of 0.8%, making the YoY growth of 0.7%.

It would be more useful to look at a longer time frame, like the last 25 years. What is the trend? 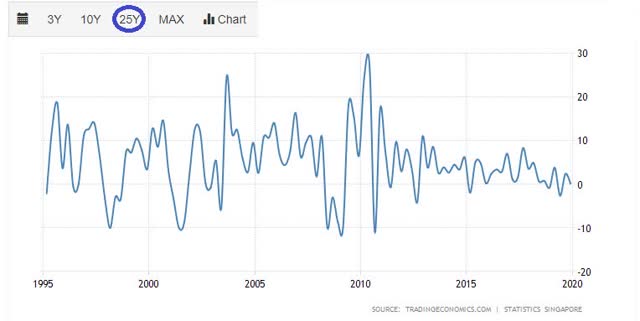 Singapore is a highly developed economy. The price of their currency Singapore Dollar is not based upon freely traded supply and demand, such as that of the US Dollar. The Monetary Authority of Singapore uses a basket of currencies and is allowed to fluctuate within an unspecified band. The Monetary Authority regulates the Singapore dollar by buying or selling it when it goes outside of this band.

This meant that with the strengthening US Dollar, which we have seen over the last few years, it has resulted in a strong Singapore Dollar in relation to many other currencies. That is good for a country’s import, but it also does make Singapore’s export less competitive.

I have noticed over the last week that consumers here in Singapore are not frequenting restaurants and shopping malls the way they used to do. I went to one of our favorite restaurants last Saturday, with my wife. Usually there is a waiting time to get a table. This time – no such thing. It was not even half full. If this prevails, we can easily get back to the situation we had in 2003, when SARS was the thing to be scared about. According to the Singapore Tourism Board, roughly 4% of Singapore’s GDP comes from the tourism industry.

Hong Kong is still grappling with disruptive riots, although to a much less extent, as concerns have shifted more away from a call for democracy to health issues.

It has not been easy for Hong Kong people. On top of the six months of disruption to many people’s daily life, they now also have to deal with the outbreak of the coronavirus. Many Asian countries got hit by this. It is interesting to note that Singapore has more known cases of coronavirus than Hong Kong, despite the fact that Hong Kong borders with China, and as such has a much large movement of people and goods between the two. Perhaps there is a difference in how they count.

However, it is clear that the economy of Hong Kong will get hit by these two events.

Hong Kong’s GDP is expected to come in at – 2.9% (year on year) in the fourth quarter of 2019. The final numbers will only be released on 26th February.

More importantly than just the last quarter is the alarming trend over the last 3 years, as can be seen from the following graph: 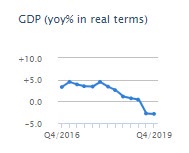 The numbers delivered by DBS was certainly good. But as we know, accounts show what has happened in the past and we as investors are most interested in what is most likely going to happen in the future.

We can only assess the exact effect on the economy from the coronavirus outbreak when companies start to report 1st Quarter results. More concerns are the effect it will have on SME’s which are private companies. They do not report to anybody, and they are important in terms of employment. I do not want to sound pessimistic. Eventually, all things pass. It is certainly not the end of the world.

I did make a small investment in DBS two days ago. Before adding to this position, I would like to see some “normalcy” returning to China, with factories ramping up production and resumption of importation of raw materials. Hopefully, this, and a reduction in new cases of coronavirus, will positively influence consumer confidence in Singapore and Hong Kong.

The risk to the thesis is that despite the fact that DBS is fundamentally very solid, they are vulnerable to a prolonged downturn in Singapore and Hong Kong’s economy.

I will HOLD at this moment in time, but I will add more shares of DBS once there is more clarity.

Disclosure: I am/we are long DBSDY. I wrote this article myself, and it expresses my own opinions. I am not receiving compensation for it (other than from Seeking Alpha). I have no business relationship with any company whose stock is mentioned in this article.

Drew Angerer/Getty Images News Transitory disinflation Fed Chair Jay Powell warned that the current trend of “disinflation” will be transitory at the press conference after the FOMC meeting on Feb. 1: If you take very […]

hapabapa Fiserv (NASDAQ:FISV) is often seen as a slow-growth business with a significant share of legacy services and challenged profitability. Since I have been following the stock, investor sentiment has been mostly neutral to slightly […]