Equity markets fell during Asia-Pacific trade after the US government stated that Russia and Iran have attempted to interfere in the US presidential election.

The haven-associated US Dollar and Japanese Yen outperformed their major counterparts, while the risk-sensitive Australian Dollar dipped back below the 0.71 mark.

Looking ahead, US jobless claims data for the week ended October 17, and existing home sales for the month of September, headline the economic docket.

A record surge in coronavirus infections has notably weighed on the performance of Germany’s benchmark DAX 30 index, falling over 5% in the last week as the 7-day moving average tracking the nation’s Covid-19 cases rises to its highest levels since the pandemic began.

With infection numbers climbing by a record 11,200 on October 21, fears of the imposition of economically-devastating measures are beginning to notably weigh on regional market sentiment.

Angela Merkel and the mayors of Germany’s 11 largest cities agreed to introduce new restrictions for those municipalities deemed by the government as having a “high concentration” of Covid-19 cases, with the Chancellor imploring residents “to refrain from any trip that is not really necessary, any celebration that is not really necessary [and] please stay at home – wherever you are, whenever possible”.

Indeed, the impact of tightened restrictions in several major regions is reflected in high-frequency data, as all three mobility trends – walking, driving and transit – continue to decline since peaking in the middle of September. 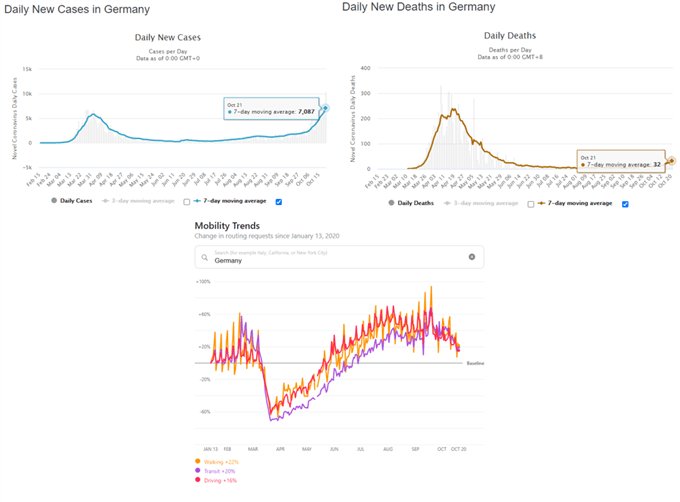 Although German Health Minister Jens Spahn has ruled out a potential nationwide lockdown, given that “we more know than we knew [in March]”, the ability of local jurisdictions to almost instantaneously impose restrictive measures is clearly beginning to concern regional investors.

The risk-gauging yield spread between Italian government bonds and German Bunds has notably widened since setting the post-crisis low on October 13, while the DAX 30 volatility index (VDAX) spiked to its highest level since mid-September.

Therefore, local health developments may continue to dictate near-term price action, with a marked surge in cases increasing the likelihood that restrictive measures will be introduced and in turn potentially discounting the DAX 30 index. 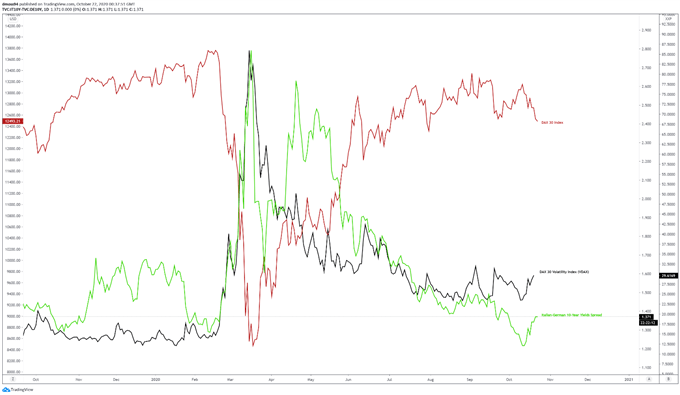 Europe’s ‘safe haven’ asset, the German 10-year Bund, appears to be gearing up to extend its 10-day surge higher from the monthly low set on October 7 (104.93), as price remains constructively perched above key support at the 61.8% Fibonacci (105.84).

The development of the RSI hints that further gains may be in the pipeline, as the oscillator holds above 60 despite markedly reversing lower from its first entry into overbought territory since early March.

Moreover, with price tracking firmly above the 21-, 50-, 100- and 200-day moving averages and continuing to travel within the confines of an Ascending Schiff Pitchfork, the path of least resistance seems skewed to the topside.

With that in mind,a push to retest the monthly high (106.20) looks likely in the coming days if the 61.8% Fibonacci (105.84) continues to stifle selling pressure, with a daily close above the 106.50 mark probably carving a path to test resistance at the 100% Fibonacci expansion (107.06) and coinciding with a period of sustained risk aversion, and in turn potentially triggering a marked discounting of Germany’s benchmark DAX 30 index. 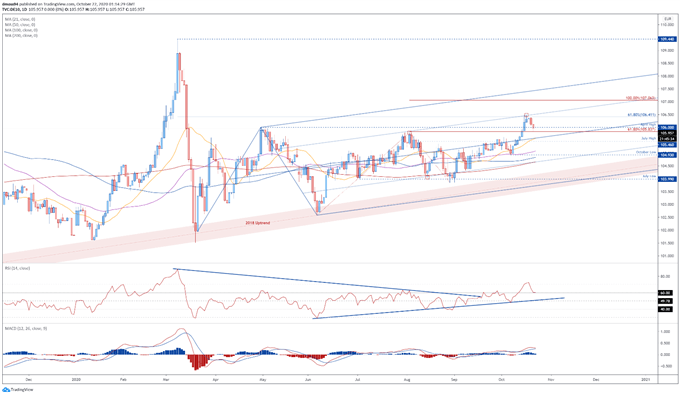 Germany’s DAX 30 index could be at risk of extended declines as it carves out a potential Head and Shoulders reversal pattern, as buyers failed to successfully overcome key resistance at the yearly open (13126.5).

With the MACD indicator sliding further into negative territory and the RSI diving below 40, the outlook for the regional benchmark index seems relatively bearish. 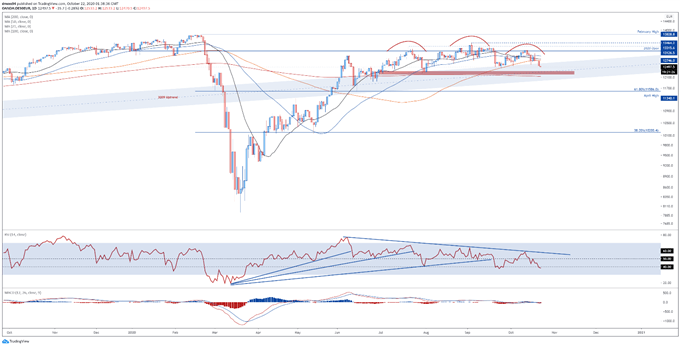 Fundamental Euro Forecast: Neutral EUR/USD is back again to within touching distance of the 1.20 level that is seen by analysts as the line in the sand that has been drawn by the ECB. That […]

If we compare the market structure of the two kinds of markets to the function of market instruments traded there, we can ask, “Does form follow function?” There is a missing market type. The article […]