Crude oil prices slipped in Tuesday’s Asia Pacific session with risk appetite dented by both a credit-rating downgrade for Hong Kong and by increased worries over the spread of coronavirus.

Moody’s took Hong Kong’s rating down to Aa3 from Aa2, citing weaker institutional and governmental scores than those previously allotted in the wake of prolonged pro-democracy protests in the territory.

The World Health Organization said it would meet later in the day to discuss the outbreak of coronavirus, a new disease in humans which causes pneumonia-like symptoms and can be fatal. Cases have spread out from China where they were first recorded, reaching as far as Japan and Thailand. The outbreak has come just as millions of people will be moving both within China and further afield to celebrate Chinese new year at the end of this week, raising obvious transmission problems.

Oil prices had risen on Monday as markets eyed production shutdowns related to unrest in Libya, but its gains could not hang on as investors moved away from pro-cyclical assets and into perceived havens like the Japanese Yen instead.

Gold prices also got a boost, predictably enough, with the market already supported by year-end buying out of China and by Monday’s lethal rocket attack by Iran-aligned Houthi militants in Yemen which has kept Middle Eastern geopolitics on the radar.

The main local economic event was the Bank of Japan’s monetary policy decision which resulted in no change to the ultra-loose setting markets have long been accustomed to. The BoJ increased its 2020 growth forecast very moderately but downgraded its inflation call in a generally expected move.

The rest of the session will offer little in the way of first-tier economic numbers but UK employment figures and Germany’s ZEW survey may attract attention.

Crude oil prices continue to be underpinned technically on their daily charts by a band of support composed of the third and fourth Fibonaacci retracement levels of their rise to January’s peaks from the lows of October last year.

That band’s upper boundary has yet to give way to the bears on a daily-closing basis even though the market is clearly very close to it. Should prices trade durably back into that band its unclear how much defense would be mounted of its lower reached as they really only have support from December 3’s daily close at the range base to rely on.

The lows of late November might come into focus quite quickly if that level is seen.

The market has seen relatively narrow daily trading ranges since the steep fall and recovery seen in early January. However prices have not fallen far despite broad improvements in risk appetite which came before and after last week’s signing of an interim trade deal between China and the United States. 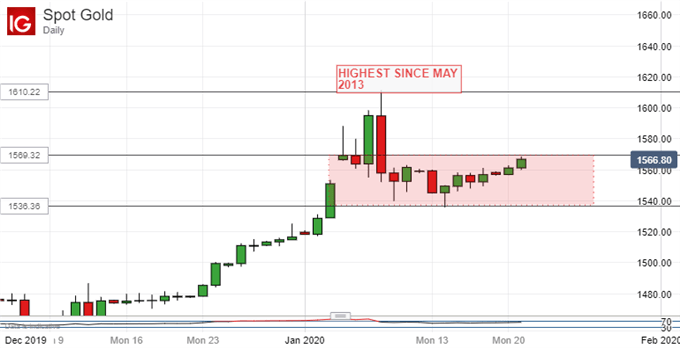 Prices are holding up quite close to this year’s notable highs, with January 5’s closing top of $1,536.36 providing near-term resistance on the way back up, as the upper boundary of the current trading range.

A durable break above that would bring those near-seven-year highs back into play.

© Reuters. Here are 7 head-turning deal dispatches from the past week, as covered first on InvestingPro+. 1. Arco Platform (NASDAQ:) announced it had received a non-binding going private proposal from General Atlantic and Dragoneer […]

Title: Weekly Fundamental US Dollar Forecast: Worst Month Since 2010, Was it Overdone? Teaser: The US Dollar saw its worst month since September 2010 as the markets aggressively priced in a dovish Federal Reserve down […]