Oil prices were higher in Asia Pacific trade on Monday thanks to news of an agreement to cut production reached by the Organization of Petroleum Exporting Countries and allies including Russia, the so-called ‘OPEC Plus’ group.

The largest single output cut in history comes in response to demand destruction stemming from the coronavirus’ spread. It is intended to see 9.7 million barrels drained from the market every day from May 1. The decision markets the end of a dispute between Saudi Arabi and Russia. The two oil-export titans failed to agree on reductions at the start of March leading to a price war which battered prices and threatened to overwhelm storage facilities with a wave of cheap crude.

However, with the coronavirus still forcing widespread economic lockdowns and preventing economic agents from engagement with customers, energy demand remains highly uncertain and oil prices remain less than half the $60/barrel commanded as 2019 bowed out.

Overall risk sentiment has been fragile in Asia with markets looking with some trepidation toward the US corporate earnings season.

Despite this, gold prices inched lower through the session although they remain close to one-month peaks and within striking distance of the multi-year highs scaled in early March.

This market has seen some cashing out, reportedly as investors sold to cover losses in other, riskier markets, but despite that impetus gold retains a strong underlying haven bid which is unlikely to evaporate in the ultra-low interest rate environment which coronavirus has ushered in. Non-yielding gold tends to do best when the yields on other high-quality assets are also low.

Demand worries remain clearly evident in the US crude oil market with even this large reduction in output unable to shake the market free of the narrow daily range which had been forming for more than a week.

Be aware though that many potential market participants will be away for holidays, with many key markets closed for the Easter break on Monday and that there could be some delayed reaction. For now though, psychological resistance at the $30/barrel mark is proving tough for the bulls. While it eludes them on a daily closing basis then the gravity of the range base at $26.61 will continue to act on this market. 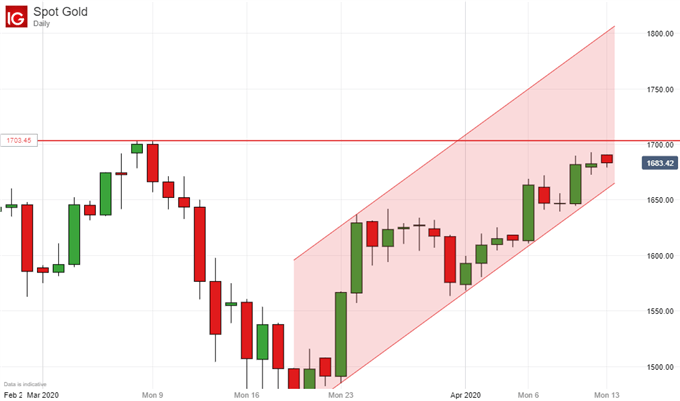 Gold prices’ daily chart shows that the well respected uptrend from late March still holds sway. A retest of the March peaks will probably be attempted in the next day or two should it continue to do so, although the market may be wary that some profit taking could creep in if they’re topped.

Near-term channel support comes in at $1660.73. That’s quite far off by the standards of current daily ranges, but it’s certainly reachable in thinned markets. However it might be advisable to await confirmation of any near-term test when trading desks are back to fuller strength later in the week.

I was going to start a new thread about October and noticed this one, so I will just post here. October, I hear has a bad reputation, so should I be n.. n.. nervous? Interested […]