Crude oil prices rose in Asia Friday on hopes that at least portions of the US economy can emerge from their coronavirus-inspired lockdown earlier than had been feared.

US President Donald Trump on Thursday issued guidelines on a phased re-start, but of course precise timing is impossible to pin down and will depend on the success with which the contagion can be halted.

There was a broad revival in risk appetite in Asian hours. US stock futures surged in response to reports that Pharmaceutical company Gilead which has been testing one of its drugs as a potential coronavirus treatment has had some early success in trials.

This was more than enough to offset any gloom engendered by China’s official Gross Domestic Product numbers. These duly delivered the first contraction seen since 2012, and deeper output falls than had been forecast. However, they were released as part of a mixed bag of data which saw March industrial production under much less duress than markets had feared even as retail sales collapsed.

Still, crude oil markets still look headed for a second straight week of falls, despite recent production cuts. Demand destruction as a result of the contagion continues to glower over the energy space. The Organization of Petroleum Exporting Countries (OPEC) has lowered its forecast for 2020 global oil demand and warned that more revisions may come. It now sees a demand contraction of 6.9 million barrels per day, having predicted a modest increase before.

Gold prices fell on the broad risk appetite revival although, as usual, there seemed little prospect of a meaningful dent in the strong haven bid the metal enjoys.

The coronavirus has reportedly seen gold consumption hit a three-decade low in India as the lockdown has kept stores closed through festivals and the crucial wedding season.

The rest of the global session won’t offer markets any likely shattering data points but official Eurozone inflation figures may remind gold investors that, while there seems little need for the metal as a hedge against rising prices, bond yields won’t be rising soon either. That prospect. often lends support to non-yielding gold.

Crude oil prices have retreated from the $30/barrel psychological resistance point and slipped below previous support at $26.61. They remain quite close to that latter point, however, but if they can’t regain it by Friday’s close then the break may be conclusive. That would in turn put focus on the March lows near $20, but the market seems in no hurry to retest these once again. 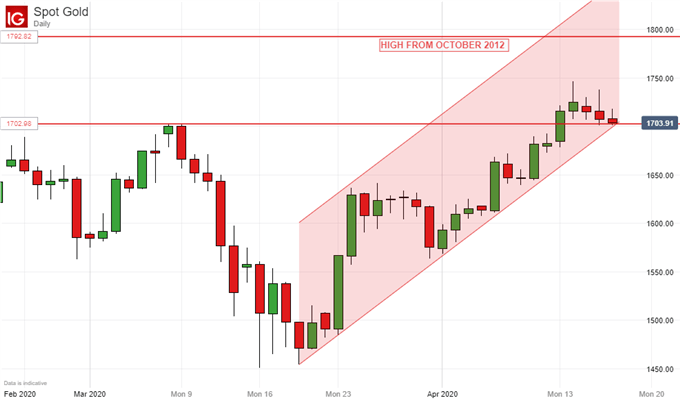 Gold prices seem to be headed back toward support at $1702.98, the year’s previous high set on March 8 and surpassed on April 13. Should they end this week below it then focus may return to the $1600 level last seen in the early part of the month. Under current fundamental conditions the market seems unlikely to fall much further than that in the near term, even if there’s little appetite to push on toward the highs from 2012 which lie just above current levels.