Crude oil prices continued to fall on Thursday after very sharp slides in the previous session as investors withdrew from such growth-correlated assets on concerns at the spread of Wuhan-strain coronavirus.

The disease has reportedly killed seventeen people since emerging in the now-quarantined Chinese city in late 2020, with cases suspected or confirmed as far away as Japan and the United States. The Sudden Acute Respiratory Syndrome (SARS) pandemic of 2003 also began in China, hitting economic growth and seriously reducing air travel. Although there is no way to tell how or even if this latest virus will compare, markets are fragile.

Crude oil prices were also weighed down by Wednesday’s news of a surprise inventory build in the US. The Energy Information Authority said that 1.57 million barrels had been added to stocks, confounding market expectations of a million-barrel drawdown.

Gold prices were modestly lower on the day, apparently unable to capitalize on weakness in risk sentiment elsewhere. However, they are also effectively steady on the daily chart and remain close to this month’s peaks which are also near-seven-year highs.

If the coronavirus story will permit the market will look to the European Central Bank’s January monetary policy decision which is due later in the global session. The ECB is not expected to offer more accommodation, but its President Christine Lagarde may well strike a dovish tone. That could offer the support gold customarily gets from loose policy outlooks.

Prices have retraced close to seven-week lows, with Wednesday’s notable down day taking out the entire retracement support band which had previously survived quite a few tests. With that out of the way late November’s lows in the $54.79 region are in the bears’ sights as immediate support with the entire rise up from October 3’s two month low of $51.05 likely in question if they give way.

Gold prices’ impressive ascent has clearly slowed somewhat in the last three weeks, with narrow weekly ranges perhaps indicative of a market rethink of the impulse which saw gold rise to the notable highs of early January. 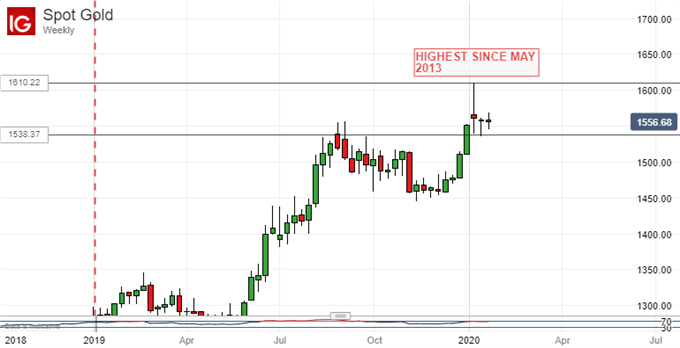 However, there’s equally clearly no impulse to take much profit at current elevated levels and, while the coronavirus story dominates the headlines, it is tough to see gold heading much below psychological support in the $1500/ounce region which has held since late December.

Andrew Burton Since my last buy rating on Alibaba (NYSE:BABA), the stock has risen 30% and this article aims to look deeper into the company to determine what the outlook for the company is for […]