After having checked DuPont de Nemours (DD) and not being impressed with its share price and current valuation, I wanted to have a closer look at its historical spinoffs as well. Corteva (NYSE:CTVA) was spun out from DuPont in 2019.

In the first half of the year, Corteva reported total revenue of approximately $9.15B, an increase of just over 2% compared to the first half of 2019. It was a nice surprise to see a revenue increase in the first semester as the first quarter really saved the day considering the Q2 revenue fell by almost 7%.

Fortunately Corteva also was able to reduce its COGS by the same percentage during the second quarter, and although other expenses increased, Corteva was still able to report a higher operating income (up $91M compared to Q2 2019). Hardly a surprise as the Q2 2019 results included about $330M of separation expenses related to Corteva being spun out from DuPont. The net income in Q2 attributable to Corteva shareholders came in at $760M, which is approximately $1.01/share. That’s much higher than expected thanks to the low tax bill (an average tax rate of 9%).

Looking at the financial results in the entire financial year, the operating income of $1.25B was clearly much higher than the $502M in H1 2019, and even after taking the $542M of separation expenses incurred in H1 2019 out of the equation, the H1 2020 performance would still be much higher than in H1 2019 despite incurring close to $250M in restructuring expenses in the first half of this year.

The net income attributable to the Corteva shareholders in H1 2020 was approximately $1.05B for $1.37/share. Definitely not bad but again, Corteva’s strong first quarter saved the day here.

Considering some of the expenses are non-cash expenses, I also wanted to see what this accounting profit meant for the free cash flow result of Corteva.

In the cash flow statement, we see Corteva reported a negative operating cash flow of $869M. That’s nothing to be worried about as the company traditionally has to invest a lot of money in its working capital in H1, which subsequently gets released in the second semester. Adjusted for the almost $2.6B investment in the working capital position, Corteva reported an operating cash flow of $1.72B. 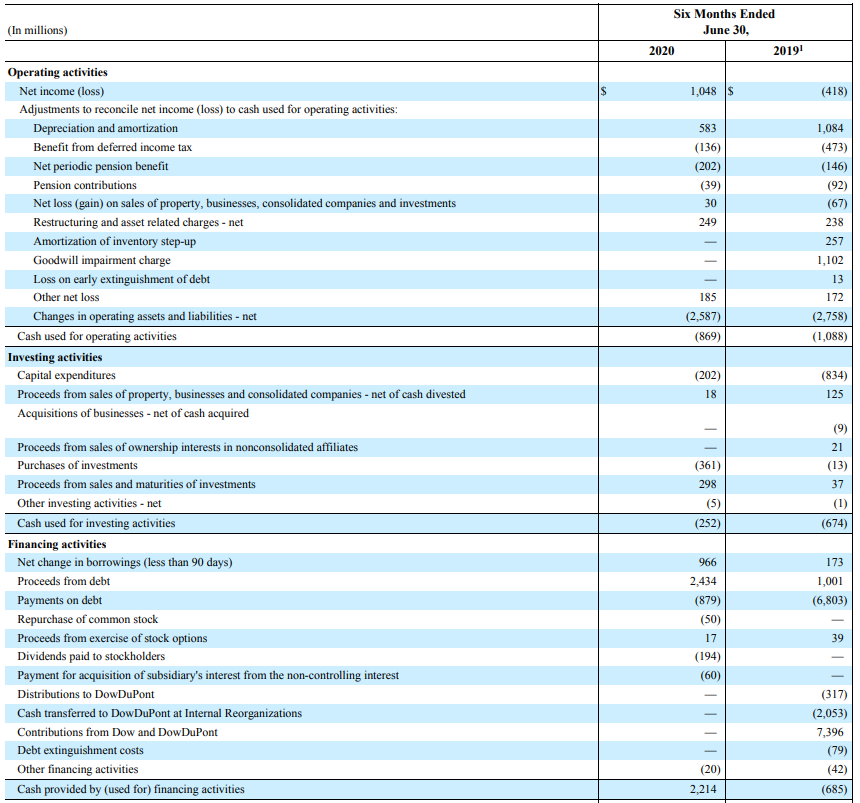 And after taking the $202M in capex into account, the free cash flow result in H1 2020 was in excess of $1.5B. Granted, this excludes $249M in restructuring charges which were expensed but haven’t lead to a cash outflow yet, but it also includes in excess of $100M in the payment of deferred taxes and in excess of $200M in payments to the pension fund (which still has a deficit of just over $6B as of the end of June).

The balance sheet: No financial net debt, but a high pension deficit

For the entire financial year, Corteva is expecting the EPS to come in at around $1.25 and $1.45 per share on an EBITDA of $1.9-2B. Considering the H1 2020 EBITDA and EPS already reached those levels, we should be expecting a relatively flat performance in the second half of the year.

As of the end of June, Corteva had $1.53B in short-term debt and approximately $1.1B in long-term debt. $1B of the longer term debt was issued in the first semester and has an average coupon of 2%. Low-cost debt, indeed. 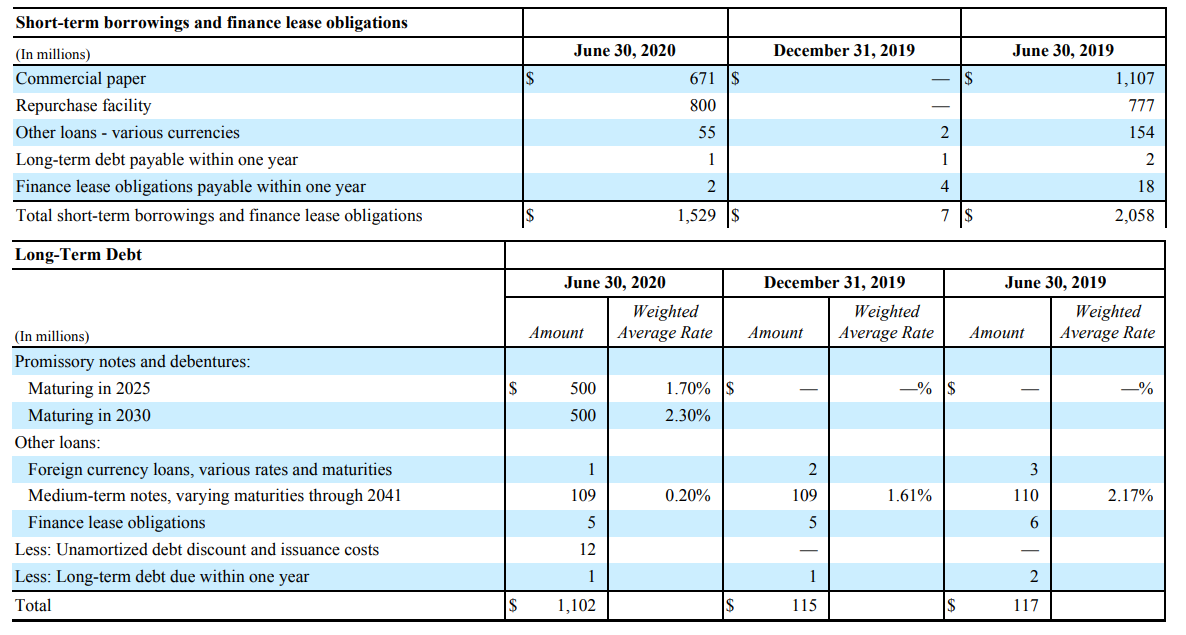 Corteva also has $2.8B in cash which means the company actually had a net cash position of a few hundred million, and this net cash position should increase again to in excess of $1.5B by the end of this year as receivables will be converted into cash.

That being said, we cannot just ignore the $6B pension deficit, and although I expect Corteva to report a net cash position of around $1.5B by the end of this year, if we would include the pension deficit as a financial debt, the net debt + pension liabilities would be around $4.5B, for about 2.25 times the EBITDA.

Corteva is a healthy company. It remains profitable and free cash flow positive, and although the current P/E ratio appears to be close to 25, it’s not outrageously expensive for a company with a net cash position of approximately $2/share. Yes, the pension deficit will have to be dealt with but the H1 free cash flow of $1.5B already includes a $202M payment into the pension fund, so Corteva is definitely working on reducing that deficit.

Including the pension deficit in the enterprise value calculation, Corteva currently is trading at just over 14 times its EBITDA (12 times excluding the pension deficit) which is not expensive considering the EBITDA was originally expected to grow by around 10% in the next few years. The average analyst expectations are aiming for an EBITDA of $2.5B in 2022, and if that will be correct, the EV/EBITDA ratio (including a pension deficit) will drop to 11 while the EV/EBITDA excluding said deficit will drop to less than 10.

The option premiums look pretty healthy as well and writing a P30 expiring in January would yield an option premium of $1.30. Should Corteva’s share price trade below $30 at the expiration date, an investor would be picking up stock at $28.70 for a forward EV/EBITDA of 10 (including the pension deficit). I currently have no position in Corteva but will be watching the option premiums with interest.

Investors’ appetite for risk exposure grew stronger this week. Despite Covid accelerating across key economies, vaccine headlines have underpinned bullish momentum. At the same time, lingering worries over a contested U.S. election appear to be […]