Stocks shrugged off early losses on Tuesday as the Nasdaq 100 pressed to new all-time highs while the S&P 500 and Dow Jones trailed closely behind despite a flurry of warning signs the coronavirus will impact the global economy. To that end, other risk-sensitive assets like the Australian Dollar and crude oil moved cautiously lower while gold pressed to its highest level since early January. Thus, the continued strength of the US equity market has become somewhat of a head-scratcher.

To be sure, the global economy is in a vulnerable position. Prior to the COVID-19 outbreak, global trade was slowing, and global economic activity was lukewarm. According to DHL’s global trade barometer, worldwide trade had already begun to slow in the middle of last year – in large part due to the US-China trade war. Now, the viral outbreak could look to further pressure shipping before it can enjoy a boost from the first phase of the US-China agreement. 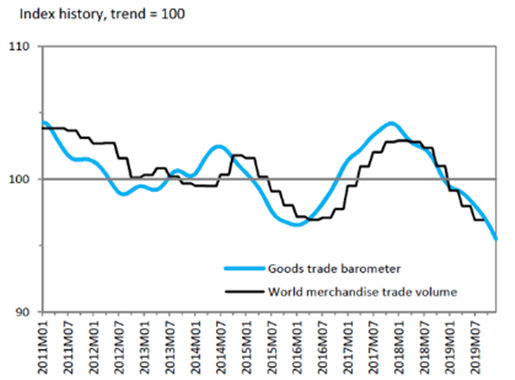 The pullback in exchanged goods is also reflected by data from the World Trade Organization which displays a material drawdown in merchandise trade volume. Consequently, export-sensitive corporations and economies could suffer. Further still, many developed countries were already on weak economic footing prior to the outbreak, namely Japan and Germany. 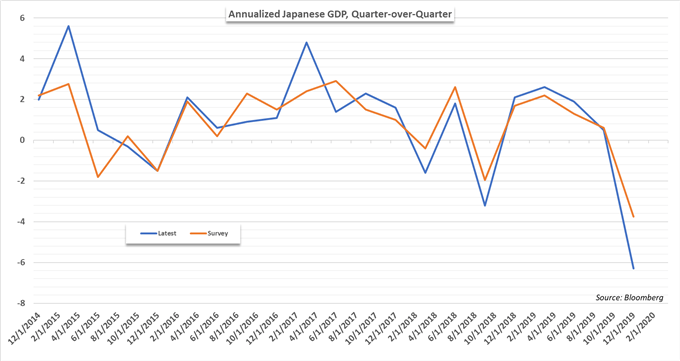 In the case of the former, data released on Monday revealed a -6.3% pullback in GDP quarter-over-quarter, largely due to heightened sales tax and prior to any impact from the virus. Looking to Germany, continued weakness in manufacturing data suggests a similarly worrisome picture. Nevertheless, the DAX finds itself narrowly beneath all-time highs while the Euro is in the midst of a prolonged decline as Eurodollar futures suggest ECB rate cuts may be in store.

With that in mind, it can be argued stock valuations are being kept afloat – at least in part – by their respective central banks, but I am hesitant to suggest the prospect of further monetary easing is solely to blame. As I outlined in my weekly forecast, it seems as though the market is content moving higher without the backing of fundamentals – a possible symptom of the late stages in a bull market.

While I am not suggesting the market is due for a crash, I think the Nasdaq has become somewhat detached from the underlying fundamentals at this point in time, making the risk-reward profile of long exposure unattractive.

That being said, it is important to keep in mind that “the market can stay irrational longer than you can stay solvent” and the presence of seemingly bearish fundamentals does not necessarily dictate a negative reaction in price. Regardless, it seems as though stocks are still tilted higher however bearish the fundamental backdrop may appear, which makes careful risk management more important.