(Image from Yum China’s Q4 Earnings Presentation shows the lesser-known brands within the company’s portfolio which contributed to operating losses in fiscal 2019.)

Despite a lot of noise from rising US and China trade tensions in the past couple of years, 2019 was a fairly uneventful year for Yum China (YUMC). It was business as usual as the company continued to aggressively expand its footprint in China by increasing its net restaurant unit count by 8.4%. While revenues and net income have benefited from greater scale, incremental gains have trailed physical expansion rates. Sluggish annual same-store sales growth of 3% also put into question whether Yum’s brands are losing their luster in China. The recent outbreak of the coronavirus in China will not only severely affect Yum China’s operating results in the first half of 2020 but may also limit a second half rebound even after the epidemic’s passing.

Since a portion of the company’s restaurants is not company-owned, consolidated revenue growth only grew 4.3% over fiscal 2018. Adjusted pre-tax net income growth continued to decelerate in 2019 and fell below the company’s unit expansion as the chart below shows.

Part of my bearish outlook for Yum China is due to the company’s diminishing returns on expansion. As the chart above shows, annual adjusted pre-tax net income growth lagged store count additions in 2019. The table below shows company-owned KFC only metrics which contributed to 90% of Yum China’s consolidated operating income. Negative percentages in the last column labeled ‘System Sales Impact’ indicate diminishing returns on restaurant expansion.

To be fair, part of Yum China’s lackluster dollar figure results was due to the RMB’s depreciation vs. the USD in 2019. Since RMB figures were not provided, there would be no accurate way to make constant currency comparisons. The only metric the company provides is a rounded system sales figure for each branded segment. Even using this rough constant currency figure, a clear deceleration in system sales benefit from restaurant expansion can be seen in the last column of the table below.

As I noted in a previous YUMC article, the company’s ‘excluding f/x’ notation carries less weight since more than half of its free cash flow was spent in USD to buy back stock and pay dividends. In addition, the recent increase in cash and cash equivalents is also a little deceiving considering the significant increase in current liabilities. The table below shows the gap between current assets and liabilities has actually declined in 2019 despite a rise in cash levels.

According to Yum China’s fourth quarter earnings conference call, over 30% of its stores in China have closed since the outbreak of the coronavirus outbreak about three weeks ago. In addition, system sales for stores remaining open have declined by 40-50%. With a large majority of the company’s revenues and operating income derived from company-owned stores, Yum China’s operating results will be severely impacted by this epidemic. As the table below shows, almost 90% of the company’s segment level gross profits are generated from company-owned locations.

It would be fair to assume occupancy costs should be fairly fixed while material costs (food and paper) should be variable relative to revenues. Under this assumption and further assuming about 25% of payroll is fixed, we can approximate to what degree company-owned store sales can decline before resulting in consolidated operating losses.

Thus, based on fiscal 2019 metrics with assumptions noted above, company-owned store sales cannot decline by more than 50% before resulting in consolidated operating losses. Since this figure assumes constant earnings contribution from franchise and unconsolidated affiliates, the actual maximum decline percentage maybe a couple of hundred basis points lower. In addition, a higher percentage of company-owned store’s operating expenses may be fixed. For example, the above case assumes 100% of material costs are floating, but, in reality, under lower sales volume, food costs may be higher due to its perishable nature. Restaurant level margins may also come under pressure due to a higher ratio of lower margin delivery sales and general material inflation due to supply chain disruptions.

Based on management’s comments, Yum China’s total sales have dropped by over two thirds since the outbreak of the coronavirus. At this lower traffic volume and assuming the fixed operating metrics described in the theoretical example above, Yum China could post quarterly operating losses as high as $500 million or over $1.00 in EPS losses. If these trends continue in the second quarter, the company would likely post an annual loss in 2020 even if second half business activity returns to normal.

If we use the 2003 SARS outbreak as a historical reference, business activity may not return to near normal levels until the second half of 2020. In the case of SARS, travel restrictions were not lifted until July when warmer temperatures lowered contagion risk. Thus, while the threat of increased business closure should diminish in the second quarter, business activity may still be far below normal levels. Until travel restrictions are lifted entirely, business may be impacted by the reduction in tourism which, in turn, could impact the local economy.

Secondly, the productivity lost will not be recoverable. The quarantining of 50 million people around Wuhan will effectively shut down a meaningful portion of China’s economy. The delayed resumption of business after the Lunar holiday will also result in lost income for both citizens and corporations alike even in areas outside the immediate affected region. In short, the efforts to contain the epidemic will effectively paralyze China’s economy. As a result, several Wall Street analysts have already lowered China’s first quarter and full year GDP forecast by around 20% and 10% respectively.

It is very likely second half business trends will unlikely return to normal levels seen just before the coronavirus outbreak. With a much higher level of company-owned footprint in China now than ever, Yum China is even more leveraged to sales volume. Operating income will thus be disproportionately impacted by any decline in revenues such that even minor single digit declines in the second half of 2020 could result in double-digit earnings declines from levels posted in 2019.

As the weekly chart for YUMC shows, the stock recently broke a year-long uptrend by closing below a key moving average for two weeks in a row. Even prior to the coronavirus induced selloff, the bearish MACD divergence marked last month showed weakening momentum and foreshadowed a potential selloff. 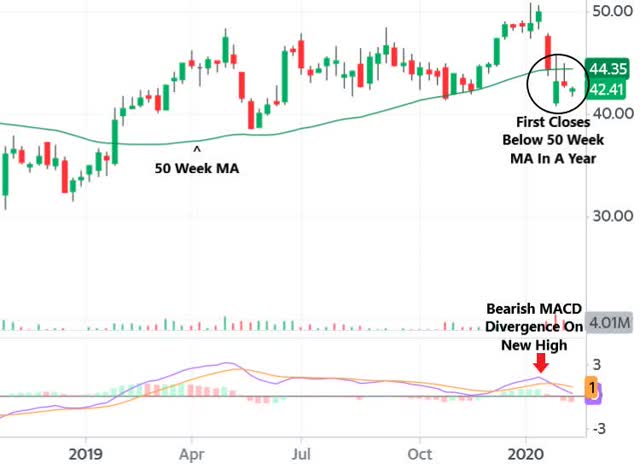 With the US market indexes in a complete liquidity-driven melt-up, many stocks are being buoyed despite having high risk exposure to the recent coronavirus outbreak. Yum China is one such name with 100% exposure in China and, as a result, could post corporate losses on revenue declines exceeding 50%. If the current coronavirus duration parallels SARS seventeen years ago, Yum China’s results in the first half of 2020 could fall into the red.

As with past epidemics, this one will pass but its short-term economic damage could linger because a lot of the demand destruction will not be recoverable. The estimated increased rate of GDP deceleration in China could result in second half earnings below 2019 levels. Thus, current Wall Street lowered expectations which call for 2020 non-GAAP EPS of $0.88 on a revenue drop of 9.1% appear to only factor in about a quarter of negative impact from the coronavirus outbreak. If store closures or business traffic remain impacted in the second quarter, there still could be downside to current annual estimates.

Analysts do expect revenues and earnings to rebound significantly in 2021. At the current 2021 non-GAAP EPS estimate of $2.02, YUMC is trading at about 21x next year’s earnings. As detailed above using results from fiscal 2019 prior to the coronavirus outbreak, the company was not able to grow adjusted pre-tax net income beyond single digits despite aggressive physical expansion. With the recent stock price near $43, investors are paying a price to earnings growth multiple well above 2 which historically is considered over-valued.

One of my main bearish arguments against Yum China is the long-term risk of China’s economy decoupling from the US. In my opinion, China’s strategic initiatives in the past few years caused a US over-reaction resulting in the recent trade war. From China’s perspective, this in turn only cemented the need to be not only economically but technically independent from the US. Although backlash has not had any apparent negative impact on Yum China’s business so far, the long-term risks remain should tensions further escalate in the future. While the company’s aggressive expansion may boost earnings growth in the short term, it also increases long-term liabilities should Chinese consumer sentiment shift against US brands. For this reason, Yum China should not warrant any valuation premium relative to its growth rate or peers without China risk exposure.

Disclosure: I am/we are short YUMC. I wrote this article myself, and it expresses my own opinions. I am not receiving compensation for it (other than from Seeking Alpha). I have no business relationship with any company whose stock is mentioned in this article.

Wheels Up is a strong player in the private aviation space. gremlin Flying can be akin to roulette these days. Flight cancellations due to coronavirus restrictions, pilot shortages, and weather delays are widespread. Thousands of […]

Diego Thomazini By Robert Hughes AIER Summary AIER’s Leading Indicators Index fell thirteen points to a reading of 29, the lowest level since August 2020. The latest reading is well below the neutral 50 threshold […]