Core Laboratories (CLB) reports earnings October 21st. Analysts expect revenue of $112.73 million and EPS of $01.5. The revenue estimate implies a Y/Y decline of over 50%. Investors should focus on the following key items.

COVID-19 has caused businesses to shut down, consumer spending to decline, and Q2 GDP to fall over 30%; the economy could remain in recession territory until the pandemic subsides. Cyclical names like Core Labs have been particularly hurt. Sizeable exposure to North America land drilling, once a competitive advantage, has not been able to insulate Core Labs from volatile oil markets. In Q2, the company reported revenue of $116 million, down 24% sequentially. 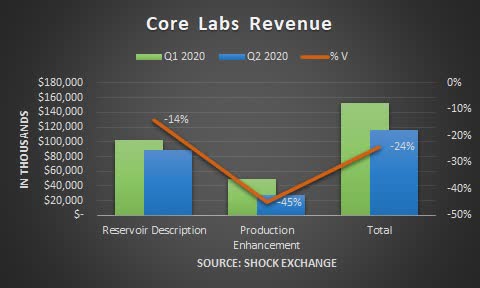 Revenue from Product Enhancement was $27 million, down 45% Q/Q. The segment is involved in the completion of wells in the U.S. and globally. Drilling and well completion activity declined due to the demand destruction caused by COVID-19. The North American rig count also fell 60% Y/Y in Q2. For the week ending October 9th, the rig count rose slightly week over week, yet completion activity could face headwinds at current oil prices.

Reservoir Description serves the market for deepwater drilling. Delayed investment in international and offshore projects caused revenue from the segment to fall in the double-digit percentage range. At current oil prices, deepwater projects are likely not economical. I expect orders for the segment and future revenue to remain flat-to-declining. E&P for the sector may show signs of life until oil rises into the $70 range for a protracted period.

Core Laboratories Has Been Cutting Costs

Oil services firms have been cutting costs amid demand destruction for oil. After the economy reopens, there is no guarantee that oil prices will grow over the long term. It is prudent for Core Labs to rightsize its cost structure to give it the flexibility to operate effectively in a low oil price environment. Last quarter, the company tried to better align its cost structure with client activity:

The company very quickly undertook major steps to align its cost structure with client activity levels. Compared to 2019, structural costs have been reduced by $61 million on an annualized basis, and most of these reductions have already been implemented. All of the announced cost control measures will be completed by the end of the third quarter.

While this is a challenging task in this uniquely volatile market, Core’s management team remains sharply focused on rightsizing its cost structure while still maintaining workplace safety for our employees. Moreover, we will meet all of our client project needs and, very importantly, remain positioned for the recovery in client activity.

The decline in scale still weighed. Gross margin was 22%, down about 200 basis points versus Q1. Gross profit was $25 million, down over 30% Q/Q. Management reduced general and administrative costs by over 50% Q/Q to $9 million. As a percentage of revenue, general and administrative costs were 8%, a 500-basis-point improvement versus Q1. Management will likely make deeper cuts to this expense bucket in Q3.

The fallout was that EBITDA fell 11% Q/Q to $16 million. The EBITDA margin actually improved 200 basis points to 14%, which was commendable given the company’s size. Core Labs is much smaller than Baker Hughes (BKR), yet its EBITDA margin is about 500 basis points higher. A leaner cost structure could improve margins further, yet EBITDA could still decline due to rapid declines in revenue. I anticipate more declines in EBITDA until the economy fully reopens.

Oil services firms must maintain liquidity to help sustain themselves amid a downturn in oil markets and uncertain economy. This is even more important for smaller firms like Core Labs. The company has $21 million in cash and $92 million in working capital. It also generated free cash flow (“FCF”) of $43 million through the first six months of 2020. This was up from $30 million in the year-earlier period. As the business retrenches, Core Labs should be able to monetize working capital to drive FCF higher. If FCF remains positive, then liquidity should also grow. Core Labs appears to have enough liquidity to sustain itself for several more quarters.

In the past, I have been skeptical of the stock’s robust trading value. CLB currently has an enterprise value of $934 million and trades at about 14x run rate EBITDA (first-half EBITDA annualized). The stock trades higher than its peers and appears to be fully valued at this point.

CLB has doubled off its 52-week low set in March after the pandemic materialized. The upside from the spike in oil prices since then appears to be priced in. I rate the stock a Hold.