CompuGroup (OTCPK:CMPVF, ETR:COP) has released its preliminary Q4 financial figures on February 5. The results were much stronger than expected with 3 out of 4 segments hitting the upper-end of the guidance. The newly published 2020 guidance was roughly in line with our and market expectations; however, the growth range is rather wide reflecting uncertainty surrounding the implementation of further applications.

The biggest surprise came, however, from the announced acquisition of Cerner’s (NASDAQ: CERN) hospital information system portfolio in Germany and Spain which aims to offset the failed acquisition of Agfa’s hospital division. The acquisition is set to be closed in Q3 ’20 and is not included in the group’s guidance. Once closed, the guidance will be upgraded according to the management.

Following the results and the announced acquisition, the stock climbed +16% while subsequently settling at +11.6% – the biggest upsurge in its recent history. We believe the stock will remain quite volatile throughout the year, given high uncertainty in further telematics spread, integration of the announced M&A, as well as possible further acquisitions, presenting a better buying opportunity compared to the current multiples (2020 PE of 36.5x and EV/EBITDA of 16x). CompuGroup is a quality stock with a sustainable business model and a high share of recurring revenues and attractive profitability profile; however, regulatory uncertainties make it rather volatile.

In addition, it announced changes in the legal form from Societas Europaea (SE) to KGaA (partnership limited by shares) in order to realize “greatest possible (financial) flexibility”. In essence, that means CompuGroup can do capital increases without the consent of its shareholders, effectively diluting their stake (i.e., power in the family’s hands) and ultimately excluding any takeover going forward. We remind Gotthard family (founder) is the major stakeholder of CompuGroup with c. 40% share.

In contrast to our expectations, CompuGroup recorded much stronger Q4 results, with sales picking up by +5.8% and hitting the upper-end of the full-year guided range (0.4%-4.6%) and way ahead of the expected decline of -4.1%. Such outperformance was largely explained by much stronger growth dynamics across all segments as well as higher M&A contribution as originally assumed.

As mentioned above, 2020 guidance includes a high degree of uncertainty surrounding further telematics implementation and no announced M&A. To summarize, CompuGroup expects topline growth range of 2.6% to 9.3% with a mid-point at 6%. Upon closure of the above mentioned M&A, the guidance will be revised to include partial sales contribution of Cerner’s hospital business of roughly €19m for Q4.

Following new guidance, we also revised our estimates and adopted a more cautious view regarding those adjacent telematics sales. We expect to see sales growth of 7.6% or 5.6% organically which places us at roughly mid-point of the guidance. However, if we entirely exclude adjacent sales (only partially included in the estimates), growth slides to 1% – demonstrating how sensitive topline from those incremental revenues is.

The management highlighted, that H1 ’20 wrestles with strong comparables and front-loaded R&D investments.

The Ambulatory Information Systems (“AIS”) segment contributes c. 62% to the total revenue, with CompuGroup occupying #1 position in its key European markets with at least 40% market share. In this segment, the company develops primary (ERP similar) software for general practitioners and dentists. The customers are usually very sticky, with a very low churn rate of c. 2-3%. Sales mainly consist of c. 75% recurring revenues, with the rest being licenses (c.20%) as well as some training, consulting and, to a lesser extent, hardware.

In Q4, the sales drop wasn’t as pronounced as expected at -0.5% vs. -10.7% (expected) and competing with 28.4% growth last year. The gap is largely explained by a higher share of recurring revenues and two acquisitions (GIS and Qualizrg), which helped to offset missing telematics revenue. Adjusting for M&A impact, organic growth stood at -9% reflecting much lower telematics sales – Q4 had no hardware sales as CompuGroup didn’t manage to connect any doctors, whereas last year (Q4) 8k doctors (“GP”) were connected with total estimated revenue of €40m. Adjusting for those missing sales, underlying/organic growth stood at 4% and roughly at the historical level. We note that in the conference call, the management highlighted that Q4 sales also benefited from Windows 10 migration, which led to higher hardware sales (we didn’t have those in our estimates) with the total impact undisclosed and strong US performance – good news since the US was always weak.

For the full year 2019, AIS sales growth was flattish vs. -2.7% expected drop and at a mid-point of the guidance. Organically, sales declined by -7%, largely explained by missing hardware revenue from telematics, adjusting for those sales went up by 5%.

In its new 2020 guidance, CompuGroup expects growth to range 2% to 9% or 5.5% mid-point, reflecting high uncertainty surrounding additional hardware upgrade, which should be implemented by the end of the year. We adjust our original estimate and expect only half of those sales coming this year or €15m. Coupled with Epsilog acquisition, and 2% organic growth, we arrive at 3.6% topline growth for 2020. Once again, if they manage to upgrade more doctors this year, sales can go up to 7.4%.

As expected, CompuGroup didn’t connect any additional doctors to the telematics infrastructure in Q4 and confirming 54k (“GPs”) – total installed base or 83% of its customers. We want to highlight that out of those 54k doctors, 12k were not its existing clients, implying only 65% coverage, which is very disappointing, in our view. 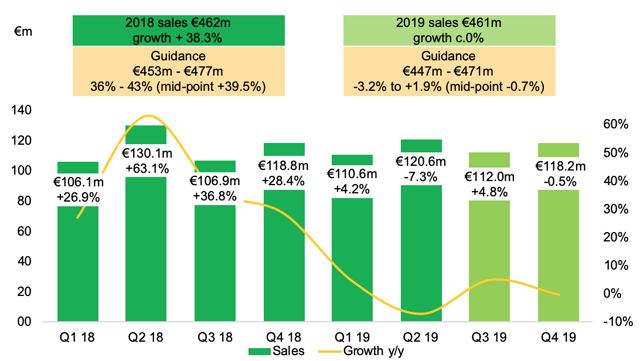 Pharmacy Information Systems (“PCS”) segment is the second-largest segment which accounts for roughly 16% of total sales. In this segment, CompuGroup occupies the leading market position in Italy with around 40% market share (acquired through M&A), as well as #4 in the German pharmacy market with c. 20% share. As a reminder, pharmacy is the second group (after general doctors) required to install TI connections starting in 2020.

Contrary to our expectations, Q4 was much stronger with topline remaining on the same growth trajectory at 6% with organic growth at 5%. Similar to AIS segment, the pharmacy has also benefited from Windows 10 migration which resulted in hardware sales and driving topline growth as well as some additional incentives in Italy, which were expected to fade this year.

Overall, in 2019, sales grew by 6% or 5% organically and ahead of the guided range of 1.8% to 3.5% on the back of 1) growing demand in its core markets in Italy and Germany, 2) Italian tax incentives, as well as 3) one-off Windows upgrade boosting hardware sales. For 2020, CompuGroup guides for a 3.9% to 12.2% growth range with the mid-point at 8%. The major uncertainty is the telematics roll out in the pharmacy as it’s still unclear whether all the necessary requirements will be fulfilled for a broadband roll out this year. According to management, the 2020 guidance includes “low double-digit €m impact from the rollout”. We mirror this statement in our estimates and expect that only half of the pharmacies or 4,000 would be connected to telematics this year. Assuming organic growth of 2% (long-term average and assuming no other one-offs), we see PCS sales growth at 11%. In case all 8,000 pharmacies will be connected this year, topline growth can go up to 21%, which we reckon is highly unlikely. 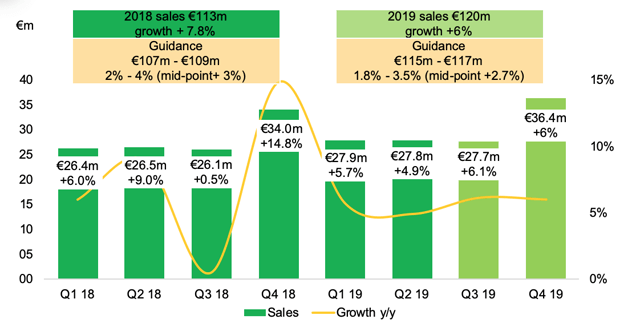 Hospital Information Systems continued to benefit from a strong pipeline

Hospital Information Systems (“HIS”), with c. 16% revenue contribution, is the most underrepresented segment in the group’s portfolio. The company develops laboratory and clinical software (mainly admin and financial) for hospitals in the DACH regions. Given the project-based revenue structure with c. 50% in recurring revenue, it can fluctuate more intensely than other segments of CompuGroup.

Q4 showed strong growth at 21%, considerably exceeding the upper end of the full-year guidance of 12% to 14% as well as our 11.6% estimate. In the conference call, the management talked about one-off hardware sales to the NÖKIS project – the Austrian hospital chain. In the original press release, the company stated the total contract volume of €100m over 10 years, implying around €10m per year. However, CompuGroup failed to communicate that part of the contract are hardware sales occurring in the first year.

Overall, 2019 is the strongest year for the hospital division with sales growth of 14.8% and ahead of the full-year guidance. In 2020, the company expects topline growth range of 4.5% to 8.9% and mid-point at 6.7% as one-off hardware sales fade. We remain positive for the segment and expect a 7% growth as CompuGroup works through its strong pipeline, which mainly includes the NÖKIS project, with an estimated €7m to €10m annual sales.

We highlight, CompuGroup announced the acquisition of Cerner’s German and Spanish businesses, which should be closed in Q3 ’20 and bring around €19m in incremental revenue this year. According to the company, once the transaction is finalized, the guidance would be revised. We discuss the rationale and our view of this acquisition in a separate article. 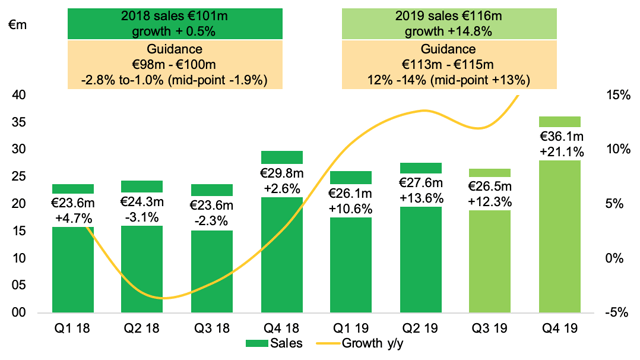 Health Connectivity Services (“HCS”), which is the smallest in the group (c. 6% revenue share), is less sophisticated in terms of product offerings (information interface for pharma, labs, etc.). In the past, CompuGroup considered this segment as a pet project with no particular strategy. However, now, with the new management on board (Dr. Eckart Pech), it will slowly become the core to the group strategy with a particular focus on consumer health software, such as CGM Life – an online platform for appointments, prescriptions, etc. – and MGS – an online platform for private insurance.

Q4 continued its high double-digit growth path, resulting in the full-year topline growth of 19.3% and exceeding the guided range of 12.5% to 17.5%. According to management, the growth was driven by multiple projects with pharma and insurance companies. For 2020, CompuGroup expects its growth to significantly subside to 0% to 5% and mid-point at 2.5% providing very little insight as to why that is. Amid limited information, we adjust our estimates to reflect mid-point of the guidance; however, this might substantially change as this segment lacks any visibility (at least for now). 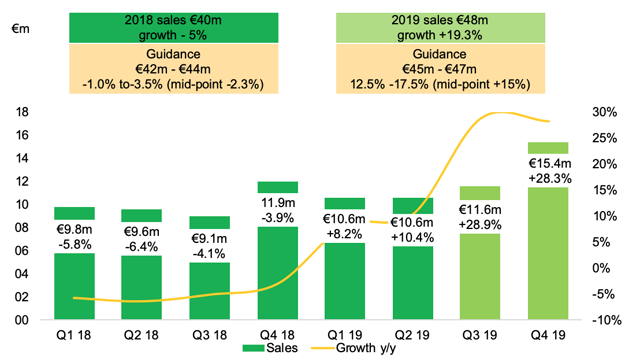 We note that the reported EBITDA includes IFRS 16 positive impact of €17.3m per year, which CompuGroup comfortably includes in its adjusted margin calculations.

For 2020, the management guides on an adjusted basis (excl. one-offs) with margin ranging between 25.4% and 26.4% and mid-point of 25.9% and implying a decline of 70bps, which we also adopt. We emphasize the announced acquisition will result in transaction and integration costs, burdening the IFRS margin. We reckon, for this very reason, CompuGroup guides for the first time on an adjusted basis. 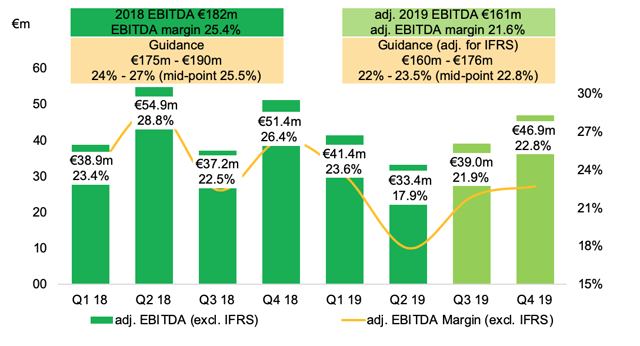