After failed large M&A (please refer to “CompuGroup: There Are No Second Chances“), CompuGroup (OTCPK:CMPVF, ETR: COP) announced the acquisition of part of Cerner’s (NASDAQ:CERN) hospital information system portfolio in Germany and Spain. CompuGroup agreed to pay a total of €225 million, which, according to the press release, can be further adjusted upon closing, which is expected in Q3 ’20. In 2019, the combined revenue stood at €74 million and €13 million in EBITDA, translating into of 17.6% margin – well ahead of CompuGroup’s hospital division, which had a 12.6% margin. The acquisition was rather unexpected, as CompuGroup lost the battle to Dedalus Holding late last year, who took over (much larger) Agfa’s hospital division.

The announcement came on the same day as preliminary figures, which beat the market and our expectations. The stock rocketed +16% on that day, which we believe was largely due to unexpected M&A providing the needed scale to the underrepresented hospital division.

Acquisition of #2 in the German hospital market

According to the press release, Cerner sold two hospital divisions in the German and Spanish markets as part of its more focused growth strategy. The expected closure of the transaction is expected in Q3 ’20 and is pending regulatory approval, which we don’t see being an issue. In essence, CompuGroup buys medico(R) and Soarian(R) Integrated Care (S-IC) – #2 providers of hospital information systems (“HIS”) in Germany with 250 hospitals, or 13% market share. The Spanish product includes Selene(R) and, according to the PR, a leading “HIS” for public hospitals in Spain with 26 hospitals and an estimated 4% market share, as well as Soarian Health Archive(R) – document archiving solution for healthcare providers.

The most interesting regional segment is the German market, which, combined with CompuGroup’s current market share of around 7.5%, brings the total market share of two businesses to 20% – making it the second-largest after Agfa’s hospital division.

We note, Cerner acquired the hospital information system business back in 2014 for $1.3 billion from Siemens (OTCPK:SIEGY), which at that time included 40 global markets.

Getting to that needed scale – top line synergies ahead

The acquired businesses are expected to generate around €74 million in sales in 2019, with the bulk, or 74% (€63 million), being in the German hospital market (“HIS”). Over the last three years, the revenue growth was at 5% (CAGR 17-19) and slightly below the HIS division of CompuGroup of 6.5%, although the growth dynamics accelerated only in 2019 with the win of the NÖKIS project (sourcing Austrian hospital chain). Once the business is fully consolidated, it will account for roughly 25% of the total sales versus 18% in 2019.

In the conference call, management only slightly touched on the acquisition, stating they expect only top line synergies once the business is integrated, and provided no information as to the share of recurring revenue and future growth trajectory. However, they hinted that upon closure more details will be shared with the market.

To get a feeling for the overall size (following integration) and the impact of this acquisition, we show two scenarios:

We note, CompuGroup has changed its segment reporting, now including non-US lab business in the hospital division with c. €19 million sales contribution (previously part of ambulatory products (“AIS”) with US lab business is still being a part of it), and providing no information as to the rationale. We reckon the management’s goal is to show (artificially) higher revenues/scale for this segment. 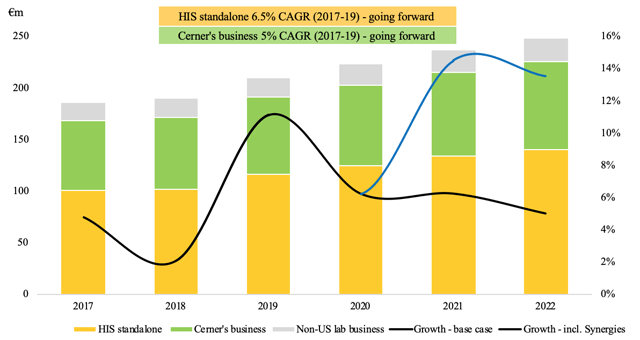 (Source: Image created by author with data from CompuGroup)

The acquisition is margin-accretive from the start

The acquired businesses have a much attractive margin profile than the group’s HIS division, with an EBITDA margin of 17.5% compared to 12.6% (underlying HIS margin), or 14.2% according to the new segmentation. Therefore, we expect to see an immediate margin boost of c. 110bps to 15.3% based on 2019 pro forma figures. Company management doesn’t expect to see any major cost synergies, only sales synergies (as mentioned above) are expected. This is the major difference from the failed acquisition of Agfa’s business, which had a much better margin profile of 20-25% and sizable cost synergies. At the group level, the margin improvement is rather limited of around 50bps given the segment’s albeit rising, still small, overall share of 25%. 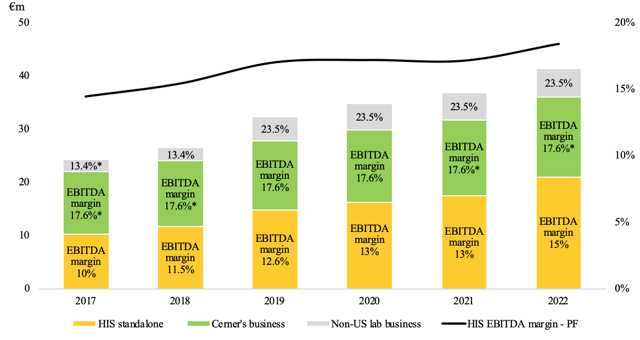 (Source: Image created by author with data from CompuGroup)

Utilizing provided information, we calculate CompuGroup paid around 3x sales (based on 2019 figures) – roughly on the same level as its own 4.3x multiple – and 17x EBITDA (assuming a flat margin of 17.6% in 2019) – slightly higher than its own 16x. These valuation levels are comparable to the foregone large acquisition of Agfa’s Healthcare unit, which we believe would be way more beneficial than Cerner’s businesses. As a reminder, Agfa’s Healthcare unit was valued at 3.75x sales and c.17x in EBITDA. This indicates that the actual reason why CompuGroup didn’t pursue Agfa is the actual (absolute) size of the business, and not valuation. We reckon company management was against putting a lot of debt on the balance sheet, which would be the ultimate result of this acquisition.

CompuGroup didn’t provide any insight into the financing of the acquisition. However, we believe it will be done using debt financing, as current cash reserves are low at €47 million as of December 31, 2019. We highlight CompuGroup has also sizable treasury shares representing c. 9% of the total equity, with a total value (stock price €64.55) of c. €286 million which it can potentially use for acquisition. However, we believe it’s rather unlikely this time, as the bulk of treasury shares was acquired in Q3-Q4 ’19.

Using debt financing, CompuGroup will increase its current leverage (debt/EBITDA) only slightly to 3.7x on a pro forma basis from the current 2.75x, which is reasonable for its business model with a high share of recurring revenues of 62%. 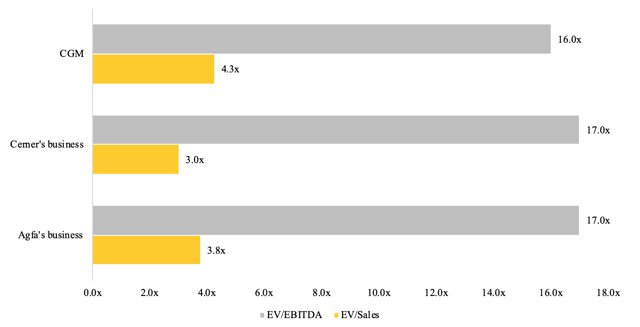 (Source: Image created by author with data from CompuGroup and MarketScreener.com)

CompuGroup found a not-so-bad substitute for the failed large-scale acquisition, making it the #2 in the German HIS market. Sales synergies (through cross and up-selling) should be moderate, with more information to follow in Q3 – after closure and immediate margin boost. Management doesn’t expect any cost synergies, the major differentiator in Agfa’s deal, which could significantly boost the combined margins. Overall, it appears to be a second-best acquisition in this segment at reasonable valuation levels following the market leader Agfa.