The ultimate global economic hit from this year’s outbreak of Wuhan-strain coronavirus is unknowable, but whatever it turns out to be it will come at a time when the world economy is manifestly ill-equipped to cope.

As the old year faded out, 2020 seemed to offer promise for growth-linked, assets such as commodity currencies, commodities themselves and stock markets. However, that promise seems to have faded appreciably even before January is through, with haven assets such as the Swiss Franc and gold ruling instead.

The system of global trade remains under political pressure of an order not seen before in the modern era. The US and China may have signed a ‘phase one’ trade deal, but it’s really no more than a tariff-war truce. The real meat will have to be in a subsequent settlement and, although the two sides are still talking, that’s not coming anytime soon. Trade freedom is threatened elsewhere too, with the US eyeing both Japan and Europe as trade surplus sinners.

The Brexit story which has troubled markets since 2016’s British vote to leave may have finally moved on but the shape of the final trade and political arrangement between the United Kingdom and the European Union is unknown. ‘No deal’ is not likely but remains possible. Whatever happens, torturous brinkmanship surely lies ahead with the specter of unintended consequence hovering above.

Then there’s China itself. Growth there is already near thirty-year lows and the fact that this was not in any way unexpected does not lessen its importance. Plenty of China watchers including those at Dutch bank ING think that the coronavirus hit will contribute to a deceleration of growth to below 6% this year. Given China’s astonishing debt levels it’s not difficult to see problems ahead, especially if the effects of the virus worsen.

What About The Central Banks?

The global monetary system is arguably where the minefield gets really tricky to cross. Interest rates are at or close to record lows all over the developed world. The Federal Reserve has managed to raise its own lending rates substantially from their financial-crisis lows but, even in the US, monetary policy remains very loose by historical standards. Central bankers have less ammunition to fight any coming downturn than they’ve ever had before and their Davos commentary this year suggests they know it.

And don’t forget that we are already quite late in the cycle, with stock markets’ bull run the longest bear-free charge ever seen.

The outbreak of Severe Acute Respiratory Syndrome (SARS) in 2002/3 provides a very imperfect guide to potential coronavirus costs but is still worth looking at. A 2004 study suggested that SARS cost the global economy $40 billion. So far coronavirus appears to be comparably contagious but notably less lethal. A similarly sized-hit need not be catastrophic for the global economy, of course, and that may be one crumb of comfort.

It has already been detected in the US, France, Australia, Singapore, Malaysia, Canada, Japan, Vietnam, Nepal and South Korea. This count will grow so the potential for economic damage and lost revenue will go well beyond China’s borders.

The Australian Dollar can serve as an exemplar of the problems already sown in the market by coronavirus worries. The clearly growth-correlated currency’s home country is China’ biggest supplier of raw materials so it stands especially exposed to any virus-linked slowdown. 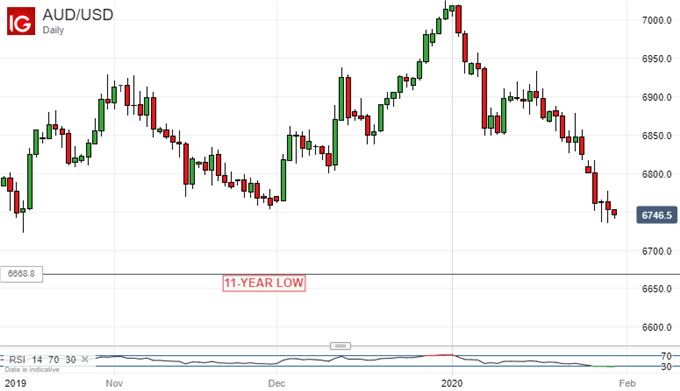 AUD/USD has been sliding effectively since the start of the year and is now approaching the eleven-year lows plumbed in 2019. Until there are signs that coronavirus has been contained, especially in China, support for it and assets with similar risk profiles will remain fragile.