Columbia Sportswear Co. (NYSE:COLM) with a market cap of $6 billion is recognized as a leader in outdoor and active-lifestyle apparel and footwear. The company just released its latest quarterly results, highlighted by a more challenging environment in Q4 with decelerating growth compared to the first half of last year. The stock is down nearly 20% from its highs in 2019 given the more muted outlook. Management guidance for 2020 targeting flat EPS growth along with comments suggesting ongoing headwinds in the Asia-Pacific region is likely to pressure sentiment over the near term. This article takes a look at recent developments and our view on where the stock is headed next.

Columbia Sportswear reported fiscal 2019 Q4 earnings on February 6th with GAAP EPS of $1.67 which beat expectations by $0.03. Revenue in the quarter at $954.9 million was up by 4.1% year over year and slightly ahead of estimates.

Even with the earnings beat, the story here was a more challenging operating environment in Q4, particularly for outerwear compared to a stronger rest of 2019. Quarterly revenue growth of 4.1% was the weakest for any quarter since Q4 2017. In Q4, the gross margin fell to 50.1% from 51.7% in Q4 2018 which pressured the operating margin down to 14.5% compared to 16.6% in the period last year. The context here is broader pressures from retail and trends in apparel wholesale. From the conference call:

In the fourth quarter, we experienced the challenging retail environment, particularly in outerwear, which resulted in higher levels of promotional activity in our DTC business and higher close up sales in our wholesale business as we took actions to reduce inventory levels.

In Q4 across geographies, the U.S. market with reported sales of $634 million and 66% of the total was the growth driver, with revenues up 8% compared to Q4 2018. A 4% y/y decline from the Latin America and Asia-Pacific (LAAP) region, along with a 10% decline in Canada, was disappointing as management noted some inventory adjustments.

2019 EPS of $4.83, up 27% compared to $3.81 in 2018, helps to paint a more positive picture; but notably, most of this upside was a result of stronger Q1 and Q2 results. The combination of 9% sales growth for the year, a higher gross margin 49.8% compared to 49.5% in 2018, and a 20-basis point decline in SG&A as a percentage of revenue supported higher earnings. In this regard, the Q4 results were weaker compared to operating and financial trends in the first nine months.

The SOREL brand which can be categorized as more fashion-oriented and tilting towards a younger demographic presented an impressive 21% sales growth in 2019, but still represents a relatively small 11% of the overall business. Importantly, SOREL is mostly a footwear brand and its performance has boosted the segment category. Sales for the Apparel, Accessories and Equipment category grew 7% in 2019. Management highlighted SOREL during the conference call:

SOREL is expected to remain our fastest growing brand as it successful evolution to a year round function first footwear brand continues. For prAna and Mountain Hardwear, we will be building on the foundational work we began in 2019 with an eye towards unlocking growth potential in the years ahead.

On the other hand, the smaller prAna brand which represents 5% of net sales posted a 4% decline in overall revenues for the year as a weak point in the Columbia portfolio. In Q4, prAna sales fell 10% year over year while SOREL saw a 13% increase.

Management expects net sales growth between 4.5% and 6% for the full year ahead. This is a deceleration compared to the 9% growth observed in 2019. EPS between $4.75 and $4.90 at the midpoint is about flat compared to GAAP EPS of $4.83 in 2019. According to the guidance, a 20bps to 40bps decline in the operating margin is expected to offset a smaller expansion in the gross margin and SG&A deleveraging. During the conference call, it was mentioned that following strong expansion in the operating margin in recent years, the company thinks further gains in this measure will be more difficult going forward. 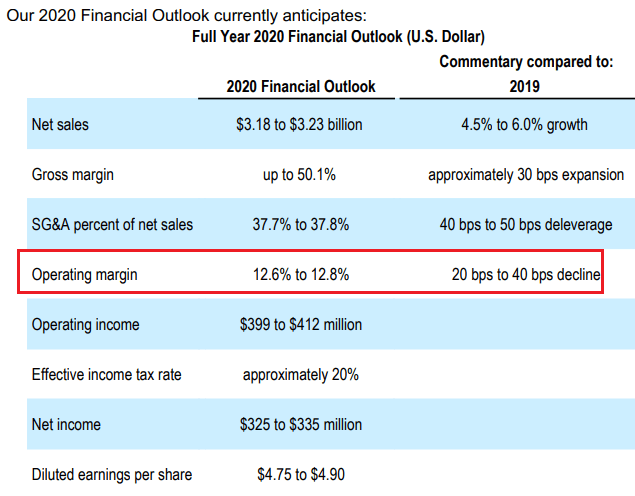 In terms of consensus expectations, the market estimates for 2020 EPS at $4.82 and revenue growth of 5.5% are within the management guidance range. Looking ahead, estimates suggest a rebound of earnings towards 10% growth in the mid-single-digits over the next two years.

The biggest question mark for 2020 and near-term concern is the extent of the coronavirus outbreak which management already sees representing headwinds for Q1 this year. Comments made in the conference call suggest the company is seeing the impact beyond China with lower store traffic and tourism across the Asia-Pacific region.

In recent weeks, the coronavirus outbreak in China has gripped the global community. Our first priority has been to take appropriate measures to ensure the health and safety of our employees and partners in the region. As work continues to contain the spread of the virus, it’s having an immediate impact on our business in China, including the effects of store closures and lower store traffic at stores that remain open. We’re also seeing an impact in regions and stores outside of China, due to lower tourism related to the outbreak. This has resulted in a challenging start to the year which will likely persist until normality returns to the region.

Recognizing some of the near-term weakness in the Asia-Pacific region, what we like about Columbia is its ongoing growth momentum in the U.S. market which still represents the bulk of its business. Sales growth in the U.S. at 12% year over year in 2019 to us suggests the brand is connecting with consumers and Columbia is still very much relevant in its core segments. This is in the context of intense competition, particularly among emerging outerwear brands like Canada Goose (GOOS) and even Lululemon (LULU) which has pushed into the category. Within the broader sportswear category, we think COLM holds an important position as a middle-tier quality brand that offers more affordable selections compared to luxury higher-priced alternatives.

Keep in mind there are key differences between these companies that are focusing on various segments and presenting different levels of growth. Our point here is to say that Columbia Sportswear could be considered the value pick in the group. For COLM, we see the ~$85 stock price as representing an important support level. A break below could signal a deeper deterioration in the outlook.

Weaker trends in Q4, including a more challenging operating environment in the Asia-Pacific region, have dampened some of the enthusiasm in COLM stock. We rate shares of COLM as a hold, balancing our favorable view of the company and relative valuation against the more challenging near-term outlook. An exceptionally strong first half of last year sets up more difficult comps in the upcoming quarters that the company will be challenged to exceed. Beyond the risk of a global cyclical slowdown, monitoring points for COLM include the evolution of its operating margin and growth momentum in the smaller brands SOREL and prAna.

Mario Tama Article Thesis Activision Blizzard (NASDAQ:ATVI) continues to see its shares rise and fall depending on news related to the pending takeover by Microsoft (MSFT). Meanwhile, the company’s underlying performance has been compelling, and […]