One of the very few central pillars supporting the hopes for a second-half rebound was China’s “stimulus.” Since we’ve been conditioned to just accept whatever a central bank does as equal to it, throughout the last thirteen months since the first RRR cut was initiated, that one as well as the four which followed (five for smaller and medium banks) have been described this way. The US President has even tweeted along these lines.

But with data in hand for the first five months of 2019 already, hopes are again dimmed by a very different reality. Powerful stimulus isn’t showing up. People are starting to notice.

China’s growth is in danger of slowing further after weakening in April and May, with monetary policy makers having fallen behind in applying stimulus, according to Deutsche Bank AG, which advises buying the nation’s bonids.

From (global) bond bears to bulls without ever factoring why they went from one to the other (or why they were the one instead of the other in the first place). Once you see how the RRR cuts were never “stimulus,” China’s economy and even the PBOC’s motivations within it start to make sense. They just don’t add up to the Western accounts of either.

It all begins, or ends, depending upon your perspective, with what’s now almost certainly an expensive and still-ticking clock. When CNY falls, that’s bad for China and the rest of the world, not because the world or China depends upon a steady or “stronger” yuan, but because of what it says about the eurodollar system driving everything into global recession.

China’s central bank has enormous, if misunderstood, incentives for intervention. The real question for those interested in both clocks and plumbing is how and where. The Chinese, as is their prerogative, don’t report. Even on their IMF templates, Section IV is mostly blank.

Still, we have a reasonably good idea of Big Mama’s huge muddy footprints. They show up right at the end of last October, and then again at the end of November; in December, the world went nuts, chaotic markets everywhere, but CNY somehow quite curiously staged a furious rebound. Either CNY DOWN = BAD was invalidated, or the PBOC wanted you (if you are an “evil” speculator) to think it was.

Sure enough, exactly three months after CNY’s first trajectory correction, it changed course a second time. It didn’t reverse, but it no longer was “strong.” Instead, exactly three months after that, at the end of April, the exchange rate finally plummeted. Two ticking clocks and the rest of the world dragged into the liquidity mess (starting right around, say, April 17).

Midway through May, the yuan defies gravity again. Since around May 17, the currency “devaluation” has paused at about 6.91. From there, it has been curiously sideways as if pegged into a narrow range and dredging up all the wrong sorts of memories from the late spring/early summer of 2015.

However, even residuals have the nasty habit (for the very few central banks like China’s which still adhere to Montagu Norman’s doctrine: “never explain, never apologize”) of showing up somewhere. The PBOC’s balance sheet update for the month of December 2018 provided an important clue. 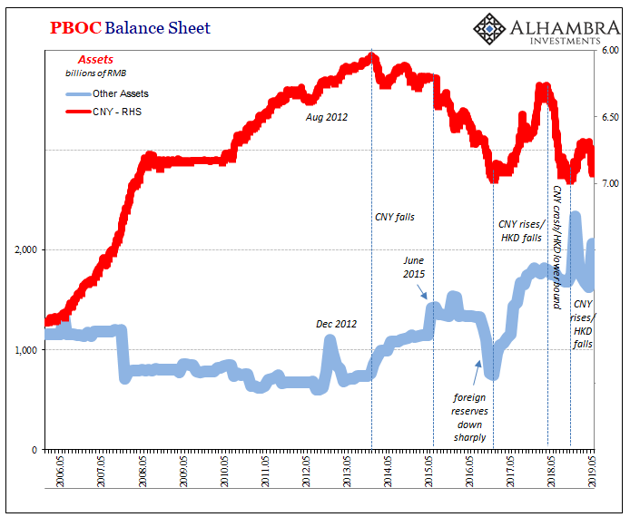 In the month of December, just as CNY defied formula, we found a curiously timed, enormous spike in “Other Assets” on the PBOC’s balance sheet. I scribbled my thoughts on it in January:

It’s not conclusive, of course, and could be related to a number of possibilities but this (above) seems pretty persuasive anyway. It isn’t a small number, either, an increase of RMB 587 billion, more than half a trillion, in the single month of December 2018.

The added benefit for the PBOC is that as a positive asset value, whatever this is, it contributes the same for the liability or money side. As we’ve chronicled for a long time, eurodollar squeezes of this type (#4) constrict China’s domestic money supply in the manner Banco’s 2013 paper outlined. If you can use swaps/derivatives instead of reserves and at the same time boost money supply, pure magic – for a little while.

Sure enough, during the month of May, the PBOC reports another surge in “Other Assets.” While we don’t have any more granularity than the monthly figures from the central bank, it isn’t too much to infer how, as CNY in the first half of the month plummeted closing in on 7.0, officials in the second half could have restarted much of what they might’ve been doing in December. 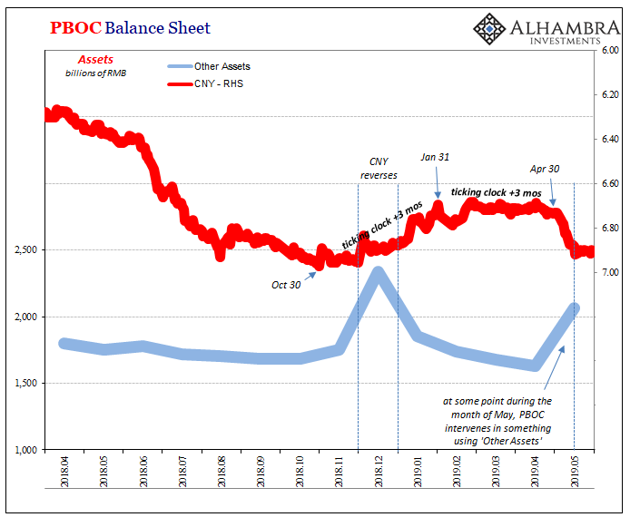 And within the last month, the rest of the monetary statistics are, well, almost how I described them above: not quite pure magic, though almost certainly better than the alternative. Bank reserves which had been falling by the largest amounts on record “only” declined by a little less than 5% year over year in May 2019. Currency growth managed 3.3%, which is still historically low but also the highest growth rate since last June (outside of Jan/Feb months skewed by Golden Week comps).

As noted last month, there does appear to be some added attention to at least the currency side, trading off bank reserves for physical issue. The fact that it might require such “pure magic” is actually a concern; something about desperate times and desperate measures.

Which brings us back to Deutsche Bank’s observation quoted at the outset. Not stimulus. At best, trying to hold on for dear life in lieu of the whole thing slipping into an even worse and more chaotic state. I’ve called it managed decline, but that might still be overstating it. 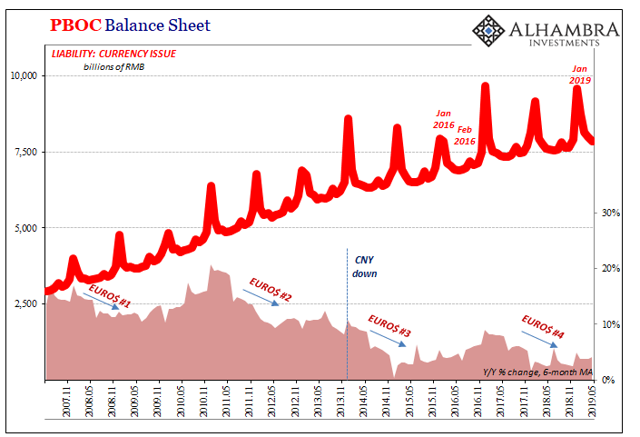 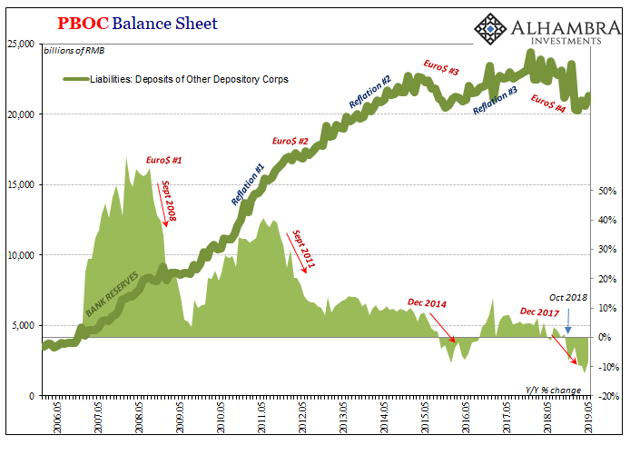 The reason? The very nature of the ticking clock, some unknown portion of which seems to be contained within these “Other Assets.” Some call it kicking the can down the road, but that doesn’t really do it justice. While kicking the can, you also increase the cost of doing it each and every time. As I wrote last month:

To oversimplify again, let’s assume you need to borrow $100 every day in short-term eurodollar markets just to keep doing the vital economic and financial things you do. One day, the eurodollar market demands $110 for whatever reasons including problems on its own end. As the central bank, I promise to help you by giving you the extra $10 because you not having that $10 means you don’t get all of the $100 and therefore all sorts of bad things for you as well as the economy.

I can sell $10 in assets I already own, which, as noted above, means that’s $10 subtracted from the domestic monetary base. Or, the Brazil option, I can give you $10 today by promising to obtain $11 three months in the future. It sounds absurd, but that’s really what happens and it keeps the $10 in place for the domestic base while simultaneously giving you an acceptable liability covering your $10 shortfall.

The numbers here are just for illustrative purposes, to give you a stylized sense of proportions. Still, after two and now three ticking clocks, the PBOC’s got to come up with ~$34 just so you can keep up with the original $100. It’s an enormously expensive proposition based on what it assumes – as all central banks do – that when the bill comes due, the eurodollar market is forgiving; has already forgotten what that temporary fuss might’ve been.

Structural eurodollar problems aren’t like that. They tend to back central bankers into smaller and smaller corners. Euro$ #3 ended up erasing nearly $1 trillion in China’s reserves – once that bill came due later in 2016 and the PBOC finally paying up all those deferred clocks. 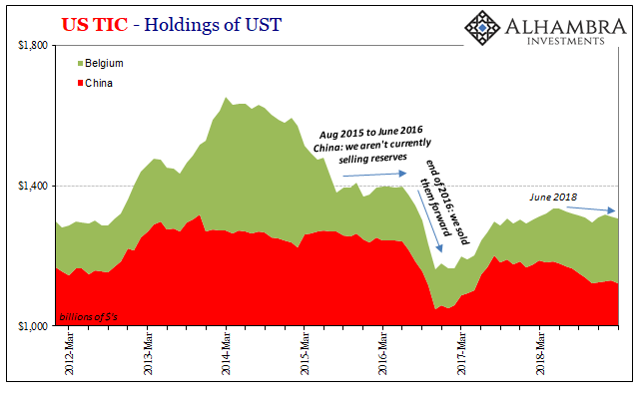 Unless Euro$ #4 abruptly ends tomorrow, they instead keep ticking and the costs driving around the dial keep piling up. With the curves all saying this fourth structural dollar outbreak is just getting started, therefore, again, not stimulus. Nor is it temporary.

It’s another downside risk to add on to the top of what is already a pile of them.