It has been nearly a year since I last covered CK Hutchison Holdings (OTCPK:CKHUY), and with so much development taking place, it is time to take stock again.

Hong Kong has had its fair share of trouble over the last year. It started with the regular mass demonstrations by the public against a proposed extradition agreement with Taiwan. Then came COVID-19, and last but certainly not least, Beijing’s imposing laws covering National Security. All of it has dented people’s confidence in Hong Kong’s future.

When we use traditional methods of valuation, like P/E, P/B, Debt/EBITDA, and dividend yield, CKHUY looks very attractive. 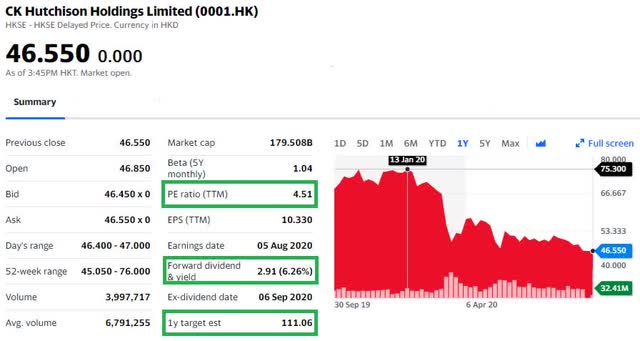 Is the market pricing CKHUY so low, because investors consider it to be a company that is doing most of its business in Hong Kong?

This article will try to answer this question.

For those that are unfamiliar with CKHUY, I will give a brief rundown of its businesses. As a conglomerate, it chooses to divide its accounts into 7 categories. They are:

It is surely listed on the Hong Kong Stock Exchange, but during the first half of 2020, CKHUY derived 11% of its revenue and only 3% of its profit from its businesses in Hong Kong. 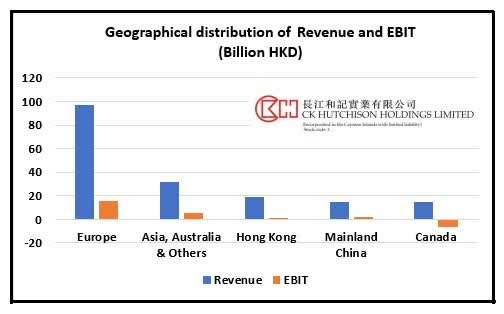 Now, let us look more into the profit and loss for the various business sectors on a granular basis. In terms of the balance sheet, we need to look at the conglomerate as a whole.

For the period ending June 30, 2020, the net profit after taxes to the ordinary shareholders for the entire company came in at HKD 13.17 billion. This was 28% lower than the corresponding period last year.

Most disappointing was the results from Husky Energy, in which CKHUY owns 69% of the shares. Its EBIT in the first half of this year was a loss of HKD 5.48 billion. That is 407% worse than the same period last year, where the EBIT was a positive HKD 1.8 billion.

The main reason for this loss comes from a non-cash before-tax impairment of C$1.4 billion, which equates to HKD 8.22 billion. Included in the Group’s EBITDA and EBIT results for the first half of 2020 was the Group’s 40.19% share of this impairment charge of HKD $3.10 billion.

The impairment was made primarily related to the upstream assets in North America due to lower crude oil price assumptions. If we strip out this non-cash event, Husky Energy still delivered positive cash flow from the operation of C$345 million in the first half of this year. This equates to nearly HKD 2 billion.

Its Retail business, as should be expected, also posted much weaker EBIT. It came down from HKD 6.59 billion to just HKD 2.97 billion.

CKH Telecom Group was also down, with an EBIT reduced from HKD 10.78 billion to HKD 8.99 billion.

The infrastructure portion is always going to be stable, and it was no different this year. Utilities are fairly recession-proof. Its EBIT only dropped just 9% from HKD 9.90 billion to HKD 9.00 billion.

Its impressive lists of Ports, with 291 berths around the world, saw lower volumes attributed to a slowdown in global trade. Volume reduced by 8%. There was also a pressure on margins as they registered a higher mix of low margin transshipment cargoes. All in all, it resulted in EBIT coming down 19% from HKD 4.2 billion to HKD 3.45 billion.

Finance & Investments saw a jump in EBIT from HKD 786 million to HKD 7.95 billion. The reason for this jump was the completion of a merger in the first half of this year between Vodafone Hutchison Australia and TPG Telecom Ltd. in Australia, which resulted in a net gain attributable to shareholders of HKD 9.2 million. CKHUY’s stake in the newly merged unit has now reduced from 43.93% to 22.01%.

Like so many other companies, the dividend took a hit during this pandemic. The company decided to declare an interim dividend of HK$0.614 per share which was down from HK$0.870 per share in 2019.

What is noteworthy is CKHUY’s past ability to grow the dividend.

Many of the businesses that CKHUY is involved in are highly competitive often resulting in compressed profit margins. It is therefore difficult to see many great opportunities for growth going forward.

Results in the most cyclical areas such as ports and retail should bounce back once the activity levels return from levels experienced before the pandemic.

Evidence of this can be seen already, as spot prices for container freight from China to California hit a record high this September. At the Chinese port of Ningbo-Zhoushan, the trading volume over the last three months has been higher this year than what it was in 2019. This should translate into higher volumes, and hopefully somewhat better margins for its ports in China.

Risks would be a deterioration in geo-political events leading to reduced consumer confidence. It is also of importance that CKHUY can maintain, and hopefully build a good relationship with the various leaders in Beijing. If the company, for some reason, is not successful in this, that could also add risks to the investment thesis.

Last year, I gave a bullish call on CKHUY. I even went as far as stating that I believed its share price could regain its glory days and trade around the HKD 100 per share.

In my last article from October 2019, I had a very good question raised by knoxmarlow. He commented, as follows:

Your article motivated me to look at CK Infrastructure Holdings. I was hoping for more “core” infrastructure. Again, a hodgepodge of assets, but not “cheap utility” assets. It feels like this stock may be decent in flat or up markets. But capital is limited, and I’m not feeling the catalyst to invest a significant amount of time here. Cheers

As with all potential value investments, it is important to try to ascertain what could be the catalyst that would reprice the share more in line with the average market P/E and P/B.

There are a few catalysts that could send its share price higher. One such catalyst would be if more people realize that the company is not that dependent upon Hong Kong, as it does seem to be the main reason it is being discounted so much at this point in time. Another catalyst would be a return to growth in the dividend distribution.

I am still bullish on CKHUY, as I believe it has mature businesses in areas that will always be needed. The transition from founder Li Ka-shing to his son Victor is also going well.

CKHUY should be able to continue to return money to its shareholders going forward, and it is, in my personal opinion, a good probability that the share will be priced considerably higher in a couple of years.

As we prepare for a third wave of coronavirus, investors should brace for another wave of market volatility. Back in February, I wrote a piece titled, “The VIX Is Catching A Bid From Coronavirus.” I […]