It’s been a rough month for Cisco Systems (CSCO), as its weak quarterly results and guidance have prompted the stock to decline by 17% since August 12th. While the company doesn’t offer investors much to cheer about in the near term, I believe the long-term growth thesis is intact. At the current valuation, I believe the stock presents an attractive investment opportunity for enterprising investors who are willing to bear some short-term headwinds.

When investing in Cisco, one must understand that they are essentially making a bet on the health of the global economy. Through its position as a networking giant, Cisco is often regarded as an industry bellwether. While Cisco is often and most visibly seen as a network solutions provider to large enterprises, we mustn’t forget that it also serves large swaths of small and medium-sized businesses (SMB), which have been more impacted by the effects of COVID-19. As the CEO noted on the last conference call, it was the SMB segment that saw particular weakness in the quarter, while it saw strength from very large enterprises.

However, I see this weakness as being short term, with the long term growth thesis being intact. Argus Research appears to agree with this sentiment, as it noted on August 19th that it expects Cisco to not only ride out this wave, but that once the storm passes, “the essential nature of Cisco’s connectivity offerings is likely to remain paramount.” Argus has a Buy rating on the stock with a $65 price target.

Meanwhile, Cisco continues to execute well on its continued transition to more higher margin software and services. In the latest fiscal year (ended July 31st), the company achieved 51% of its revenue from software and services, exceeding its target of 50%. In addition, 78% of its FY 2020 software revenue is in the form of recurring subscription revenue, exceeding its target of 66%.

While revenue has essentially stayed flat since FY 2015, EPS has grown at a respectable 8.7% CAGR over the same time period. This was driven by a combination of both margin expansion through the transition software and services, and through share repurchases.

(Source: Created by author based on company financials)

Going forward, I would expect continued margin expansion through both the transition to higher margin software and services, and through the $1 billion in annualized cost reduction that management expects to undertake between the current and next few quarters. The CFO provided additional color on the nature of the $1B cost reduction during the Q&A session of the last conference call:

“Where you’ll see the costs coming out, I’d say the majority of it in OpEx, I’d say maybe an 80/20 split [between OpEx and COGs]. We’ll certainly have some in COGS too on that side, on the services side, but mostly in OpEx. And in terms of timing, we should see a lot of this, most of this, the bulk of this coming out at the end of Q1 and a little bleeding over into Q2 depending on the country it’s in.”

Turning to analyst estimates, it appears that FY’21 is expected to be a down year, with growth picking back up in FY’22.

Based on this information, I wanted to calculate what the PEG ratio is, with the following inputs:

Applying this upside to the current price would yield a price target of $47.37. Given Cisco’s strong balance sheet, I find this valuation estimate to be reasonable. Analysts seem to agree that the shares are undervalued, with an average price target of $49.48.

Cisco Systems’ shares have lost value since it posted weak revenue results in the latest quarter, and provided weak revenue guidance for the current quarter. However, given that the company is a technology bellwether for the global economy, I’m willing to give the company a pass, due to the current macroeconomic weakness, which I see as temporary.

Meanwhile, the company appears to be executing well on its continued transition to higher margin software and services. Longer term, I see continued growth potential due to increased needs for global connectivity.

I see the shares as being undervalued at the current price of $39.81 and a blended P/E of 12.5. Based on the valuation exercise, I see a potential 19% upside from the current price. This makes it one of the few bargains in the generally overvalued technology sector. For this, and the reasons stated above, I have a favorable view of the stock and see further upside potential. 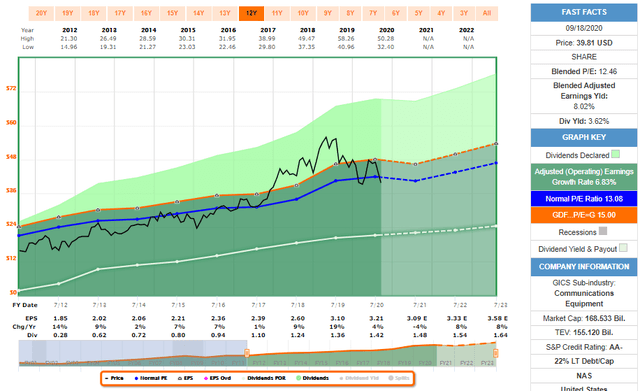