China is facing an unprecedented series of simultaneous deepening crisis that not only threatens its economy, but also stokes the Chinese government’s worst nightmare: social unrest. Here are the four unfolding and worsening crisis that China must handle successfully:

The first and continuing crisis began in 2017 was a pandemic amongst the pig population. As articulated in the New York Times article on 17 December 2019, entitled China Responds Slowly, and a Pig Disease Becomes an Epidemic, China had 440 million pigs, half the world’s pig population. The African swine flu has wiped out 50% of China’s pigs (or 25% of the world’s pigs), resulting in 20% higher food prices in China after seven years of price stability.

The article explains the failure of the Chinese government to halt the pandemic as follows:

Although the protests are concentrated strictly in Hong Kong and are handled by Hong Kong law enforcement, the threat of a political spillover in mainland China has forced the Chinese government to maintain a large law enforcement presence in nearby Shenzhen in case the situation spirals out of hand. An interesting perspective is that China seems to be better prepared at containment with bullets rather than bandages.

Prior to the suspension of transportation links from mainland China, the long-running, often intense protests already had a deleterious impact on the Hong Kong economy.

A strong direct challenge by the US on China trade practices brought China to the negotiation table. The newly signed agreement on Phase 1 solved little despite sometimes wild market gyrations during the course of negotiations. As Catherine Mann, chief economist of Citigroup stated at the National Committee of US-China Relations, “Forecast of China’s Economy for 2020” on 9 January 2020 in NYC: “There are different perspectives between financial markets vs. world markets on the trade war.”

This crisis is possibly the straw that could break the proverbial camel’s back politically, economically and socially.

Firstly imagine the sheer enormity of the containment challenge of an easily transmissible virus in Wuhan, a megacity of 11 million inhabitants, slightly less than NYC (8 million) and Chicago (4 million) combined and the surrounding 11 cities in the Hubei region.

Secondly, since the SARS crisis in 2003 (17 years ago), the Chinese government has shown gross negligence with minimal disaster planning or protocols to handle a similar viral spread particularly in a country that historically has suffered many natural disasters. Compounding the problem is the emergence and growth of megacities with its population density and mobility regionally and international as a critical transportation hub. Regardless of exactly how the coronavirus emerged, megacities are natural breeding grounds for viruses.

Thirdly, in a perverse irony, according to the Wall Street Journal article published 25-26 January 2020, Coronavirus Cases, Deaths Rise in China, in 2017, Wuhan built 69 hospitals in three years for a total of 335.

Statista, a German online data platform, provided the following chart on 27 January 2020 by the Global Health Security Index, entitled “The Countries Best and Worst Prepared for an Epidemic.”

For greater specificity on China’s ability (or lack thereof) to combat epidemics, one can refer to the link Global Health Security Index 2019 – China.

The enormity of the problem is that many Chinese were already traveling for the Lunar New Year prior to government-mandated lockdowns. The chart below by Statista on 22 January 2020 provides the scope of the migration: 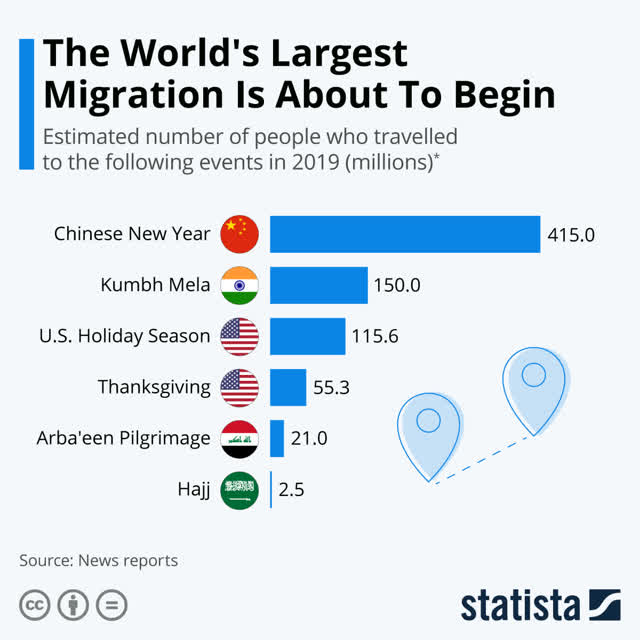 This begs the question: How can China, the second largest economy in the world, rank only 51 of 195 countries in preparedness for epidemics? Raising millions out of poverty and into the middle class yet unable to protect them with basic medical needs during an outbreak. The disconnect is not necessarily because lack of timely information on the progress of the virus, rather its inability to protect its citizenry with basic medical needs to at least contain the problem. The government’s other challenge is with 21st century communication fake news, misinformation and disinformation, which is disseminating faster than the virus itself.

The good news is that the Chinese government’s admission of international health organizations to assist with their containment efforts of the coronavirus provides it immediate credibility. Nonetheless, the actual hands on ability of the Chinese government to implement what’s required to stem the spread of the virus and maintain social order will drastically drain resources. It will also have the unintended consequences of exposing economic and political cracks in the system that have been tenuously held together by a robust economy.

The coronavirus is China’s most economically devastating crisis which has literally paralyzed and quarantined the earth’s most populous country of 1.4 billion. The markets have always considered China’s official economic figures as overstated; however, the actual figures have been historically quite robust for economies of this size. This crisis will cause considerable economic pain at levels not forecast or priced in by the market all which were based on economic fundamentals, not outliers or Black Swan events.

Undoubtedly, the official Chinese target of 6.1% for 2020 will be considerably lower. For this reason, I project China’s economic growth for 2020 to dip as low as 4.5%-5.0% depending on how the coronavirus plays out. Additionally because of universal lockdowns, the spillover is global and will push global growth near or into negative territory.

As with any downturn, nasty surprises await investors with firms that are financially weaker than reported that have stayed afloat through creative accounting smoke and mirrors. Additionally workers of these weak firms may find themselves unemployed which can stoke social unrest if the Chinese government is unable to provide them work.

Finally, there’s the issue of the direction and level of business confidence and productivity with respect to how, when and where will it bottom out. In the meantime, considerably higher levels of instability are percolating.

Because of China’s lack of preparedness for epidemics, the coronavirus crisis will last far longer than it should and will adversely impact every economic sector. Already demand has fallen in such sectors as travel, hospitality, leisure, luxury, finance, energy, etc. even if these firms have modest investments in the Chinese economy. In today’s global economy, most roads run (often literally) through China.

For this reason, investors should consider potential short plays in specific sectors and/or a broad-based approach such as the China Economic & Investment Index (MSCI China Index).