Chevron (CVX), as one of the big oil and gas firms on the market, is often seen as a stable giant. That’s why the hit from the company’s $10.4 billion upstream impairment, despite being anticipated, still stung. Regular people fall all of the time and it’s not surprising. Whenever heroes fall, the shock is heard around the globe. Chevron is that proverbial hero in this case. Even so, while the hit to the company for the quarter was painful, the path forward for the business looks robust and the plans made by management will ensure that investors receive excellent rewards from the entity for the foreseeable future.

A look at the good and bad

At face value, Chevron’s latest quarter was anything but great. To see this, we can really start by looking at just about any metric reported by the firm. Revenue, for starters, really took a beating, falling 14.2% from $42.35 billion in the fourth quarter in 2018 to $36.35 billion last year. This drop was not a one-quarter event though. The company’s total revenue for 2019 came in at just $146.52 billion. This implies a decline of 11.9% compared to the $166.34 billion the company reported for its 2018 fiscal year.

Lower energy prices have been instrumental to these declines, as energy market watchers might expect. In all, though, the company did see some positive impacts. While realized prices negatively affected Upstream profits by $4 billion, improved liftings helped to offset this to the tune of $1.54 billion. Production volumes for the firm were also on the rise. According to management, excluding the effects of asset sales, volume was up 5.4%, and with them it was up 4.4%.

This drop in sales ultimately translated to a rather slammed bottom line. Operating profits for the company’s Upstream segment in the fourth quarter last year were -$6.73 billion, down from $3.29 billion a year earlier. Downstream segment profits were down from $859 million to $672 million over the same period of time. For all of 2019, segment profits came in at only $2.58 billion for the entity’s Upstream business compared to an impressive $13.32 billion in 2018, while Downstream profits declined from $3.80 billion to $2.48 billion over the same period of time.

Segment profits are important because they play a massive role in the company’s overall net income, but perhaps the more useful metric to look at is operating cash flow due to the absence of non-cash items in it. During the fourth quarter, Chevron generated operating cash flows of $5.6 billion. This was down significantly from the $9.1 billion in cash flows generated a year earlier. While this is drastic, it actually didn’t affect 2019’s overall operating cash flows. For the year, these came in at a healthy $27.3 billion. This is down only 10.8% compared to the $30.6 billion seen a year earlier. 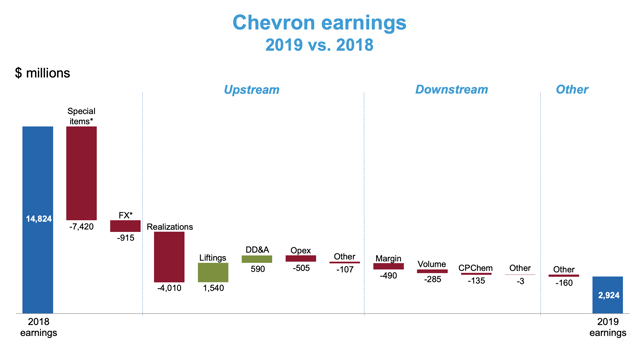 While operating cash flows were only modestly lower during the year, capex was a bit higher at $14.1 billion (versus $13.8 billion in 2018). These two disparities combined to push free cash flow for 2019 down some, but at $13.2 billion compared to the $16.8 billion seen in 2018, the amount of cash flows were still quite high. This helped the company to continue making sizable moves aimed at rewarding shareholders. 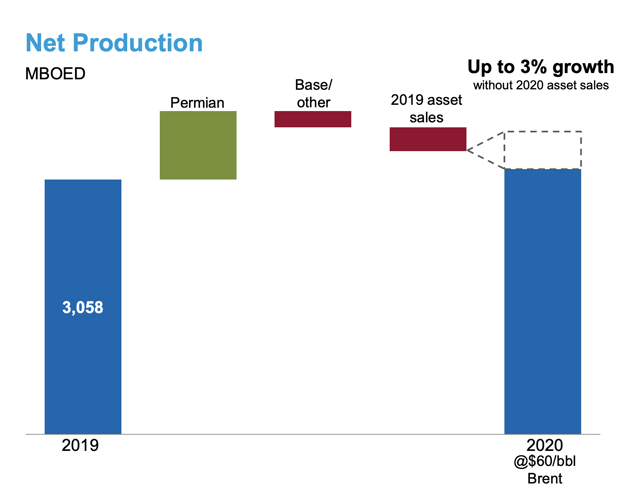 During the latest quarter alone, the company declared and completed share buybacks in the amount of $1.25 billion. Management also decided to work on paying down debt. Using $3 billion in proceeds from asset sales, the company ultimately paid down debt in the amount of about $7.8 billion for 2019 as a whole, though this did come at the cost of some cash. Cash and cash equivalents fell from $10.3 billion to $5.7 billion during this period. Today, debt stands at $26.97 billion, while net debt is $21.3 billion. Also during the year though, dividends paid by the firm amounted to $9 billion. 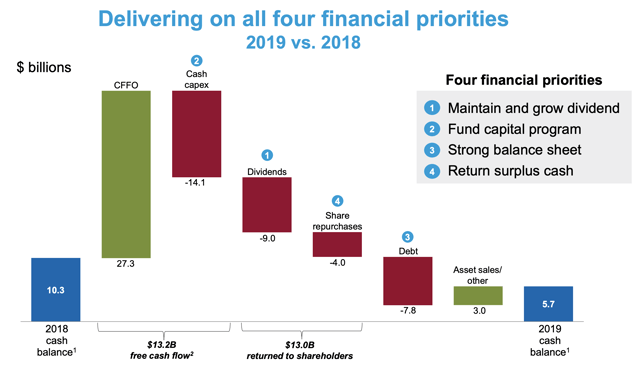 Though fourth-quarter results were less than ideal, the most important metrics (operating cash flow and free cash flow) remained robust. Heading forward, management seems confident that this will remain the case. In addition to focusing on maintaining and even growing the dividend over time, the company said that its goal is to maintain at least $5 billion in annual run-rate share buybacks. More likely than not, this figure will actually grow, but even if it doesn’t, that’s okay. Keeping the company’s market cap unchanged, buying back $5 billion worth of stock every year would translate to the business buying back 2.4% of its stock back, by market cap, each year.

This is not to say that things will always go great for Chevron. Undoubtedly, in this volatile energy space, the company will see its ups and its downs. All I do know is that its market cap/operating cash flow multiple of 7.6 and its market cap/free cash flow multiple of 15.8 look to be on the low end of where a high-quality operator should be. With net debt coming in at just 0.78 times operating cash flows and only 1.61 times free cash flow, the leverage situation for the firm is also perfectly under control.

Right now, the picture facing Chevron may be less appealing in the eyes of investors than it was a year ago, but taking all things into consideration, the situation is nice. Sure, the impairment hit is not what shareholders would like to see, but cash flows are what matter most at the end of the day and those came in strong year over year. Absent something really big and unexpected like fraud and/or a true global downturn to rival the last one, the risks associated with Chevron appear low and the upside potential is attractive for a market leader.

Crude Value Insights offers you an investing service and community focused on oil and natural gas. We focus on cash flow and the companies that generate it, leading to value and growth prospects with real potential.

Subscribers get to use a 50+ stock model account, in-depth cash flow analyses of E&P firms, and live chat discussion of the sector.

Sign up today for your two-week free trial and get a new lease on oil & gas!