Following the massive fiscal and monetary injections from the US government and the Fed, we argued in early April that the recovery in US equities could last for a while and that the stock market could significantly diverge from economic fundamentals. Here we are a few months later with equities trading at higher levels than their February highs, completely ignoring the economic reality and the massive rise in unemployment combined with a surge in non-performing loans as the government extends the restrictive economy. Hence, investors have been asking the following question: how long can the equity market diverge from reality?

Historically, analysts have always looked and used fundamentals as a leading indicator of the economic outlook and therefore stock market performance. Hence, some analysts have attributed the strength in equities to the massive improvement in economic data. Figure 1 shows that economic surprise indexes have co-moved strongly with US equities in the past few years, especially since the start of the year.

We disagree with that statement as we think that a lot of economic indicators (such as the ISM for instance) are very sensitive to equity moves and therefore the improvement in the economic surprise index was driven by the surge in equities (and not the other way around). The Fed and US government constantly intervened in the markets between March and May in order to stop the US economy from falling into a deflationary depression, which resulted in a massive rebound in stocks and therefore pushed up fundamentals. We can notice that fundamentals have started to weaken gradually in the past two months amid the lack of stimulus, which led to a more volatile month in September.

We are confident that one of the most important factors behind the equity recovery we have seen in the past 6 months has been the massive liquidity injections from the Fed, which nearly doubled the size of its balance sheet from $4 to $7 trillion (figure 2, left frame). In the past cycle, we saw that the dynamics of the Fed’s balance sheet has been important for equities, especially in times of elevated uncertainty (figure 2, right frame). Hence, as the Fed balance sheet has remained steady at around $7 trillion in the past few months, US equities are struggling to keep the bullish momentum.

In addition, hopes for a second stimulus before US elections have fallen and therefore could start to be reflected in US fundamentals in the coming two quarters and weigh on asset prices in the medium term.

In addition to the massive collapse in profits amid the massive restrictions imposed by governments to fight the pandemic, we can also notice another interesting divergence between credit and equities total return. Figure 3 (source: BoAML) shows the high yield/high grade total return relative against the S&P 500 total return; after co-moving strongly in the past 20 years, the two time series have diverged drastically in the past two years, and especially since the March selloff. This clearly shows that the credit market is currently pricing in much lower equities.

Since the start of the pandemic, rating agencies have constantly downgraded an important number of companies, especially in the gaming, lodging and leisure, media & entertainment and airline & aviation sectors. It is important to know that credit analysts traditionally use the proportion of upgrades to downgrades as one of the key inputs when forecasting default rates in developed economies. Hence, the rise in default rates (which governments try to defer as much as possible) will eventually be negative for risky assets in the medium term. 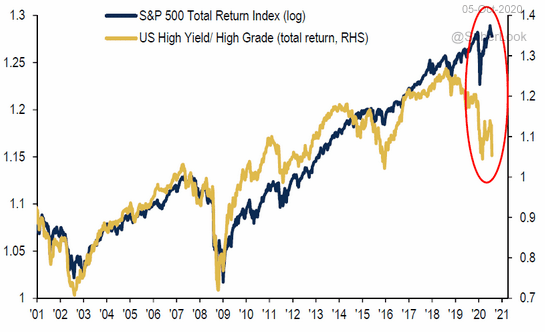 Outlook for US equities

Even though the upside gain in US equities still remain fairly limited in the coming months (uncertainty over US elections, Brexit, poor fundamentals), we do not expect a massive correction as the Fed will immediately step in and inject liquidity in order to avoid the equity market from collapsing. It is clear that the central bank has become an ‘anti-selloff’ body that will do whatever it takes to prevent equities from falling too aggressively.

Therefore, the risk-reward remains very limited for US equities, with a small upside gain in the near term while a 10 to 20 percent correction seems very likely. Investors could either wait to buy the dip in case the market corrects abruptly or sell some OTM puts (with strike 20% below spot) as the Fed will intervene if the drawdown is too severe.

Disclosure: I am/we are long USDCHF. I wrote this article myself, and it expresses my own opinions. I am not receiving compensation for it (other than from Seeking Alpha). I have no business relationship with any company whose stock is mentioned in this article.

© Reuters. Australia stocks lower at close of trade; S&P/ASX 200 down 0.55% Investing.com – Australia stocks were lower after the close on Friday, as losses in the , and sectors led shares lower. At […]