The Canadian Dollar cautiously rose against its major counterparts on Thursday despite a rather lackluster session for sentiment-linked crude oil prices. WTI was tepid on an announcement from the OPEC+ Joint Technical Committee which recommended output cuts of 600k barrels per day. This follows an aggressive drop in crude since early January against the backdrop of the coronavirus denting Chinese demand.

Supply restrictions can boost the commodity, but perhaps Russia’s reluctance to commit to OPEC’s position may have contributed to a muted day for oil. Rather, the Canadian Dollar seemed to be focused on local sentiment. The S&P/TSX Composite Index soared to a record, climbing 0.6% as BCE Inc. raised dividends by 5% following higher-than-expected profits from the fourth quarter.

Equities received a cautious boost from the Asia Pacific trading session when China announced that it would halve tariffs in about $75b in U.S. goods on February 14. Follow-through was lacking on Wall Street where after an upside gap, the S&P 500 traded largely sideways and ended Thursday 0.33% to the upside. The US Dollar rose ahead of tomorrow’s NFPs report, seeing most gains during the North American session.

S&P 500 futures are little changed heading into Friday’s Asia Pacific trading session, pointing towards a mixed day to wrap up the week. The Australian Dollar will be closely watching incoming Chinese trade data for January, due at an unspecified time. China is Australia’s largest trading partner, softer-than-expected data amid the Wuhan virus outbreak may risk sending AUD/USD to the downside.

On the whole, the Canadian Dollar may be sitting at key resistance points against its major counterparts. Below, I have a majors-based Canadian Dollar index which shows its average performance against the US Dollar, Japanese Yen, British Pound and Euro. The index recently bounced on key rising support from 2018. Now prices are facing near-term falling resistance from late January which may send CAD to the downside. 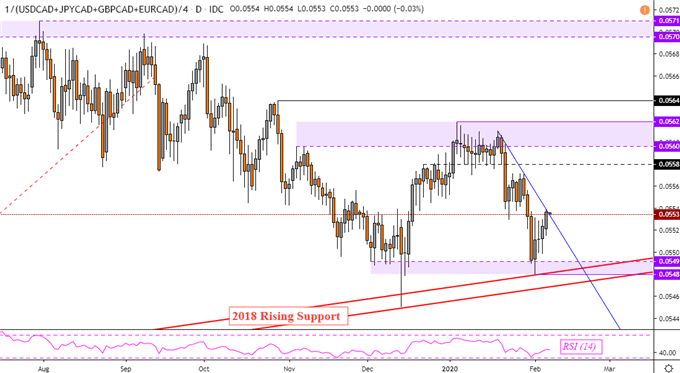