The Canadian Dollar was the best-performing major currency on Tuesday as a turnaround in market mood fueled sentiment-linked crude oil prices. The S&P 500 experienced its best day since mid-October, rising about 1.01 percent after its worst session from roughly around the same time. US Treasury prices weakened on the front-end, underpinning the cautiously upbeat mood in financial markets.

Investors appear calmed by efforts to contain the Wuhan Virus. The Chinese government has tightened regional travel restrictions and from a financial standpoint, pledged to provide ample amounts of liquidity. Other efforts include Starbucks, a popular U.S. coffee chain, shutting down about half of its locations in mainland China. Airports around the world have also implemented passenger screenings for symptoms.

Crude oil is a key source of revenue for Canada. An improving outlook to global growth as coronavirus fears ease could thus spillover into the economy, sending the Canadian Dollar higher. Local front-end government bond yields rallied. The cheery mood may have also been compounded by upbeat US consumer confidence data and rosy earnings from Apple.

How can you trade around data?

With that in mind, should Asia Pacific benchmark stock indexes follow Wall Street higher, the anti-risk Japanese Yen may extend its decline from Tuesday. That could also benefit the pro-risk Australian Dollar and New Zealand Dollar. AUD/USD is also awaiting Australian CPI data, but odds of an RBA rate cut for next week’s meeting have cooled to only about a 24.4% chance. An upside inflation report may further dim these expectations, pushing the Aussie to the upside in the near-term.

Join me at 00:15 GMT on Wednesday as I cover Australian CPI data and the impact on the AUD/USD and AUD/JPY outlook!

The USD/CAD has left behind a Dark Cloud Cover following Tuesday’s close. This is a bearish candlestick pattern that with confirmation, may precede a reversal of the near-term uptrend from the beginning of this month. That would place the focus on immediate support which is a range between 1.3111 – 1.3134. 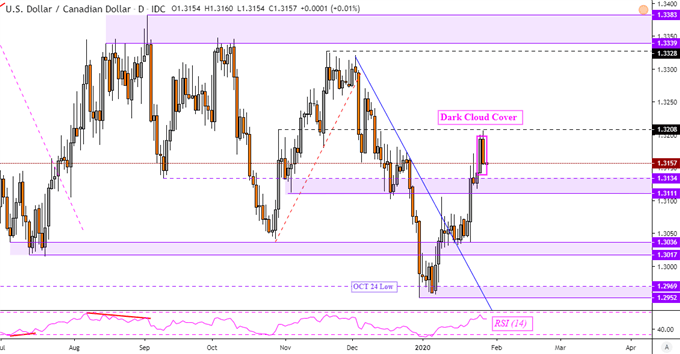 This is as WTI Crude Oil left behind a Bullish Engulfing candlestick pattern. With upside confirmation, this can translate into a reversal of the near-term downtrend from earlier this month. That would place the focus on immediate resistance at 55.35 which is the 23.6% Fibonacci retracement level.

What is the road ahead for OIL in the first quarter? 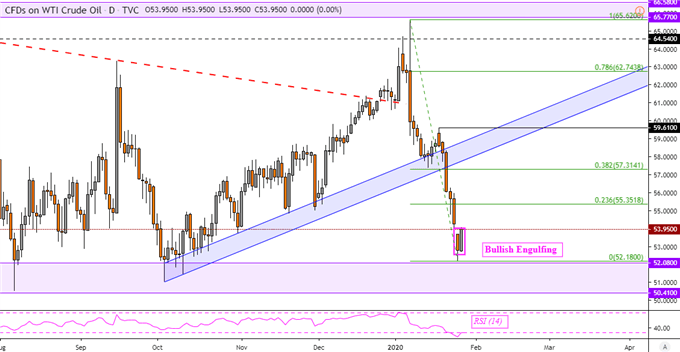