Campbell Soup (CPB) is doing a decent job of reducing costs and improving its results in the process. I estimate that margins will rise during the next years. Unfortunately, the company is extraordinarily leveraged and its dividend yield of 2.87% is not better than peers. Combined with the fact that shares are trading at a steep premium to my fair value estimate of $37.60, I currently see no reason to own shares of Campbell Soup.

Margins are on the decline

Both the operating margin and net margin of Campbell Soup are lower than they were back in 2016. Operating margin retracted by 40bps to 14%, while the net margin fell from 7.1% to 2.3%. One cause for the extreme drop in net margin is materially higher interest expenses due to the debt increase in 2018 from the Snyder’s-Lance acquisition for $6.1 billion. The company has identified the new for restructuring and has been going through a cost savings program in an effort to improve results.

Campbell Soup is on track to complete its cost savings program during the next three years. The company has already realized a total of $605m in combined savings through its enterprise cost savings program as well as cost savings from synergies from the Snyder’s Lance integration. $45m of this figure have been achieved during Q1 of FY2020. For the full FY2020, CPB expects to realize a total of $140 – $150m in savings. At the high point of that range this would imply another $105m during the next three quarters. This would bring the total cumulative savings to $710m, leaving $140m in additional savings for the following two years. 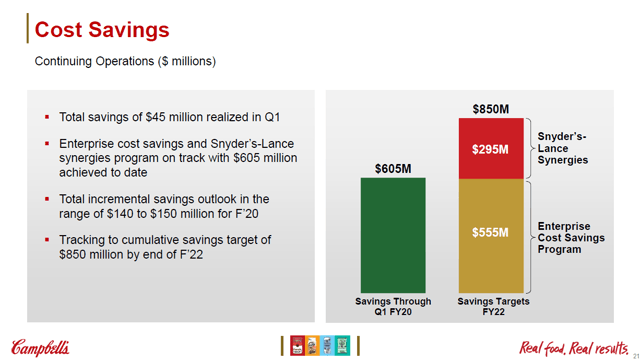 I find that if Campbell Soup can realize all planned cost savings, it can raise its operating margin to 16.7% until the end of 2022, adding $280 million in operating income in the process. This would be an increase of 25% over the 2019 results.

Source: My model, values based on predictions

Campbell should be able to achieve these savings to their full extend since they have already locked in about three fourths of the entire sum. Realizing the remaining fourth should be doable within those three years. The target of 16.7% operating margin also seems reasonable to me, as most of the gains rely on cost savings with only marginal gains coming from the very modest 1% topline growth assumptions.

The dividend is safe but don’t expect major increases soon

Campbell pays a dividend of $1.40 per share which makes its current dividend yield 2.87%. The company has kept its dividend flat since 2017 and has only raised its dividend once during the past five years, though they have bought back $1 billion worth of stock during the years from 2011 to 2016. Since 2017, a new buyback program worth $1.5 billion has been in place. Although shareholders have had to forego dividend increases, they have benefited from the safety of a conservative payout ratio of around 40% of free cash flow. It seems unlikely that that Campbell will significantly increase its dividend in the coming years given the company’s extraordinarily high debt level, but the current dividend is sustainable from a payout ratio perspective. 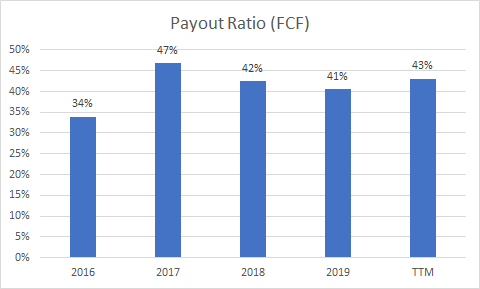 The health of the balance sheet of Campbell Soup can only be described as abysmal. The leverage and debt to equity ratios ballooned in 2018 after the Snyder’s-Lance acquisition. While the company has since started reducing debt, leverage remains enormous with a leverage ratio of 10.5 and a debt to equity ratio of 6.67. Unsurprisingly, the interest coverage currently sits at only 3.3. The severity of this debt pile means that Campbell will have to pursue a very aggressive repayment policy which will limit distributions to shareholders for the foreseeable future. It also makes the company unattractive to shareholders since its peers are less leveraged while paying similar dividends and having much better margins. 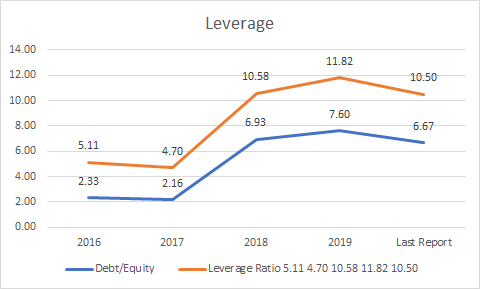 To value the equity in Campbell Soup I employed a discounted cash flow model. I assumed that the company will be able to realize its planned cost savings and achieve a 16.7% operating margin by 2022 as well as grow topline revenues by 1% which is the high point of the company guidance. These assumptions are achievable in my eyes, but they remain uncertain until they are eventually realized. At these assumptions, I get an equity value of $11.3 billion or $37.60 per share, implying a 23% downside from the current trading price of $48.79 per share. 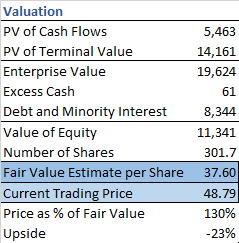 Source: My model, values based on predictions

Campbell Soup is on track to improve its operating performance as well as pay off its massive debt pile. Still, its performance measures are significantly worse than peers. Additionally, shares are priced way too generously. In my view, the fact that this is company is in the middle of a restructuring phase is not priced into the stock accordingly. I do not see a reason to own shares of CPB at this time, since I do not think they are worth the current trading price, neither are they more attractive than shares of competitors.

Additional disclosure: Disclaimer
This is neither an offer nor a recommendation to buy or sell securities. The points presented in this article are estimates and opinions of the author and may or may not correctly indicate the future.I am not a financial advisor and this report is not to be considered financial advice. Please always conduct your own research and consult a financial advisor before making any investment decisions.