The British Pound spent most of last week focusing on fundamental developments impacting monetary policy expectations rather than on sentiment and Brexit. As widely anticipated, UK Prime Minister Boris Johnson’s commanding Conservative majority saw his EU withdrawal bill pass swiftly through Parliament. That was no surprise, but what did catch traders’ attention was a series of uplifting local economic data.

A rosy jobs report and the highest business confidence since April 2014 poured cold water on near-term Bank of England (BoE) rate cut expectations. By the end of Thursday, the British Pound was outperforming against its major counterparts such as the US Dollar, Euro and Australian Dollar. This momentum may be at risk in the week ahead.

What is the road ahead for the Pound in the first quarter?

The UK is expected to leave the European Union on January 31 after the EU Parliament votes on Johnson’s Brexit deal come Wednesday. That is widely priced in and is unlikely to draw much volatility in Sterling. In the medium-term, the Pound could be at risk to selling pressure if the two sides fail to reach a trade agreement by year-end. Mr Johnson has made it clear that he wants it completed before 2021.

In the near-term, all eyes will be on the Bank of England rate decision on Thursday. Futures markets are pricing in a roughly 60% chance a 25-bp reduction in the benchmark lending rate. This will also be Governor Mark Carney’s last meeting before Andrew Bailey takes the helm. If the former reduces interest rates down to 0.50% from 0.75%, GBP/USD will likely refocus to the downside, and vice versa.

Learn about trading currencies such as GBP

Another key event risk for the British Pound lurks across the Atlantic Ocean. On Wednesday, the Federal Reserve will be holding its monetary policy announcement. Regarding interest rates, the Fed is expected to leave them unchanged. What the markets will likely be focusing on, especially the US Dollar, is how the central bank is going to proceed with its repo operations.

These have brought extra liquidity into financial markets after a credit crunch temporarily pushed interest rates above target in September. This caused the central bank’s balance sheet to swell much like what was the result of quantitative easing after the 2008 financial crisis. About half of the Fed’s unwinding efforts from late 2017 to August 2019 have been reversed, helping to fuel gains on Wall Street.

The Fed has signaled that come February, the size of term operations will be reduced to $30b from $35b. Details beyond that are lacking. If the central bank outlines a path towards a continuation of unwinding these operations, we may see the S&P 500 aim lower in “risk-off” trade. That may boost the appeal of the haven-linked US Dollar, sending it higher against the British Pound.

On the chart below, I have a comparison of a majors-based British Pound index against an equivalent for the US Dollar. The index is composed of an average of GBP’s performance against the most-liquid currencies. These include the Euro, Japanese Yen, Australian Dollar and US Dollar. Broad gains in the Greenback, especially as it holds a relative yield advantage, will likely weigh against average prices in Sterling. 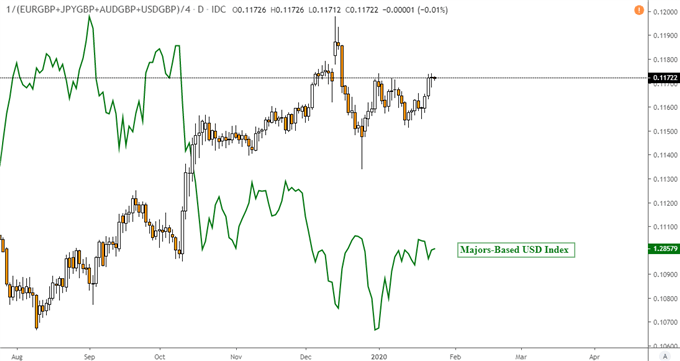 Madmaxer/iStock via Getty Images Investment Thesis “Green” energy is a prevalent theme among everyday investors fueled by a ‘common-sense’ thought process. ‘Save the world from climate change. Solve the energy crisis. Do it or you’ll […]