Overnight index swaps are pricing in a less-than even chance of a rate cut at the upcoming Bank of England rate decision. However, this does not suggest there is no scope for GBP losses. The source of volatility will likely come from commentary by BoE Governor Mark Carney who will be giving his final press briefing as head of the central bank before he is replaced by Andrew Bailey.

Mr. Carney, in addition to other Monetary Policy Committee (MPC) members, have recently debated the merits of “near-term” stimulus in light of weakening economic activity from the affliction of domestic political peril. This has contributed to economic data missing baseline projections and subdued inflationary pressure with figures continuing to show prints below the central bank’s 2 percent target.

Advanced, quarter-on-quarter US GDP on an annualized basis is expected to show growth for Q4 at 2.0 percent, slightly lower than the prior report at 2.1 percent. Robust spending over the holidays may be the force behind better-than-expected GDP data since personal consumption accounts for over 70 percent of the US economy. Core PCE data – an inflation gauge the Fed is strongly fond of – will also be published.

Amazon’s fourth-quarter earnings are expected to show $86.09 billion in revenues, an 18.9 percent increase on a year-on-year basis. This comes after the company announced earlier this year that it saw record-breaking sales amid a holiday shopping frenzy. Better-than-expected earnings could bright overall market mood and uplift the US Dollar if it further dampens Fed rate cut bets after yesterday’s FOMC meeting.

As outlined in my British Pound technical piece, GBP/USD appears to be forming a continuation pattern known as a Symmetrical Triangle. The previous uptrend suggests – at least, from a technical standpoint – that the pair may experience an upside breakout. However, the fundamental environment points to a more bearish outlook for the British Pound, thereby placing GBP/USD at the crux of two conflicting points of view. 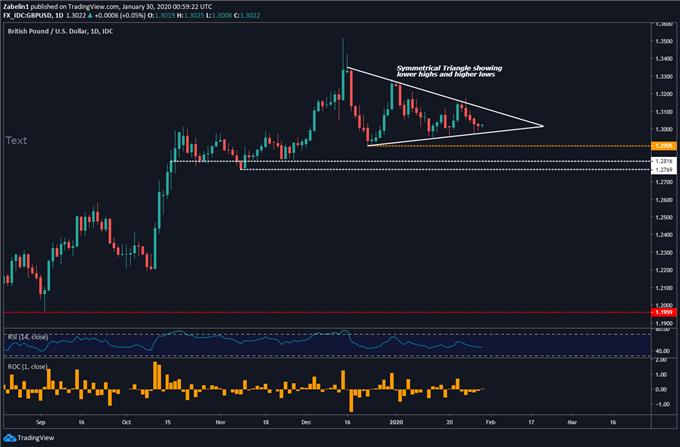