Six months ago I wrote my first article on Box, Inc. (BOX) entitled “Box: Stay On The Sidelines This Year“. As you may be able to guess, I gave Box a neutral rating and the stock price gain since publication is -3.5%, much less than the performance of the S&P 500 which was 9%.

Now I am back to revisit this company and I have to say, the problems I identified in my last article are still present, including the decline in revenue growth, failure to meet the Rule of 40, falling gross margin and SG&A expense is too high.

I have to apologize for the lack of originality on my part as I have given this article the same title distinguished by “Part 2”. This pretty much captures my sentiments for this stock. The company performance is lackluster and there are many better opportunities out there so I wouldn’t get too fixated on this stock. My rating for Box remains neutral.

Just for the record, the declining gross margin and high SG&A expense can be partially explained by the ongoing data center optimizations.

“Non-GAAP gross margin came in at 70.7% versus 73.6% a year ago, and in line with expectations as we delivered optimizations to our data center infrastructure. As we migrate our data center footprint to more scalable lower cost regions, this is leading to temporarily duplicative costs. As such, we expect gross margin in Q4 to be roughly in line with Q3, for FY ’20 to be roughly 71%, and for gross margin to trend upwards starting in the back half of FY ’21.”

I will look forward to seeing some improvement in margins after the completion of this optimization project perhaps at the beginning of next year.

When it comes to software companies, I don’t rely on traditional value factors; instead, I focus on other measures, such as the software company “Rule of 40” and relative valuation, a concept that I recently developed that compares forward sales multiple versus estimated sales growth.

One industry metric that is often used for software companies is the Rule of 40. It is an industry rule of thumb that attempts to help software companies ascertain how to balance growth and profitability. There are different ways of calculating the Rule of 40 – some analysts use EBITDA and others use free cash flow margin. I use the free cash flow margin TTM.

The Rule of 40 is interpreted as follows: If a company’s growth rate plus free cash flow margin adds up to 40% or more, then the software company has growth and cash flow in balance and is considered financially healthy. In Box’s case:

The calculation comes out much lower than 40%, indicating that Box has a lot of work to do in order to achieve a healthy balance between growth and profits.

When a company like Box fails the Rule of 40, I like to examine the company’s SG&A expense margin. In the case of Box, I am concerned by the high margin (see below). Note that the SG&A expense margin includes R&D in the graph below.

The SG&A expenses are 90% of the total revenue. This is quite a high margin for a company that is growing revenue by only 16% annually.

I determine stock valuation on a relative basis by comparing sales multiples and sales growth to the company’s peers. I believe that high-growth companies should be more highly valued than slow-growth companies. After all, growth is a prime factor in valuation models such as DCF. Higher future growth results in higher valuation and, therefore, higher EV/sales multiple.

To illustrate this point, I created a scatter plot of enterprise value/forward sales versus estimated Y-o-Y sales growth for the 152 stocks in my digital transformation stock universe. 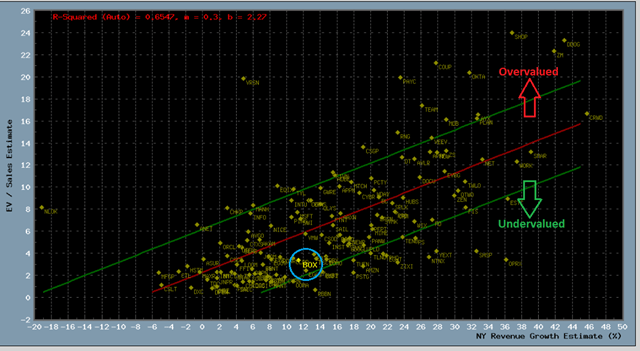 As can be seen from this scatter plot, Box is sitting well below the best-fit line, suggesting that its forward sales multiple is very undervalued relative to its peers, given its estimated future revenue growth rate.

The Sales/EV multiple tells me that the stock is quite undervalued, but my value assessment changes when I substitute next year’s earnings estimates for forward sales.

The results shown on this second scatter plot suggest that Box is actually overvalued based on next year’s earnings estimates.

Box is a leader in the highly competitive cloud content management market segment. Annual revenue growth has been in decline since 2015 and is now 16%. Box fails on the Rule of 40, and this is made worse by very high cash burn as measured by the SG&A expenses. The gross margin is falling and will likely remain low for the remainder of the year due to data center duplication.