We have seen Boeing making some nice price movements. While I haven’t been especially upbeat on the prospects for share prices for the better part of the past two years, when share prices finally headed into the sub-$100 region as we had expected based on Boeing 737 MAX crisis costs projections, we marked the opportunity on Boeing based on the reason for the sell-off (which was not the Boeing 737 MAX crisis) and subsequently we recognized that Boeing would start moving based on a combination of Boeing 737 MAX timeline convergence and positive vaccine news even though the company’s fundamentals would not improve rapidly. Given that Boeing shares indeed did head to the anticipated price range and subsequently went to $200+, more than doubling in value, the call was right in both directions despite some readers criticizing those calls. The share price performance speaks for itself and those that have been following my work have seen the calls being made in both directions and have been able to execute on that.

Over the past two years, I have read a lot of inaccuracies on how the Boeing 737 MAX issues have been reported but also how things have been widely interpreted by readers without the nuance and background required. I have had a full-time job covering the Boeing 737 MAX because there was so much unfounded chatter going on and often personal attacks, which somewhat surprised me because we are on an investment platform where I have believed for a long time that people go by fact and knowledge-driven analysis rather than emotional outpours while keeping discussions civil. The contrary has been true, but I simply cannot cease contributions because some readers engage in the practice of shooting the messenger rather than discussing content of articles because I see there is an even bigger group that reads to inform themselves better and exchange views in a constructive way.

In this analysis, I want to have a look at the costs for the modifications required per the NPRM (Notice of Proposed Rule Making) issued by the FAA and show that these costs are not such that the Boeing 737 MAX margins will be under significant pressure.

Next to flight crew training, the changes that are required before the Boeing 737 MAX can re-enter service are the following:

Each of these 5 points addresses specific changes made to the Boeing 737 MAX. The first point embodies the updated logic for the Maneuvering Characteristic System so that it cannot trigger repeatedly and the authority of the system has been reduced. The second point is about relaying messages to the flight crew raising awareness of what is happening. When an AoA disagree occurs now, a message will now be displayed on the primary flight display which should increase situational awareness. Previously, this alert was incorrectly linked to an optional feature for angle of attack indications which airlines either purchase or not (largely depending on the way the flight crew was trained or the previous flight experience of the bulk of the flight crew). The third point really is about updating the operational procedures for the aircraft in case of angle disagree alerts so crews can better recognize this situation when it occurs and deal with it accordingly. So, points 1 to 3 are all about getting the new flight control computer architecture into the MAX and updating the control law logic for the MCAS and relaying messages to the flight crew and updating the operational procedures.

The 4th point centers on mandating rerouting the wiring for the horizontal stabilizer trim, which has to adhere to the most recent separation standards. Previously, there was a theoretical chance that a short circuit could result in uncommanded stabilizer movements and although the Boeing 737 Next Generation operations showed this is more a theoretical possibility than an actual occurrence in reality, the FAA mandated the fix to make a statement to Boeing.

Point 5 is there to make sure the angle of attack sensors are functioning properly and a test flight needs to be carried out to make sure everything is working correctly.

So, what we see is that with a five-step plan the FAA is mandating inspection of the angle of attack sensors, so that disagrees are less likely to occur, the FCC architecture and MCAS trigger logic are updated, situational awareness is increased and flight operation procedures are updated and the wiring of the Boeing 737 MAX stabilizers is updated to decrease the probability (which was already extremely low) of an uncommanded stabilizer movement.

All of these jets will need to be updated. At an assumed price of $14,160 for all aircraft that would bring the costs to $11.8 million with some costs to update the Minimum Equipment Lists, which as the name says is the list of minimum equipment required on board for the aircraft to be considered airworthy, bringing the total to $11.8 million. Boeing will be carrying the costs for these changes and what we are seeing is that the estimated costs are significantly higher due to the required rerouting of the horizontal stabilizer trim wiring, but it suffices to say that $11.8 million is not a huge sum… it’s about the costs of a fifth of a single Boeing 737 MAX to fix over 835 aircraft. It is hardly something that will move the needle for the program and it shows that previous comments by some readers and naysayers claiming that the rewiring would be so expensive it would be easier and cheaper to scrap the already built aircraft are completely incorrect and completely misguided.

The main conclusion we can draw is that as expected, the proposed changes bring the Boeing 737 MAX within scope of compliance with further enhancements upcoming. Nothing new there. However, what should be kept in mind is that the costs to fix the already built Boeing 737 MAX aircraft are a very small sum, whereas some had previously expected the costs for the changes to be so large that scrapping these aircraft would be plausible. The current estimates, however, show the contrary is true. Boeing will pay an extremely tiny sum on fixing these aircraft and 450 of the 835 aircraft that are to be fixed will be used as vehicles to reduce the Boeing 737 MAX liabilities, which kicks off an important stage in Boeing’s road towards a healthy balance sheet.

When it comes to reconfiguration costs for white tail aircraft, the costs could add $96 million to $620 million but it is no given that Boeing will be paying for this and if they do, it will be in the form of reduced pricing on the aircraft where in the best case the only added costs would be repainting the jet. Even in the hypothetical case that Boeing pays all costs, you would end up with around $632 million in costs to modify the jets where mandated by regulators and reconfiguration costs and that will allow Boeing to start chipping away billions in liabilities. $600+ million is a lot of money, but it’s hardly a huge loss that Boeing will be incurring on unit level even if it has to compensate airlines for the buyer-furnished equipment. In fact, on program level this would put less than a percent in margin pressures. What puts some additional pressure are the costs to retrain flight crews for the Boeing 737 MAX, but these costs are somewhat harder to estimate as it requires detailed insights into the number of Boeing 737 pilots per operating airline. I’d estimate those costs currently at $200 million bringing the full preparation costs to $832 million, meaning that in the absolute worst case Boeing would face costs equivalent to roughly 20 aircraft to start a strong burn-off in liabilities going into the billions of dollars. More painful would be the impact of the current market environment that Boeing and Airbus both face, but that Boeing faces for a bigger quantity of aircraft.

*Join The Aerospace Forum today and get a 35% discount* 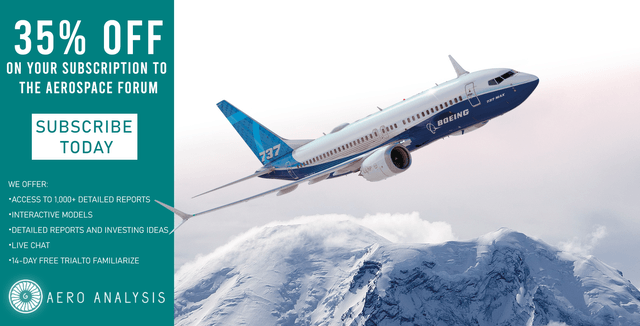