I was once a big fan of BJ’s Restaurants (BJRI). The company had a differentiated concept that drove nice average tickets and strong unit volumes, and the stock represented good value. However, the past year or so saw some deterioration in the company’s outlook against its valuation, and the pandemic has only served to exacerbate this condition.

BJ’s, however, has rallied hard in recent weeks, and I think it is egregiously overvalued at this point. 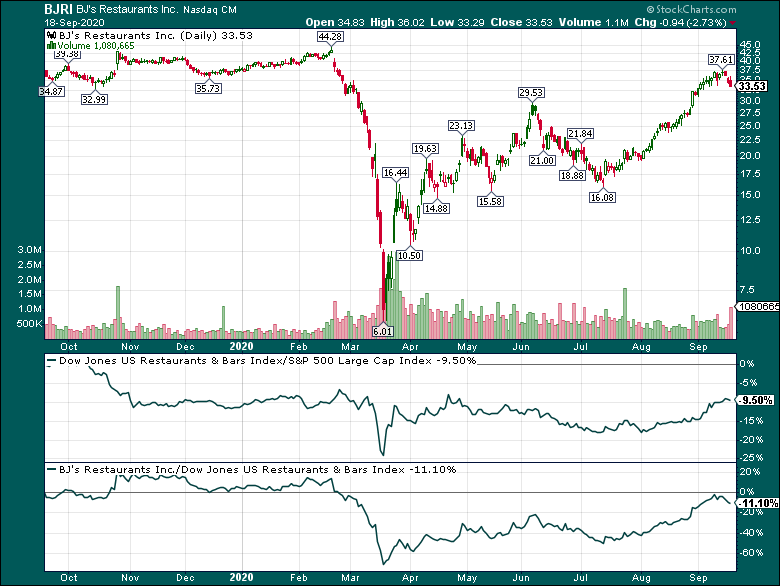 We can see in the middle panel above that restaurants as a group have rallied nicely against the broader market in recent weeks. In the bottom panel, we can see BJ’s has outperformed an outperforming group, which is superb. However, there are enough red flags that I think this outperformance is misplaced, and thus, the stock needs to come down.

BJ’s was, for a long time, a nice grower as it added stores to its base. It competes in the very crowded casual dining space but generates strong average unit volumes on a ~$17 average check. The company’s strategy is to go after all dayparts – with the exception of breakfast – instead of focusing on just lunch or dinner. The company boasts about a quarter of its sales from non-peak meal times, which is part of the reason why its average volumes are in excess of $5 million per store in normal times.

The menu is also enormous, and there is a near-constant flow of new items onto the menu to entice people to come into the stores. This combination has led to the revenue growth you can see below.

Revenue grew nicely in recent years due to new stores, primarily, but given what we can see below, it is quite obvious that BJ’s will have a progressively harder time growing the top line in the coming years than it has in past years.

Below, we have comparable sales since 2013, and results aren’t all that encouraging.

Comparable sales – with the exception of 2018 – have basically oscillated around the flat line for several years, as BJ’s stores have become only very slightly more productive in this time frame. There are countless chains with better same-store sales numbers than this, and I think this is BJ’s biggest Achilles heel; so much of a restaurant’s success is driven by leveraging down operating costs, and yet, BJ’s has been proven completely unable to do this over time. I overlooked it when the store base was growing nicely, but today, pricing in further growth seems quite imprudent.

The other thing is that BJ’s is at risk if there is another wave of shutdowns from the virus. Its menu isn’t exactly takeout-friendly and the whole experience is predicated upon getting people to turn up to the restaurant and sit down. BJ’s has built its business around selling alcohol, dessert and other add-ons that people are much less likely to buy if they are taking food away. Whether people return to normal behavior into 2021 is still up for discussion, but this is a big risk for BJ’s in my view, in a world where takeout-friendly restaurants are winning.

I mentioned restaurants need sales leverage to boost margins, and nowhere can you see that concept in action than in looking at the company’s EBT margins for the past several years.

Even with slightly positive comparable sales, BJ’s has seen its margins deteriorate as it has invested in promotions, marketing, and new menu items. This has caused its margins – which weren’t all that great in the first place – to deteriorate further. With pre-crisis margins of less than 4%, BJ’s was already on thin ice. Now, with what I believe to be a significant comparable sales risk, margins are unlikely to return to 4% anytime soon. That puts a cap on profits, and therefore, the valuation.

Speaking of profits, the outlook there isn’t particularly enticing, either.

EPS has been choppy in recent years as profitability has oscillated while revenue grew. EPS came in just over $2 last year, but given the outlook for BJ’s, I think there is a decent possibility it won’t hit $2 in EPS ever again. With perpetually weak comparable sales, a model that is far from takeout-friendly, and comparable sales risk due to shutdowns and altered consumer behavior, I think BJ’s is in a tough spot.

It isn’t just that, however, as BJ’s has used cash to buy back a huge amount of stock in recent years, which boosts EPS by lowering the share count.

Share repurchases have been mighty for a company with a $747 million market capitalization, but the thing is that weak margins will almost certainly produce less cash, which means this very strong tailwind of past growth will be either severely reduced, or taken away entirely.

Below, we have cash from operations and capex, which are the two main components of free cash flow.

BJ’s has produced rather pedestrian free cash flow in most years as it spends a great deal of its operating cash on things like new stores or menu innovation. With reduced profitability this year and next year – at least – operating cash flows will decline, and thus, free cash flow should as well. That leaves less available to buy back stock and prop up EPS, creating yet another headwind for shareholders.

Overall, while I liked BJ’s concept in the past, I don’t think it fits in a post-COVID world. The concept is based around getting people in the restaurant, and its comparable sales and margins were showing signs of deterioration well before the crisis hit.

At 24 times 2022 earnings, I think BJ’s is priced for way too much growth, with not enough evidence it can actually achieve that growth. For that reason, I see BJ’s recent outperformance as very premature, and I think the stock is a sell.

NASDAQ 100, NIKKEI 225 INDEX OUTLOOK: Nasdaq 100 futures climbed on early Wednesday, rebounding from an immediate support at 11,650 Focus remained on the progress of US stimulus talks, while strong earnings may cushion the […]

© Reuters. A pump jack on a lease owned by Parsley Energy operates in the Permian Basin near Midland By Jennifer Hiller HOUSTON (Reuters) – Pioneer Natural Resources Co (N:) said on Tuesday it would […]