As mentioned in previous reports, the provision of extraordinary fiscal and monetary stimulus measures in response to the novel coronavirus pandemic has served to underpin anti-fiat assets, with the price of Bitcoin surging over 212% from the yearly low (4000) to set a fresh yearly high on August 17 (12490).

Since then however, the notable stabilization of the Federal Reserve’s balance sheet and the prolonged stalemate in US fiscal aid talks seem to have capped the performance of the popular cryptocurrency.

Bipartisan negotiations between House Speaker Nancy Pelosi and Treasury Secretary Steven Mnuchin appear to be going nowhere fast, as Mnuchin warns that “getting something done before the election and executing on that would be difficult”.

Moreover, in the off-chance that a bill is agreed upon there is a distinct possibility that it will be voted-down in the Senate, given Senate Majority Leader Mitch McConnell favours a significantly narrower aid package that will cost roughly $500 billion and has stated that “the speaker insists on an outrageous amount of money”.

Therefore, with both sides of the aisle literally trillions of dollars apart, and only 19 days until the US presidential election, it seems rational to expect that Bitcoin prices will remain capped by key psychological resistance at the $12000 mark in the short-term.

Having said that, recent price action suggests that the market may be looking beyond the upcoming election and could be beginning to price in a Biden presidency, which is expected to bring with it substantial fiscal stimulus if the Senate flips to a Democratic majority.

Get Your Free Introduction To Bitcoin Trading

The marked turn higher in inflation expectations appears to coincide with the former Vice President’s surge in the polls and could be behind the liquidity-sensitive asset’s resilience in the face of fading stimulus hopes.

To that end, although the absence of much-needed fiscal aid may weigh on the price of Bitcoin in the near-term, the growing likelihood of a Biden win in November could see market participants begin to price in a more extensive government support package and in turn put a premium on the liquidity-driven cryptocurrency.

Conversely, further losses could be in the offing if incumbent President Donald Trump begins to claw back lost ground against his Democratic challenger, as is reflected in Bitcoin’s recent 3-day decline on the back of Trump’s nudge higher in the national polls. 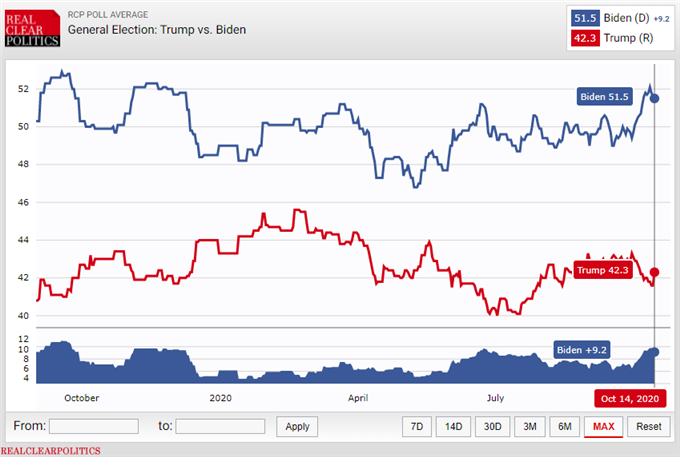 From a technical perspective, Bitcoin seems at risk of a short-term pullback as the RSI swerves away from overbought territory and buyers fail to breach key resistance at the September high (12067).

With the MACD histogram noticeably fading and the trend-defining 50-day moving average (10855) eyeing a cross below its 100-period counterpart, the path of least resistance seems lower.

Inability to press to fresh monthly-highs could encourage would-be sellers, with a break below the 23.6% Fibonacci (11311.8) probably generating a push to test support at the 21-DMA (10941).

That being said, although BTC/USD may pullback in the coming days, a complete shift in trend seems fairly unlikely given price continues to track firmly above all four moving averages.

Therefore, an extended topside push could be in the offing if psychological support at the 11000 mark remains intact, with a daily close above the monthly high needed to validate bullish potential and bring the August high (12490) into focus.