There is one reason that Bitcoin (BTC-USD) was invented: the frustration of one individual due to the monetary policies of governments during the financial crisis of 2008. During that time, governments around the world passed legislation to prop up companies and their respective economies. Simultaneously, central banks were buying up the debt these governments were creating simply by “hitting a button” and in the process creating new money in that very instant.

This is 2020 and there is a global pandemic and a far greater need for stimulus. Economies are reeling around the world. Given the original playbook that ultimately propped up the respective economies, governments are doing the same thing. However, this time, the money creation is far greater in scope and depth. So far $3T of debt has been pushed into the system with a possible $1.5T more to come with a new government administration.

Unlike, say commodities such as gold, there is a fixed amount of Bitcoin that will ever exist – and, for that matter, all cryptocurrencies. With a money supply that is ever expanding, a fixed amount of BTC will necessarily move higher in price. We have been seeing this. I do not think this is going to be a one-way road upwards in the cryptocurrencies, but a steady move higher as the amount of the stimulus works its way into the economy. Nonetheless, this is Bitcoin’s time to shine: Bitcoin is going higher.

Here is a look at the price of BTCUSD on a recent chart:

When I first started touting Bitcoin here on Seeking Alpha in April 2017 we were using the ticker (COIN) to follow the Winklevoss twin’s ETF as BTC-USD was not even recognized yet. The price for BTC at that time was a mere $1k; it is now 15x that price. But, admittedly, that has not been a one-way road.

Little did we know that there would be a global pandemic and the ensuing economic malaise from it. In the beginning of the currency’s existence, we were still running on pure fundamentals carrying over from the first financial crisis that were waning.

It is the money supply that has me looking heavily into becoming an active trader again outside of my initial investment in Bitcoin. I think Bitcoin is going to go through spurts and surges here and there with the eventuality of hitting $50k as its first stop. The culprit that will drive this is the money supply and what the US Government has just done to it.

Here is a look at the Money Supply M2 for the United States:

As mentioned, the financial crisis of 2008 was the straw that broke Satoshi Nakamoto’s back, so to speak, to create a currency that could never be devalued. He, or a group of individuals, created Bitcoin in 2010. Given the amount of money that was just created via the latest stimulus package I can only imagine Mr. Nakamoto’s frustration with the current respective government policies. However, he is said to be holding BTC and likely worth more than Amazon’s Bezos.

Since 2008, the crypto currency has been the hallmark of cryptocurrencies despite all of the various arguments over its management and the subsequent initiation of a few thousand other cryptocurrencies.

This money supply is what should be the key focus. Again, there can only be so many Bitcoins in existence. Period. After that, it is a matter of what value these currencies are offered for. And, with regards of the money supply, since there is a significant dilution factor involved with the creation of money, this is where Bitcoin should push higher.

As inflation works its way throughout the system, the dollar in your pocket buys less and less of just about anything given a set amount of supply. Say, for instance, gold. As the amount of money in the system erodes in value an individual will need more of that money to buy gold.

Throughout ages, gold has been considered a hedge against inflation. Gold could be thought to have a fixed amount. If you want to get more of gold you have to go and mine for it. This costs money, of course, and the input costs such as energy and labor are going to rise as inflation pushes prices higher and higher. This, ultimately pushes the cost of producing more gold higher and higher.

But, with Bitcoin, there are no real input costs, mining notwithstanding. As other costs move higher around the world, Bitcoin will follow suit and move higher.

The fixed amount of coins means that there will be a continued decrease in the relative purchasing price of USD versus all products and commodities. Therefore, by sheer fact that inflation is going higher – driven by the money supply – the price of Bitcoin must go higher. We see the effects of inflation every single day, every single year. The annual inflation rate at roughly 2%, compounded annually, puts a products price up some 50% after 20 years’ time.

But, the virtual tsunami of money that will work its way into the system by fact of the new money that has been created will mean that we will see an ever increasing money supply, and subsequent inflation level. This is not an instantaneous effect; Inflation takes time. However, the instantaneous addition of $3T of new paper into the system makes me wonder what are the immediate effects going to be.

As it stands, there is a significant decline in consumption in the United States and throughout the world. Here is a look at consumption versus incomes here in the US: 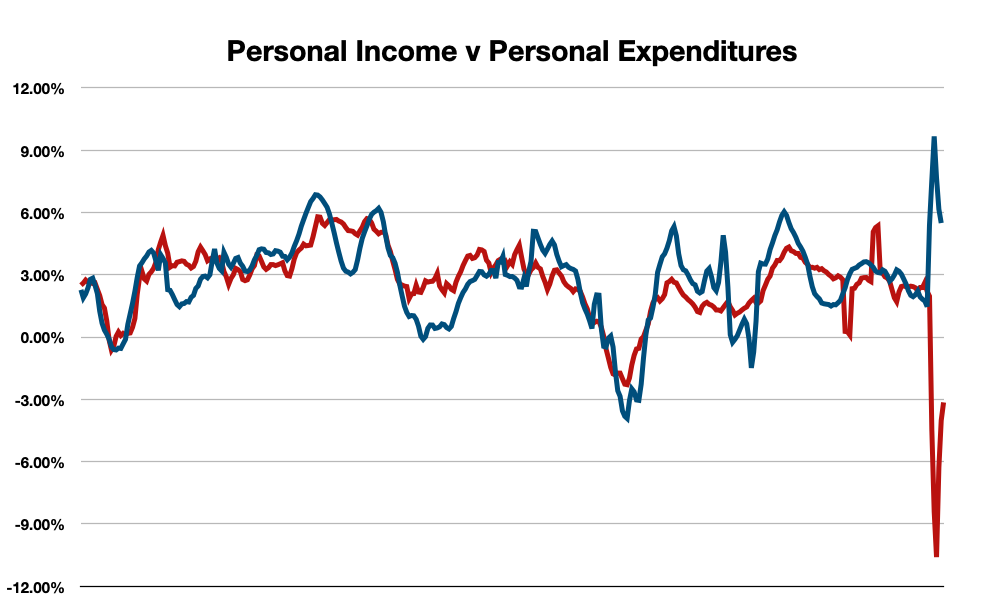 As a macro-economist and statistician, this is my go-to chart when evaluating the economy. As you can see, there is an incredibly strong correlation between incomes and expenditures. As incomes rise/fall, so do expenditures. If you want to know if the economy is expanding or contracting, incomes are where to look first.

What I am wondering at this point is what happens when the two lines start to correlate once again. This is the moment when I believe that inflation has its ability to work its way into the system from all of the money that was created. This is also the point at which I see Bitcoin really beginning to surge higher when all of the inflation works its way into the market.

But, as a cautionary tone, Bitcoin is a bit of an outlier in the sense that it is not “consumed” on a daily basis such as commodities like coffee or oil. So, it may be that Bitcoin ignores inflation entirely. Yet, I can’t help but wonder if since there is going to be such a vast expansion of money here in the United States, at such a sudden moment in time, that this will ultimately push Bitcoin much higher.

I am long Bitcoin for the long haul. However, I have also started to day trade Bitcoin once again as these price movements are a bit easier to trade than the sideways action the currency has seen over the past several years. I believe Bitcoin will go to much higher levels over its lifetime.

I will be watching the money supply and inflation numbers with a great deal of interest. And, I will have my finger on the trigger getting back into day trading in long positions with Bitcoin once again. I am heavily bullish on Bitcoin.

Disclosure: I/we have no positions in any stocks mentioned, but may initiate a long position in BTC-USD over the next 72 hours. I wrote this article myself, and it expresses my own opinions. I am not receiving compensation for it (other than from Seeking Alpha). I have no business relationship with any company whose stock is mentioned in this article.

© Reuters. FILE PHOTO: The Fearless Girl statue is seen as the U.S. flag covers the front facade of the NYSE in New York By Shriya Ramakrishnan and Medha Singh (Reuters) – Wall Street’s main […]