Hot Chili (OTC:HHLKF) is a copper/gold explorer with copper deposits located in the lower level altitudes of Chile. Please note that Hot Chili trades with greater liquidity on the Australian stock exchange under the stock code of HCH.

For many years it was progressing its copper project called Productora and managed to bring the project to the Pre-Feasibility Study (PFS) stage in 2016. Due to the low copper price and Productora requiring a longer mine life to progress the project, the company struggled to gain any traction in the share price. This now looks to have changed. At the beginning of 2019, Hot Chili acquired the Cortadera Project with the plan of adding mine life to Productora. Cortadera was only supposed to have 3 open pits with the hope of adding a few extra years to Productora’s mine life. All of these plans changed in a very big way when Hot Chili identified large copper and gold intercepts at one of Cortadera’s copper deposits called Cuerpo 3. Although there is no resource estimate for Cortadera, the project now looks to be a lot larger than Productora with a very high chance of the proposed processing mill being shifted to Cortadera.

A detailed and informative analyst report was released back in February 2020 by Investment House Argonaut. This report provided important information regarding the potential size of Cortadera’s resource.

In the Argonaut research report, they go on to state:

“Given that HCH has identified a number of potential open pit opportunities within Cortadera, we believe that in the first few years, HCH could mine from several open pits at Cuerpo 1, 2, 3 and Cuerpo 4 and within the high-grade El Fuego deposits. Concurrent with open pit mining, HCH would develop through lower grade mineralisation at Cuerpo 3 to reach the beginning of the mineralised high-grade core (~350m below surface) where we expect that a block caving operation could commence.” 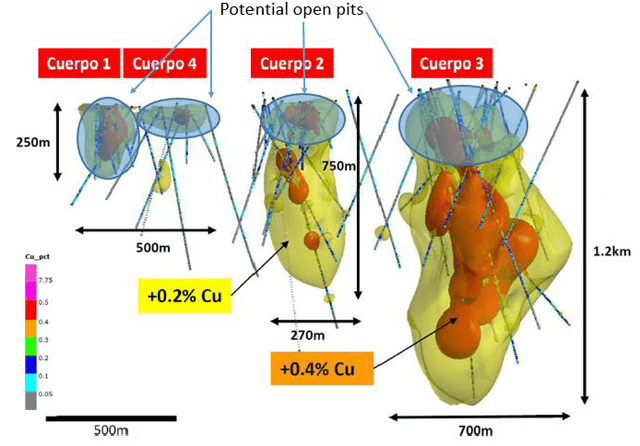 If we were to conservatively estimate that an open pit reserve of around 150 million tonnes could be determined from these Cuerpo deposits at a grade of 0.5% copper and 0.2g/t gold, then this could provide 6 years worth of ore for a 25 million tonne per annum (mtpa) operation. The cash flows that Hot Chili would receive in the first few years of the operation would provide them with enough funds to begin open pit production at Productora and start constructing a possible underground operation at Cuerpo 3. I estimate that the underground segment of the Cuerpo 3 deposit could host a 280 million tonne resource at 0.5% copper and 0.2g/t gold.

In 2016, Hot Chili released a Pre-Feasibility study on the Productora operation. This was before the acquisition of the Cortadera project. A reserve was determined from this project.

The transitional ore and sulphide ore are only able to be put through the proposed processing mill. The copper in the oxide ore are to be extracted by a different process called heap leaching.

It is therefore possible for Productora to provide 150 million tonnes of ore for the Cortadera mill. As you can see from the graph below, although Productora has a reserve of less than 0.5%, the deposit could provide the first 55 million tonnes of ore at a grade above 0.5%. This could be very handy at keeping the feed grade at 0.5% for when open pit mining commences at Cuerpo 3, as this resource could initially be at a grade that is lower than 0.5% copper. 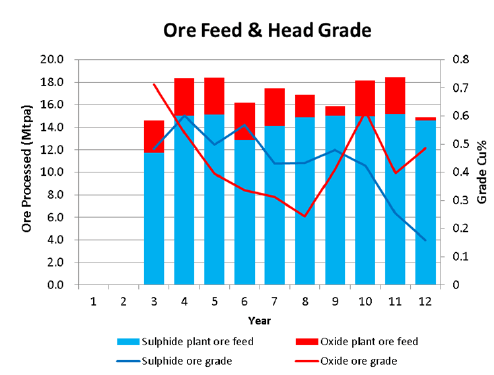 The El Fuego project could also host some small, high grade deposits which could increase the head grade of the mill. The two main prospects are the San Antonio and Valentina projects. Recent announcements have explained the high grade nature of the El Fuego project, however, I’m not expecting very large tonnage from a possible resource (less than 8 million tonnes). Any resource over 1% copper would be a welcome addition for the processing mill, as processing costs would come down per tonne of copper produced.

Understanding how a large underground operation will succeed

As Cuerpo 3’s underground deposit is not considered to be high grade, the only large scale underground mining operation that would make sense to utilize, is block caving. To get an idea of a large scale underground block cave operation, Newcrest Mining’s (OTCPK:NCMGY) most profitable gold/copper operation, Cadia could be a very interesting comparison for Cuerpo 3. On October 15 2019, Newcrest approved the construction of the Cadia expansion project. What stood out to me was that the grade of the copper and gold in their Life of Mine plan was only 0.3% and 0.46g/t. There is a high chance that the grades of Cuerpo 3’s underground deposit could be similar (0.5% copper and 0.2g/t gold).

In the Argonaut research report they stated that there was a possibility that Cuerpo 3’s underground resource could be extracted via block caving, which would contain two lifts, one above the other. The below diagram is a block caving mine plan of the Northparkes copper/gold project in Australia. This provides a rough idea of what a possible block caving operation may look like at Cuerpo 3. 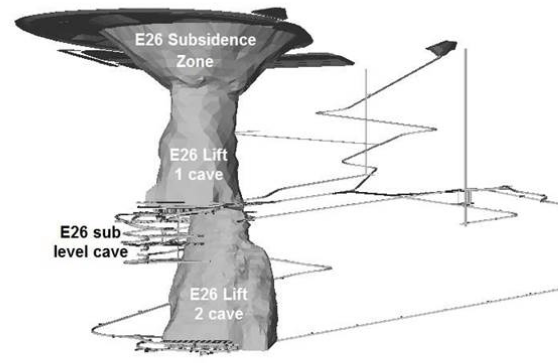 Block caves tend to proceed only when the Net Present Value (NPV) is 1 to 1.3 times the capital cost to construct the underground project. To determine how much a block cave operation would cost, I note the below diagram which gives an idea of the capital and operating costs, comparing open pit and underground operations.

If we were to assume that Cuerpo 3 was able to extract 40,000 tonnes per day, operating costs would be on par with an open pit which had a strip ratio of 2:1 or $10 for every tonne of ore extracted. Please note that this graph was created in 2014 so operating costs may now be higher due to inflation.

The majority of a block cave’s costs (50-60%) are labor costs and power costs. In Hot Chili’s PFS relating to its Productora project, power costs were estimated to be around 6.5 cents kwhr. This is roughly in line with Cadia’s power costs. Labor costs in Chile are also cheaper than labor costs in Australia. When you combine these similarities with similar production rates, operating costs at Cuerpo 3 could be quite similar to Cadia’s estimated $12.14/tonne total operating cost (this includes mining costs, processing costs, infrastructure costs and general and administrative costs).

After considering all of these assumptions, a simple production schedule could be as follows (25 mtpa operation): 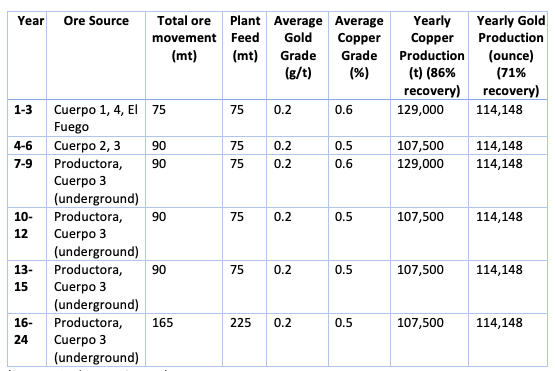 Judging by the above production figures, this operation is possible of becoming a Tier 1 copper/gold operation. This is even without considering Hot Chili’s oxide operation which could add an additional 10,000 tonnes of annual copper cathode to these production figures. Particularly if additional oxide resources are identified at Cortadera.

After taking in to account all of these estimations, the Net Present Value (NPV) of this operation will be much higher than the current Productora NPV estimate (after tax NPV of $220 million) which was released in the PFS. The reason for this is that total operating costs will reduce (as a result of economies of scale), mine life will more than double, copper production will nearly double, gold production will more than triple and general and administrative expenses should reduce as a percentage of tonne of copper produced. Even with an increase in the estimated capital cost to construct the project, I’d be pretty confident that the NPV will be significantly higher. The payback period for the capital outlay of this project could also reduce if an economic high grade reserve was determined at the El Fuego prospect.

I note that Hot Chili has to pay $25 million over 2 installments to finalize the Cortadera acquisition. Hot Chili managed to delay the repayments for a $2 million fee which needs to be paid by 15 July 2020. The first installment of $10 million has now been delayed to July 2021 and the second installment of $15 million has been delayed to July 2022. This gives Hot Chili time to drill out Cortadera and bring out a sizable, decent grade resource. However, further capital raises will be required to develop this resource. The numerous prior capital raises have been quite damaging to the share price due to the significant increase of shares on issue. Although shareholder dilutive, a capital raising will be required to pay for the upcoming $2 million fee and for further drilling of Cortadera and El Fuego, to bring out an indicated resource and complete a scoping study for these two projects. If this results in a significantly higher share price, raising further capital would not be as dilutive to existing shareholders and they may be capable of paying the $25 million themselves.

If a higher share price does not come to fruition, Hot Chili should sell an interest in these projects like what they did with the Productora project. Compania Minera del Pacifico S.A. (CMP) has a 20% stake in Productora. On 18th May 2016, CMP purchased a 2.5% interest in Productora for $1.5 million, which took their interest in the project to 20%. If we were to extrapolate this 2.5% interest in to a 20% interest, this equates to $12 million for Productora. I think it would be fair to assume that Cortadera is at least three times more valuable than Productora, when you consider the potential larger tonnage resource, higher gold grade and the larger possible production rate. Cortadera is also highly prospective for additional deposits. Therefore, $36 million would be a fair price to purchase a 20% stake in the project. These funds could be used to pay off the $25 million still owing to Cortadera and progress an updated PFS incorporating the Cortadera and El Fuego projects in to a mine plan.

To determine a possible valuation for a deposit that is at the PFS and DFS stages, I note a research report conducted by Ord Minnett. They went through a number of base metal companies with single asset projects and provided all of the important metrics relating to each project. 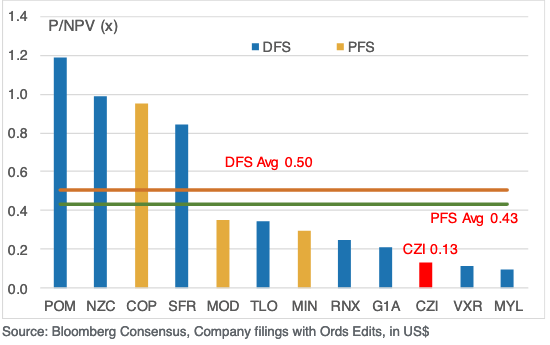 When we relate this above analysis to Hot Chili, if the company is able to demonstrate a project which has a mine life over 15 years, an IRR of around 20%, an NPV which is close to their initial construction costs, and copper production of around 100,000 tonnes per year at C1 cash costs of around $1 per pound (after gold credits), larger base metal companies with a strong balance sheet will be very interested in a project of this scale.

Hot Chili’s projects have all of the foundations of a significant copper/gold producer. With management owning a very large shareholding in the company and a market capitalization of only $20 million, I see significant upside for a company trading this cheaply. Although early days, further drilling will de-risk the project and hopefully grow this resource further.

Disclosure: I am/we are long HHLKF. I wrote this article myself, and it expresses my own opinions. I am not receiving compensation for it (other than from Seeking Alpha). I have no business relationship with any company whose stock is mentioned in this article.