In the wake of the Phase I trade deal, we are turning incrementally positive on Baidu (BIDU), as we expect a slight improvement in the macro environment which should be accretive to the general ad market. With an improving macro backdrop, the key risk associated with BIDU is the competitive dynamic, where we could see further pressure on ad pricing and engagement churn to other internet properties such as short-form videos.

The trade war has no doubt negatively impacted the Chinese macro environment that resulted in a pullback in overall ad spending. Given that Phase I of the trade deal is largely signed, we expect an incremental recovery in the macro environment, which should be positive for BIDU stock. Notably, search advertising is likely to stabilize due to improving demand from key verticals such as gaming, ecommerce, and education, while we expect auto and financials will likely remain a drag.

However, we are cautious about the competitive outlook given that much of the supply and pricing is determined by a handful of private companies, most notably ByteDance. Despite the minor easing in the competitive dynamic late last year, we note that there is always the potential for a sudden influx of ad inventories that could still pressure ad pricing. Our view is that BIDU is not in the driver’s seat when it comes to pricing, and an influx of inventory can easily resurface should ByteDance choose to do so to compete against BIDU.

The current valuation of 20x 2020E consensus P/E is well below the internet average of 25-27x. With revenue growing at ~5-7% this year and earnings growing at 26% y/y, the current multiple may appear to be rich. However, we believe that a gradual recovery of the ad market could drive a reacceleration in revenue in the 2H20, which should be supportive of the current multiple. Ultimately, we believe that BIDU should trade at least on par with the industry average of 26x given its dominant market share in search and ownership of a considerable amount of traffic in China.

We are updating our valuation on BIDU with a new price target of $167, a 20% implied upside from the current level.

We value BIDU based on SOTP analysis of its core business plus investments.

We classify the company’s core business into core search, cloud, and iQiyi. Our valuation of the core search business is $136/share based on 5x P/S and a 30x P/E target multiple. Given that the Chinese internet sector trades between 25x and 30x P/E, we believe that BIDU’s core search should trade at the high-end of the range given the ad market recovery. We value BIDU cloud at 3x P/S given its smaller scale relative to Alibaba Cloud (BABA), but still higher than rival Tencent Cloud (OTCPK:TCEHY). Our iQiyi valuation is in line with peers at 2.5x forward P/S. Adding these components together gets us $166/share for the core business.

The investment side consists of Ctrip and Didi. We value the investments of Ctrip at the current market cap to derive a value of $8.25/share, while the Didi valuation is based on the last investment round. This resulted in ~$12/share investment holding value for BIDU.

We applied a 15% holdco discount compared with the typical 10% that is applied by the sell-side analysts, as we do not believe that BIDU has significant influence over its investments. The result is $167/share, or 20% upside from the current level.

However, it is worth noting that our valuation and assumptions for BIDU are based on the gradual recovery of the ad market, but there are still several fundamental challenges that the company is facing, namely:

BIDU’s China focus business model. Given that Chinese internet companies can no longer rely on user traffic for revenue growth, the next growth area is overseas expansion. Alibaba is moving to ASEAN, while Tencent is leveraging its mobile game portfolio. A disruptor like TikTok is already a hit in the overseas market. Globalization for the Chinese companies is an inevitable path, but BIDU’s China-focused business model and product do not position the company for this trend.

Competition from TikTok and Kuaishou is another issue in that investors should be mindful of the engagement shift towards short video away from some of BIDU’s properties such as iQiyi and literature apps. The potential of these disruptors which has around 300m-400m DAUs, to pressure the ad market again with surplus inventory is another risk to the company’s revenue growth outlook. BIDU finished Q3 with only 189 DAUs, and its DAU net adds was the lowest since the company started disclosing this metric. The DAU growth deceleration could still point to a structural weakness in the company’s ecosystem, in our view. 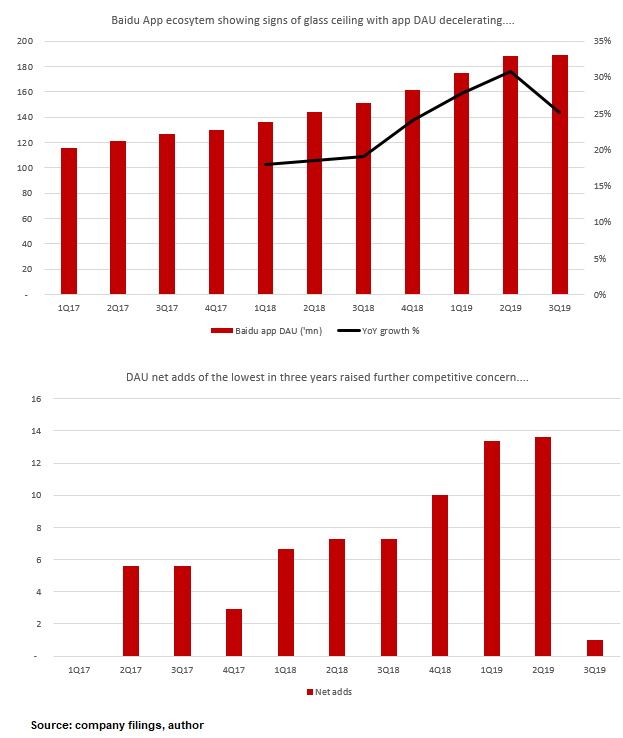 BIDU’s revenue is derived from advertising spending from several key sectors. In the most recent quarter, the top sectors were education, retail, and services, while healthcare, financial services, franchising, and autos were relatively weak due to the soft macro.

For the education sector, we expect ad spending to continue, although momentum is likely to be light given the 50% growth from the prior year. The deceleration is mostly due to fewer overseas enrollment due to the visa complications for secondary education.

However, this softness could potentially be offset by strength in other sectors such as gaming and ecommerce. We note that the resumption of the game license approval should kickstart ad spend on games as more titles come to the market and game developers and publishers compete for gamers’ mindshare. We note that during the license freeze period, both Tencent and NetEase (NTES) saw sales and marketing decline by around 25% y/y, so the resumption of the license approval will likely attract more ad dollar.

For ecommerce, the ad environment will remain competitive as Alibaba (BABA), JD.com (JD) and Pinduoduo (PDD) compete for user traffic. A few scenarios are playing out. First, both BABA and JD are spending heavily to acquire users in the lower-tier cities to compete against PDD. Second, PDD is moving upstream to the upper-tier cities and income groups to gain brand recognition and user stickiness. All these players are maintaining an aggressive sales and marketing strategy in acquiring traffic both in the higher-tier cities (such as the case with PDD) as well as lower-tier ones (such as the case with BABA and JD making inroads with lower-income consumers). With ecommerce players spending ads across BIDU properties, we believe that the company is likely to become a beneficiary of this trend.

On the other hand, we believe that the financial and the auto advertising are likely to remain weak given their respective challenges. We note that many online lenders, particularly the P2P players, leveraged BIDU as a marketing platform for user acquisition. Given the recent downsizing of the P2P sector, BIDU has lost a significant portion of fintech ad spending. Additionally, the auto sector in China has also been weak due to the macro slowdown, so naturally, automakers have been cutting back on ad spending. These two sectors could see ongoing weakness, and the consensus expects a gradual recovery as we approach the end of 2020.

All in all, the market will focus on BIDU’s core growth, which company management has forecasted between flat to 6% y/y growth. However, it is worth reminding investors that when looking at core search, it is reasonable to include newsfeed and exclude iQiyi. If we are to do this, the core search does not show a material stabilization last quarter. 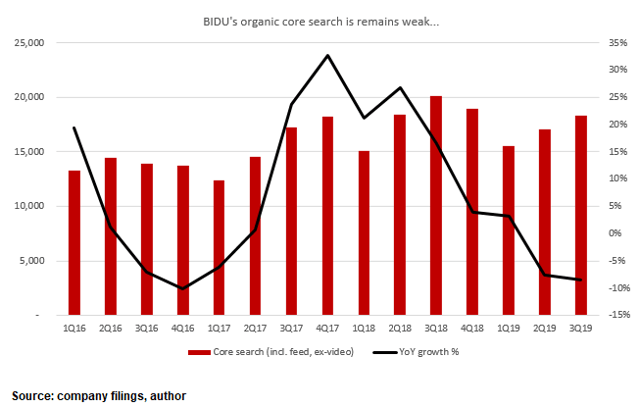 That said, any sign of stabilization in core search growth in the upcoming quarter will likely be perceived positively by investors, and that could send shares higher.

We forecast 3% y/y core search growth in 2020, with over half of the growth coming in during the second half, as ad spending in the ecommerce, education and the video game sector picks up after Chinese New Year in late Q1.

For 2021, we are modeling a 10% core search growth as the ad spending from the financial sector gradually recovers following the clean-up of the P2P sector. We note that the regulators’ effort of removing the noncompliant platforms is working, and a number of the remaining platforms have been granted or are applying for micro-credit licenses which the regulators support. As the entire sector becomes more compliant, ad spending will likely recover given there are over 600 million Chinese consumers without proper access to bank credit and who rely on online lenders such as LexinFintech (LX), 360 Finance (QFIN) and Ant Financial for consumer credit. Additionally, we believe that the eventual recovery of the Chinese auto sector could add incrementally to our 2021E estimate. 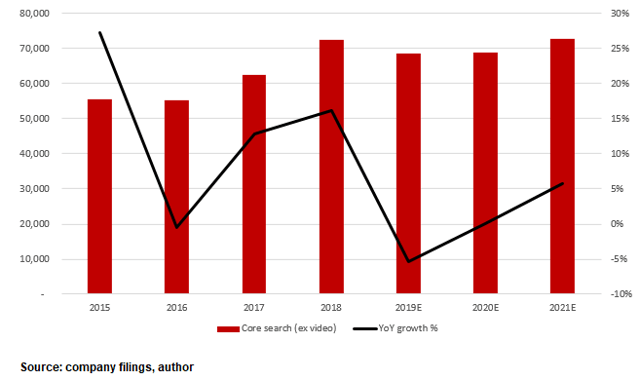 We had the opportunity to meet with BIDU management in Singapore in late November and were able to get some insights into the ecosystem and AI.

Overall, management is confident about the competitiveness of the search business and cited that competitors’ user base growth is seeing some deceleration, which means there is less pressure on ad pricing. Our view is that no business is insurmountable, and our understanding is that ByteDance is moving aggressively into search to decouple BIDU’s status as the search leader. While many investors will argue that both Tencent and BABA have moved into the search but have failed to impact BIDU, we believe that ByteDance could have a clear shot given its ambition to capture this segment of the internet as well as a clear need for a better search engine in China.

In conclusion, we are becoming incrementally more positive on BIDU shares on the back of the ad market recovery following Phase I of the trade deal, driven by strength in gaming, education, and ecommerce, while the long-term recovery in ad spending in the financial and auto sectors could be supportive of the company’s revenue growth in a two-year time frame. However, we stress that competition and market maturity remain some of the key risks that BIDU is facing – something that investors should not ignore.