The Australian Dollar is like all other major traded assets in thrall to the ups and downs of the coronavirus story. It’s likely to remain so in the week ahead, although there are a couple of important domestic data points which will also offer the prospect of major market moves of their own.

The currency perked up in the past week when investors thought the infection rate might be slowing, only to struggle when reports showed cases surging in China’s Hubei province thanks to new diagnosis methods. There are signs however that Australian markets have a degree of underlying resilience and that even this serious contagion has not yet quite erased the optimism with which growth-correlated currencies like the Aussie started the year.

AUD/USD has managed a clear bounce from its recent lows even though sentiment clearly remains fragile.

Moreover, worries about Chinese demand have already hit commodity prices, and with Australia as a major supplier, the Australian Dollar faces clear headwinds, exacerbated by expectations that domestic interest rates will head further down yet from their current record lows.

Can Full-Time Job Creation Bounce Back?

The markets might get a big clue about that on Thursday when official Australian employment data for January are due. December saw a major rise in the headline job creation of nearly 30,000. That was well ahead of expectations. However, impressive though they were, those gains were confined entirely to the part-time sector with full time roles contracting. Expect this split to be watched very closely when the numbers are released.

The minutes of February 4’s monetary policy meeting of the Reserve Bank of Australia are coming up on Tuesday. The Official Cash Rate remained on hold at 0.75% back then, and Governor Philip Lowe has since struck a relatively upbeat note on economic prospects. The minutes are likely to back this up, but investors may want to make sure there are no new angles.

All up its unlikely that even relatively upbeat domestic data are going to keep traders from virus-headline watching for very long. That makes a macro forecast extremely tricky, but assuming no dramatic ramp-up of infection rates the Aussie may be able to hang on to its recent modest gains.

It’s a neutral call this week. 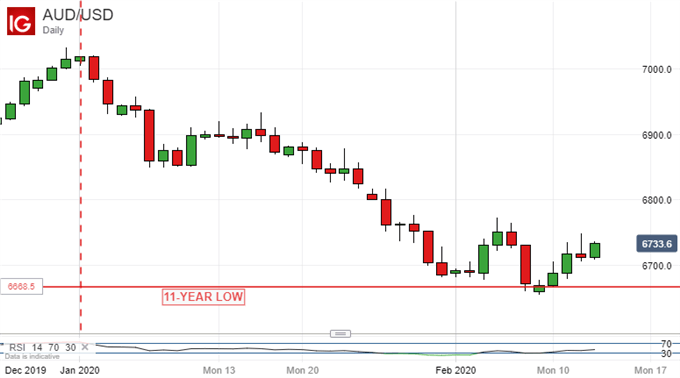 BoC Hikes by 50 bps in Potentially its Final Hike The Bank of Canada’s Governing Council voted to raise the overnight rate by 50 basis points to 4.25%, where the rate could remain. The Bank […]

© Reuters. Roku (ROKU) to seen an inflection in H1 2023 – Oppenheimer By Sam Boughedda In a note to clients on Wednesday, Oppenheimer analysts said they believe Roku (NASDAQ:) shares will see an inflection […]