AUD/USD reversed course after taking out the 2021 low (0.6993) in January. The exchange rate traded above the 50-Week SMA for the first time since July after clearing the yearly opening range in March. AUD/USD may continue to retrace the decline from last year as the exchange rate is on the cusp of testing the October high (0.7556), but the diverging paths for monetary policy may curb the bullish price action. The Federal Reserve looks to implement a series of rate hikes over the coming months, while the Reserve Bank of Australia (RBA) remains in no rush to switch gears.

As a result, the advance from the yearly low (0.6968) may turn out to be a correction as the 50-Week SMA continues to reflect a negative slope. The exchange rate may attempt to further retrace the decline from the 2021 high (0.8007), if it manages to penetrate the former support zone around the October high (0.7556). 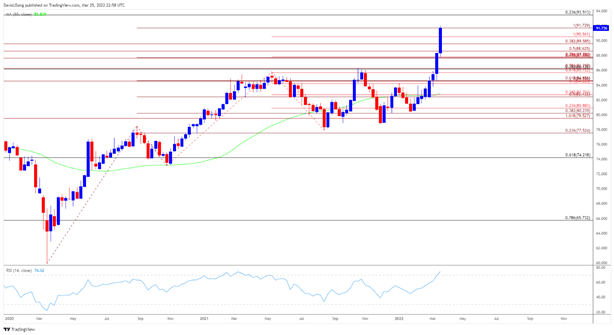 AUD/JPY trades at its highest level since 2015 after clearing the yearly opening range in March, with the eight-week rally pushing the Relative Strength Index (RSI) into overbought territory for the first time since last year. The bullish momentum underlying AUD/JPY is likely to persist as long as the RSI holds above 70, with a move above the August 2015 high (92.69) opening up the 93.50 (23.6% retracement) region. However, AUD/JPY may continue to retrace the decline from the 2015 high (97.65) amid the broad based weakness in the Japanese Yen, but the exchange rate may fall back towards the former resistance zone around the October high (86.25) once the RSI falls from overbought territory to test for support.