The Australian Dollar has returned to eleven-year lows against its US big brother as worries about the economic impact of the coronavirus continue to weigh on all such growth-correlated assets. The coming week offers no first-tier Australian economic data, and no commentary from the Reserve Bank of Australia.

This lack will probably leave the currency in the grip of global risk appetite with clear focus on the contagion’s spread.

There remains some hope that the overall economic drag will be short lived, but admissions by the likes of Apple that problems with Chinese supply chains as a result of measures to try and halt the virus is very likely to keep markets on the defensive.

Australia is of course the key supplier of raw materials to China, so any economic problem for the world’s second largest economy must eventually become a hurdle for Australia, as the RBA itself has conceded.

The Australian Dollar’s bull case is also undermined by futures markets’ take that record-low Australian interest rates are likely to go lower yet. A quarter-percentage-point reduction in the 0.75% Official Cash Rate remains priced in by September this year, with the past week’s news of a surprise uptick in the jobless rate only likely to reinforce this view. Full-time job creation was in fact very strong in January, returning to form after a weak December. but the RBA’s focus on that unemployment rate blunted the impact of that data point.

Assuming that the coronavirus story doesn’t worsen then there may be those in the market who feel that the Australian Dollar has been punished enough this year, even if they don’t feel any urgent need to bid it higher. 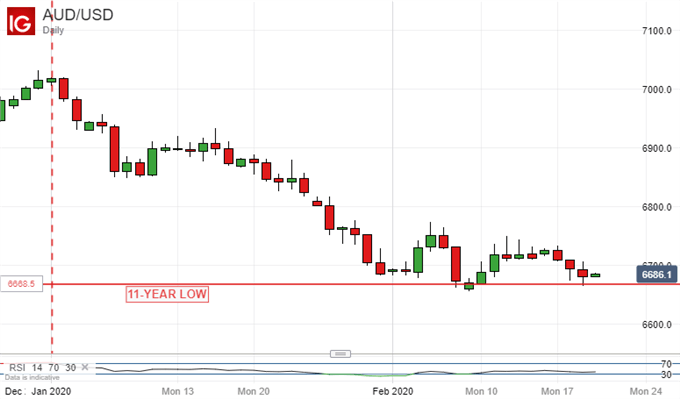 On the basis of that assumption it’s a neutral call this week, with at least one eye on the admittedly unpredictable headlines.

Whether you are new to trading or an old hand DailyFX has plenty of resources to help you. There is our trading sentiment indicator which shows you live how IG clients are positioned right now. We also hold educational and analytical webinars and offer trading guides, with one specifically aimed at those new to foreign exchange markets. There is also a Bitcoin guide. Be sure to make the most of them all. They were written by our seasoned trading experts and they’re all free.