The Australian Dollar slipped a little on Monday as a key measure of Chinese manufacturing output beat expectations but dropped to a five-month low nevertheless.

January’s Purchasing Managers Index from media group Caixn came in at 51.1, just a hair above the 51.0 print expected but below December’s 51.5. In the logic of PMI numbers any print above 50 signifies expansion for the sector, so this series remains in the green from that angle. However, this was also the lowest reading since August 2019.

Caixin’s indicator tracks China’s smaller, privately-held firms’ performance and acts as a compliment to the official PMI series released earlier. There large, state-linked companies dominate. It came in at exactly 50 for January and, with the Caixin data, add to the perception that Chinese growth remains tepid at best as the economy heads into 2020, with the coronavirus outbreak likely to act as a considerable break on growth ahead, even if its consequences do fall short of some more dire predictions.

The Australian Dollar can act as the markets’ favourite liquid China proxy thanks to Australia’s export links to the world’s second-largest economy. It did so to some extent on Monday, retreating a little after the numbers. Chinese stock markets plunged early, in a delayed reaction to the outbreak which came as that country celebrated its extended new year break.

The Aussoe has already come under broad pressure as the viral outbreak magnified a general retreat from growth sensitive assets as 2020 got under way. Such risk correlated assets may now be stabilizing a little after very sharp falls, but they will remain vulnerable to virus news headlines. 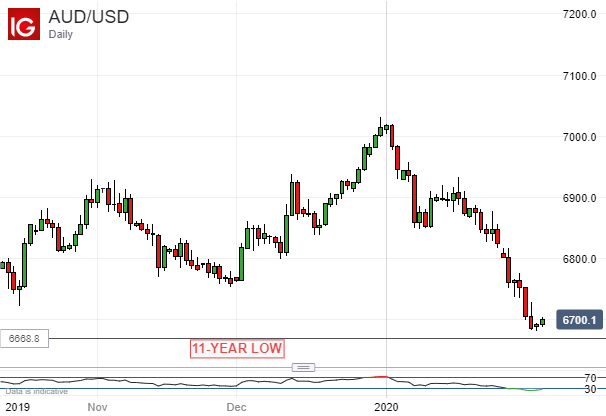 The market is also looking to the Reserve Bank of Australia’s first monetary policy decision of the year. That’s coming up on Tuesday with the chances of any reduction in the record low 0.75% Official Cash Rate judged to have receded quite markedly in the face of quite upbeat employment and inflation headlines.

In fact, there were unsettling details behind both encouraging headlines, with part-time job creation utterly dominant and underlying pricing power utterly absent. Even so, the markets believe that the Australian economy has done enough to put off lower interest rates until at least April, according to a survey from Reuters.