Israeli-based telecommunication equipment company AudioCodes (NASDAQ:AUDC) probably isn’t on your radar, but perhaps it should be. The company designs, develops, and sells voice over IP (VOIP), converged VoIP, and data networking solutions and products to clients worldwide. The company’s products include IP phones, session border controllers (SBCs), media gateways, multi-service business routers, huddle room solutions, managed IP phones, and survivable branch appliances. The company was incorporated in 1992 and is headquartered in Lod, Israel. Perhaps most importantly, AudioCodes is set to report fourth-quarter earnings results before the open on January 28.

AudioCodes has been on my radar since last fall. In fact, I recommended to subscribers of the Hedged Alpha Strategy on October 22. The stock was trading just over $19 at the time, and in the hour following the recommendation, the average price was $19.12. The stock has performed admirably since then and is now trading around $28. I did recommend closing half of the trade on November 26 after the stock had gained 20% in just over a month.

The reason AudioCodes was on my radar was its earnings and revenue growth. Over the last three years, the company has seen earnings grow at a rate of 55% per year while revenue has grown by 11% per year. In the third quarter, earnings were up 26% and revenue increased by 15%. Analysts expect earnings to grow by 35% for 2019 as a whole and revenue is expected to grow by 13.2%.

The company’s management efficiency measurements are good, but not great. The return on equity is at 21.4% and the profit margin is at 11.8%.

Even though the management efficiency measurements are only average, I felt the strong earnings growth and revenue growth warranted adding the stock to the portfolio.

In terms of the technical analysis, there were several things that got my attention back in October. The stock was moving higher with a trend channel defining the different cycles within the overall trend. It was near the lower rail of the channel at the time and it looked like it was ready to bounce. I also took note of the position of the stochastic indicators and how they were in a similar place as they were in May. That was right before the stock rallied for several months.

The chart above is the original one that I sent to subscribers with the blue arrow marking our entry point. I took the liberty of extending the upper rail out to the right and the low in early December and the low in early January both came right down to the former upper rail. This could be a case where the stock has shifted to another level and that former upper rail will now act as support on the next pullback.

Flying Below the Radar

Normally I look for stocks with some form of negative sentiment-below average analysts’ ratings, a high short interest ratio, or a high put/call ratio. This wasn’t really the case for AudioCodes. In its case, there was very little attention being paid to the stock back in October and that hasn’t changed. There are only two analysts with ratings on the stock and they both have it rated as a “buy”. 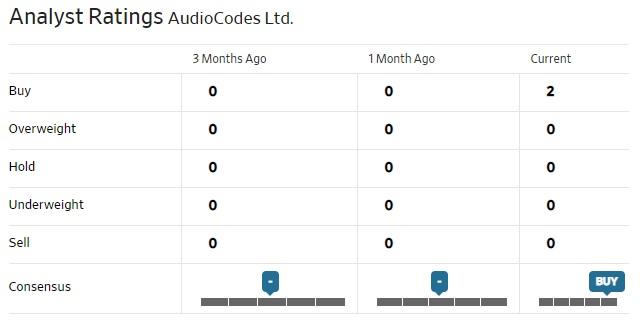 The short interest ratio is currently at 0.65. The Nasdaq site lists it at 1.0, but it doesn’t calculate the ratios under 1.0 to the exact decimal point. Under normal circumstances such a low short interest ratio would be a concern, but once again, I think this is a case of the stock flying below the radar of short sellers. I am a little concerned about the drop in trading volume as it could be a sign that the rally has run its course. 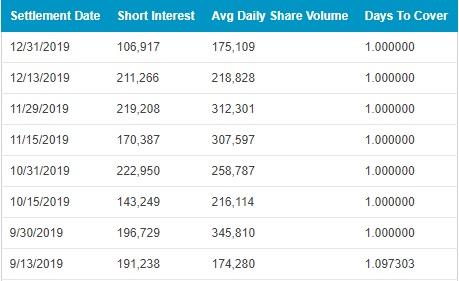 The put/call ratio is extremely low at 0.48. This is well below the average put/call ratio and a sign of optimism from the options crowd. There are 6,478 puts open and 13,427 calls open at this time. To be honest, I was very surprised at how many contracts were in play on AudioCodes. The total open interest, puts and calls, represents 1.99 million shares of stock and the stock only trades 175K shares per day. This means the options that are open represent 11.4 days of average trading volume and that is unusually high.

It is worth noting that the put/call ratio was at 0.53 back on October 29 when AudioCodes last reported earnings. Even though the sentiment was rather bullish, the stock gapped higher after the earnings report three months ago.

My Overall Take on AudioCodes

I am still bullish on AudioCodes for the long term. I am a little concerned about the overbought levels and wouldn’t necessarily recommend jumping into the stock at this time. Because I recommended it in the $19 area and took 20% profits on the first half already, I am keeping the position open at this time. The second half of the trade is sitting at a gain of around 46% so we can ride out a small pullback if it happens.

If the stock were to pullback around 10%, this would put the stock near the former upper rail and as I mentioned before that could be a new support level. It is also worth noting that the 13-week moving average is currently at $24.46. The stock rallied right along the 13-week when it was in the trend channel and it could be a key support level as well.

AudioCodes has beaten its earnings estimates in each of the last four quarters. If it were to beat again, we could see another spike in the stock price, but given the overbought readings we might not see as big of a spike as what we saw in October and July.

If you are looking to buy AudioCodes, I would look to get in on a pullback that brought the stock below $25.

Additional disclosure: AudioCodes is a recommended holding in the Hedged Alpha Strategy.