The Aussie dollar has so far been a big winner in the currency market in 2020, witnessing a strong rise against the greenback.

Even in spite of my prior apprehension that the currency would rise further – owing to a potential escalation of trade tensions between the US and China – the AUD/USD has continued to see a strong trend upwards: 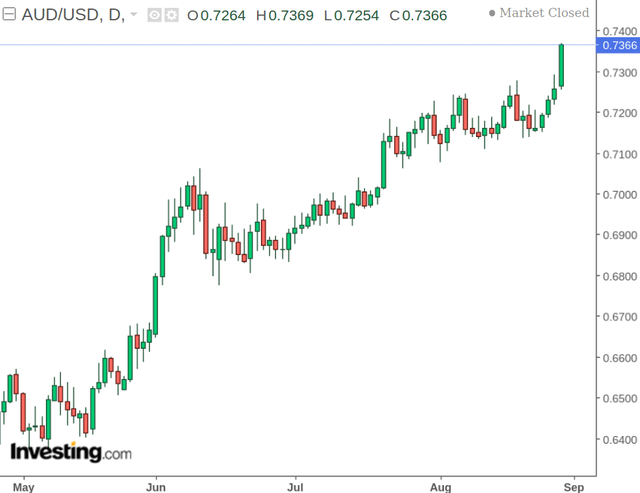 Since the coronavirus outbreak became a pandemic in March, the Aussie dollar has seen strength on the basis that Australia had seen far fewer cases than many other countries and was perceived to have more control over the spread of the virus.

The Reserve Bank of Australia decided to keep the case rate at 0.25% earlier this month, taking the view that the current set of stimulus measures were having the intended effect in terms of limiting economic damage from COVID-19. The fact that the RBA has not had to drop rates further in light of the economic downturn appears to have sent a positive signal to the broader market, and the currency continued to rise in August accordingly.

As far as concerns over trade disputes between Australia and China, this has not shown signs of abating. Most recently, a major potential acquisition of the Australian drinks business Lion Dairy by China Mengniu Dairy Company Limited (OTCPK:CIADY) was halted after the Australian government reportedly voiced opposition to such a deal. Additionally, China has also called for an anti-dumping probe into Australian wine imports. In this regard, trade tensions between the two countries do not show signs of abating.

In spite of this, the currency continues to rise. Due to the nature of COVID-19 and the associated travel restrictions, global trade has taken a strong hit in any case. In this regard, markets appear to be prioritising the country’s ability to control the spread of the virus at this time and ultimately reignite the domestic economy.

This is why we have seen a strong fall in the U.S. dollar of late, given that this country currently leads the world in terms of number of deaths from the virus.

For instance, when we compare the AUD/USD with the AUD/EUR, we see that growth in the currency since June has been a lot more modest. 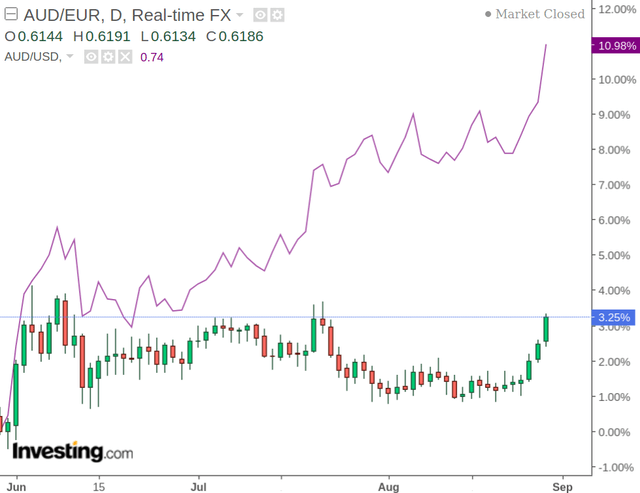 From this standpoint, the markets appear to be pricing currencies using COVID-19 as a strong reference point, given that the control of the virus is integral to kick-starting the economy once more.

As we have seen, the AUD/USD is back up to pre-2018 levels. This is a highly significant climb, and therefore it has become a lot harder to make the argument that the Aussie dollar is “undervalued” at this point.

Moreover, I expect that the currency markets will become increasingly more volatile in the run-up to the U.S. presidential elections in November. As it stands, the United States is perceived to have performed poorly compared to Europe in getting COVID-19 under control. However, a Biden presidency might change the market’s view of COVID-19’s future trajectory in the U.S. For instance, with Joe Biden reportedly set to reverse withdrawal from the World Health Organization “on his first day in office”, this might influence the dollar strength in the interim.

Granted, markets will take a closer view on the number of cases first and foremost as opposed to proposed policy changes, but when COVID-19 shows signs of eventually slowing in the United States, we could see a significant rebound in the dollar and a corresponding fall in the Aussie dollar.

On the other hand, COVID-19 is not necessarily the only catalyst for a rise in the AUD. Strong iron ore demand has continued throughout the pandemic, and this has also contributed to a rise in the currency. Moreover, in spite of trade tensions between Australia and China, steel production is up sharply in China as the country attempts to reinvigorate its economy. As one of Australia’s major exports, I do not see a particular risk of trade tensions harming iron ore demand from this standpoint.

To conclude, while growth in the AUD/USD might moderate from a technical standpoint going forward, I still continue to see upside for the currency given that COVID-19 still remains relatively controlled in Australia in spite of a recent rise in cases, along with continued demand for iron ore.

Mobile gaming was in the VC spotlight last week, led by the $100M Series A raise by potential Zynga (NASDAQ:ZNGA) competitor Playco, which came out of stealth with a $1B valuation in a round led […]