69 DAYS UNTIL THE US PRESIDENTIAL ELECTION

The general election is now 69 days away, and President Donald Trump is no closer to narrowing the gap between him and Democratic candidate Joe Biden. The recently-concluded three-day DNC saw Biden’s net favorability climb higher. Mr. Trump has not yet seen a similar uptick in his figures so far, thouugh the upcoming two days could see a shift in the President’s support.

The first night of the Republican National Convention included well-known figures like South Carolina Governor and Ambassador to the UN Nikki Haley, Donald Trump Jr. and the President himself. Commentary from the event reflected broad support for Mr. Trump as well as critiques of the Democratic party and its nominee. Read more about why the RNC’s lineup this year breaks convention and why it matters.

The Biden campaign is taking aim at Secretary of State Mike Pompeo who is scheduled to speak on Tuesday night, though not in his official capacity as aSenate-confirmed presidential appointee. Mr. Pompeo is expected to speak on the achievements of foreign policy under the current administration which could include hints at what outward-facing policy would look like under another 4-year Trump presidency.

Concern about the tone and of the Secretary of State could push the US Dollar higher at the expense of sentiment-sensitive currencies like the Australian Dollar. The speech is coming at a time when AUD/USD is hovering below the second layer of a two-tiered inflection range between 0.7181 and 0.7206. The lack of upside follow-through suggests an underlying hesitation to climb higher. Perhaps greater political clarity is the right catalyst to push it higher. 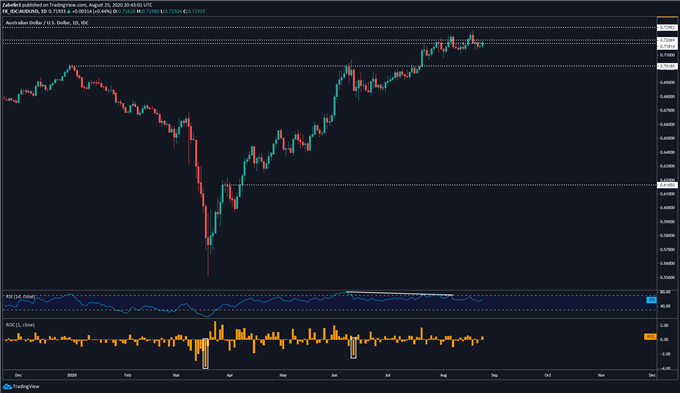