Renewed lockdown measures from France and Germany had tipped risk sentiment over the edge, prompting a sea of red across the board. In turn, high-beta currencies such as the Australian Dollar and New Zealand Dollar had been notable underperformers. That said, what has gained my interest in recent sessions has been the continued move lower in AUD/NZD to 1.0600, which had partly stemmed from the fresh rhetoric from the RBA over imminent easing at next week’s monetary policy meeting.

However, we must not forget that the RBNZ is also quickly approaching (scheduled for Nov 11th) and while the RBNZ are not expected to ease further in terms of the OCR at the November meeting, they are expected to move into negative territory in the first half of 2021. Reminder, the central bank’s guidance on the OCR in March had been that they will not lower rates for a year. With that in mind, in light of the softer inflation data relative to the central banks expectations, the RBNZ could potentially loosen this guidance to signal a move in February. As it stands, money markets are pricing negative rates from the April 2021 meeting.

AUD/NZD Looking Increasingly Supportive as RBA Easing is Priced In

The drop in AUD/NZD would suggest that RBA easing has largely been priced and while the risk off sentiment has added fuel to the downside. The outlook for the cross is starting to look increasingly supportive from 1.06 with the RBNZ looking to keep the Kiwi on the backfoot, while rate differentials are also remain AUD positive. That said, it would be prudent to hold back until after the US election dust settles. 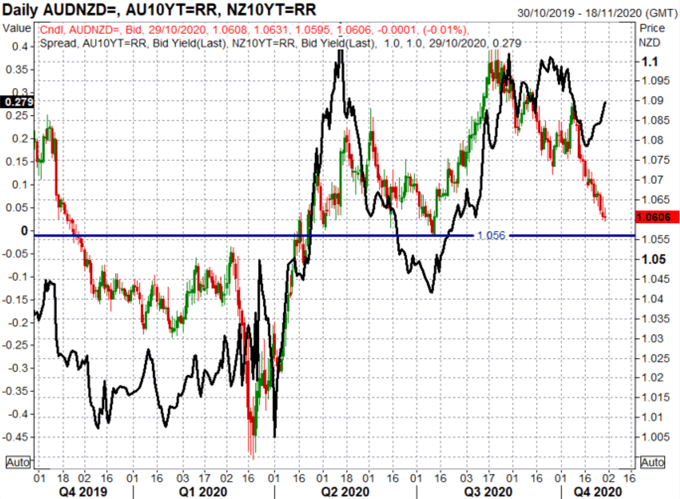 © Reuters By Christiana Sciaudone Investing.com — What kind of an emerging markets index doesn’t include China or Russia?  Not a mainstream one, that’s for sure. The Life + Liberty Freedom 100 Emerging Markets index […]