For most of the financial industry, but especially the mortgage REIT sector, the end of the first quarter was an absolute nightmare. Credit markets began to freeze up, and even though the Federal Reserve had lowered the Fed funds rate, everywhere else rates began to spike.

Even though the Treasuries market is supposed to be the most liquid market in the world, problems began to arise. Reuters used the phrase, “The plumbing behind world’s financial markets is creaking.” Within days, headlines claimed the U.S. was headed towards another financial crisis. Across the board, there were calls for the Federal Reserve to do something. And do something they did.

As a whole, Mortgage REITs use leverage in order to increase income. Normally, this is not a problem because they are structured so that interest payments are less than the marginal income received from the borrowing. Think of it working in the same way as your brokerage margin account.

However, the danger comes when your securities begin dropping in value. Let’s say your $20,000 in securities drop by 40% to $12,000. Suddenly, you get a margin call from the broker saying you need to send money, or sell securities. That’s essentially what happened to the Mortgage REIT sector back in March.

Many of these companies had to liquidate assets because of derivative contracts, financing requirements, and changes in collateral values. And, just as those margin calls were coming, it was not easy to find counterparties willing to buy. Hence, the new facilities and expansion of programs by the Federal Reserve.

To get into this in more depth is beyond the scope of this article. Let’s just say that the Federal Reserve saved a number of firms from failure and leave it at that. But, we will look at some of the financial numbers release in the last earnings report before we get to the real problem plaguing this sector right now; an inaccurate presentation of yield.

From the First Quarter Until Now

To say that the first quarter for ARMOUR Residential REIT (ARR) was bloody would be an understatement. The value of agency securities owned by the firm dropped by 76.7%. The amount of cash posted as collateral to counterparties climbed almost four fold, and more than 45% of shareholder equity was wiped out.

Over that time, interest income was substantially the same as the prior year. But the real damage came from the sales the company had to execute as the quarter wound down. Although the company realized a gain on sales of agency securities, an enormous loss was realized on the sale of non-agency securities and on derivatives. As a result, the company reported a net loss of $6.95 per share.

The company had already declared cash distributions for the first quarter and paid $0.17 per share on the common stock on March 27th. But, in a press release dated April 2, 2020, the company stated:

ARMOUR will move to a quarterly dividend on its common stock for the second quarter of 2020. ARMOUR’s Board of Directors will evaluate the Company’s results, financial position, real estate investment trust (“REIT”) tax requirements, and overall market conditions as the quarter progresses. The Company expects to announce its decision regarding the amount of second quarter dividends on common stock in the latter part of June 2020 as well as whether the Company will return to its prior monthly dividend policy.

Finally, in a press release dated May 19, 2020, the company declared the second quarter distribution of $0.09 per share payable June 29th to shareholders of record June 15th. The company also announced a return to the monthly dividend policy starting the third quarter.

This thus brings us to our problem.

This is not a problem sourcing from ARMOUR Residential or management. And, we could point our fingers at brokers, but that wouldn’t be fair either. The problem is how information is be presented, interpreted, and calculated. Specifically, calculations behind the scenes are using quarterly numbers for monthly distributions to present annual yields.

As a result, almost across the board, broker dealers and financial websites are publishing incorrect yield information based on the distribution amount and frequency of ARR stock. Take a look at some of these graphics from publicly available sections of popular websites. 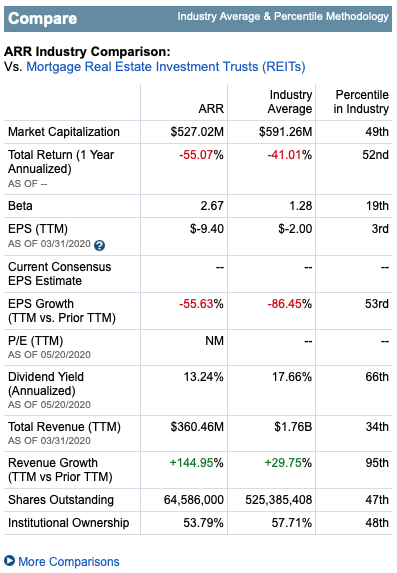 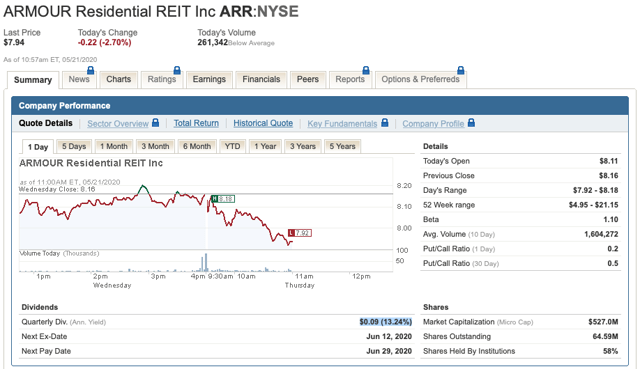 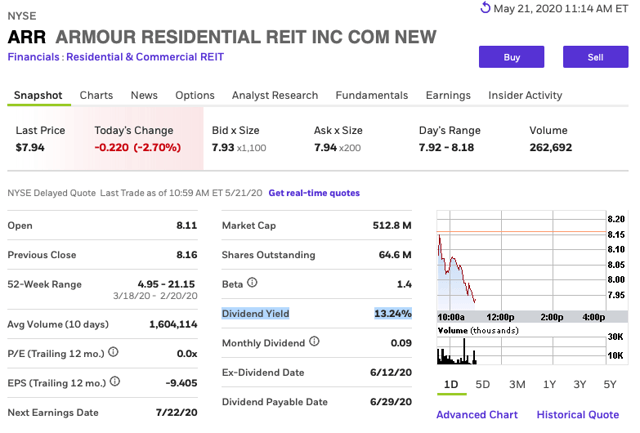 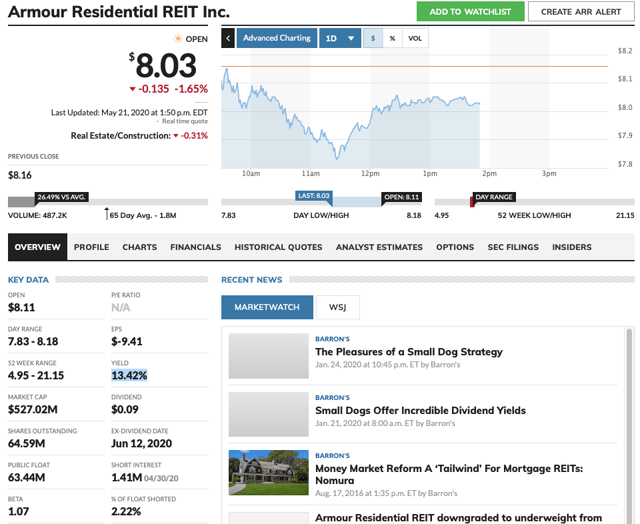 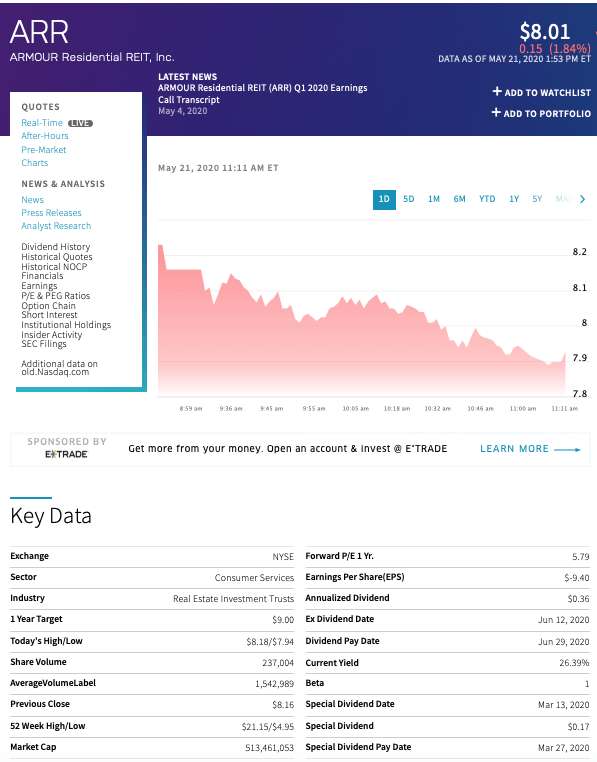 So, which is it? In the press release, the company specifically called the $0.09 distribution “quarterly.” Therefore, if the company keeps the distribution amount, but breaks it down to monthly payments, the new monthly distribution starting in July will be $0.03, corresponding to 4.5%.

The 4.5% rate would be more inline with company assets after the drastic selloff at the end of the first quarter. It is also consistent with where others in the industry are going, for example Two Harbors Investment Corp. (TWO) recently reduced the quarterly distribution from $0.40 per share to $0.05. Similarly, a reduction from $0.17 to $0.03 is not out of the question.

If ARMOUR Residential REIT’s assets dropped 75% in the first quarter, wiping out nearly half of all stockholder equity, believing the company can sustain a distribution of $0.09 per month is out of the question. The assets just won’t support it. However, $0.03 per month is probably doable in the short run, even if there are an additional 17MM new shares ready to come on the market.

Either way, it does not bode well for the share price in the short term. Shareholders that have lost so much already will probably lose confidence, even more, when the brokers and financial website get their distribution and yield numbers correct. Needless to say, my outlook is negative for the next quarter or more.

Additional disclosure: This information is not investment advice, nor is it a recommendation to either buy or sell any securities. Retail investors should do their own research and fully understand the risks associated with this company.

In the busiest week for the IPO market since February, four IPOs plan to raise $2.9 billion, including the largest US IPO of 2020. In what would be the largest IPO year to date, record […]

Xylem, Inc. (NYSE:XYL), a leading water technology company I have been covering since March, presented its first-quarter results on May 5. The figures were generally depressed, as revenue slipped while operating income and profit shrunk. […]