ARC Resources (OTCPK:AETUF) is a Canadian producer of natural gas. Despite the fact the company does report its production in barrels of oil equivalent, the vast majority (74% of the oil-equivalent output) of its production consists of natural gas while oil (12.4%), condensate (8%) and NGLs (5.9%). This means the company’s performance is very much tied to the gas price which hasn’t exactly been too fantastic in Canada, causing some unrest about the sustainability of the current generous dividend. The share price is now up over 30% since my previous article, so perhaps this is a good moment to check in again.

ARC Resources’ Canadian listing is obviously more liquid as it is a Canadian company. ARC’s shares are listed on the main board of the Toronto Stock Exchange with ARX as ticker symbol. Given the average daily volume of 2.5M shares is clearly superior to the volume on any secondary listing, it makes a lot more sense to trade in the shares of this C$2.6B market cap company through the facilities of the TSX.

In the third quarter of the year, ARC Resources produced an average of almost 135,000 barrels of oil equivalent per day, while it continued to focus on the expansion of its Dawson liquids facilities (which has now been completed) and the expansion of the gas processing division at Dawson (which should be completed by the end of the current semester).

The strong output resulted in a revenue of C$277M which includes a C$2.4M loss on derivative contracts, but also includes the revenue from selling third-party oil and gas to the tune of C$38.7M. Despite the decent revenue, the pre-tax result came in at a loss to the tune of C$71M as the total amount of operating expenses was almost C$350M. However, in excess of a third of the operating expenses consisted of (non-cash) depreciation charges while ARC also recorded a C$39M impairment charge on the value of certain financial assets. 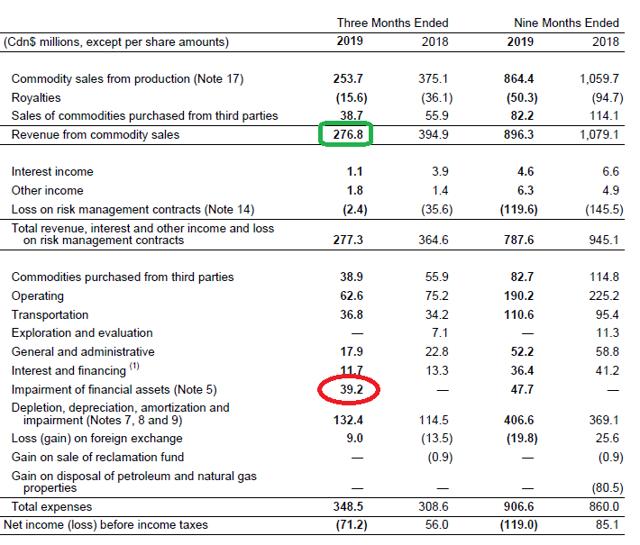 According to the footnotes that have been added to the financial statements, this impairment charge is related to the disposition of certain Redwater (Alberta) assets which were sold to a third party which subsequently defaulted and entered into a creditor protection procedure under the Bankruptcy and Insolvency Act in Canada, so ARC decided to record an impairment on the outstanding invoices and payments. That’s too bad, but this also is a non-cash expense. Important, as the cash flow result of ARC Resources is more important than the net income. Due to these impairment charges, the bottom line showed a net loss of C$57M for the quarter and approximately C$17M for the first nine months of the year, but this would obviously have been much better without the impairment charge.

ARC reported an operating cash flow of C$150M in the third quarter of the year, but this included a C$6M cash contribution from changes in its working capital position and excluded a C$2.5M payment related to the lease liabilities. On an adjusted basis, the operating cash flow was C$141.5M. A lot of money, but not sufficient to cover the C$160M in capex and the C$53M that has been spent on the cash dividends. 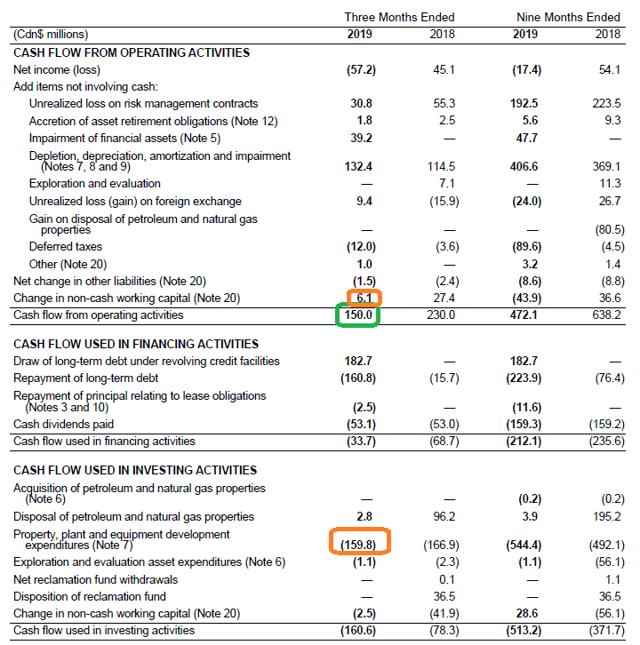 Is this alarming? Not really. As you saw in the first paragraph, ARC has been investing quite a bit of money in its infrastructure in order to be fully prepared for a higher oil and gas production further down the road. As you can see in the next image, the capex will start to decrease from next year on as the combination of sustaining capex + growth capex will come in at just C$500M while the average sustaining capex was just C$400M in the past few years.

ARC Resources is sticking with its 5 cent monthly dividend

ARC Resources continues to pay its monthly dividend which undoubtedly attracts a dividend-chasing crowd that’s looking to supplement its monthly income. The annualized dividend comes in at C$0.60, which results in a current dividend yield of approximately 8.2%.

The main question will be how ARC’s financial performance will develop throughout 2020. Based on the performance in the third quarter of the year, the dividend would not be fully covered and that would be problematic. Truth is, the gas price in Canada shows seasonal fluctuations, and the gas price is traditionally quite weak in the summer months. The average gas price received in the third quarter was just C$1.75 per Mcf compared to C$2.04 throughout the first nine months of the year (indicating the gas price averaged around C$2.15 in the first half of the year).

This means it would be a very bad idea to just extrapolate the cash flow performance of the third quarter, which traditionally is one of the weakest quarters. If we would for instance look at the cash flow generated in the first nine months of the year (which includes the weak Q3), the adjusted operating cash flow came in at C$504M. Not only would this be more than sufficient to cover the planned C$300M in sustaining capex (3 quarters at C$100M/quarter), but will also be sufficient to cover the dividend (which would cost the company C$165M) while leaving a few million dollars on the table for debt reduction.

So while the dividend clearly wasn’t covered in the third quarter of the year, it would be fundamentally wrong to draw conclusions based on just one quarter where ARC has been investing in its future growth while the gas price is traditionally weak as well.

As such, I still feel quite confident the current dividend is still fully covered and shareholders of ARC Resources can look forward to an 8.2% dividend yield. This doesn’t mean ARC shouldn’t perhaps focus a bit more on reducing its net debt (C$850M), but given the strong operating cash flows, we don’t see the net debt as a main deterrent for ARC Resources at this point.

Take advantage of the TWO WEEK FREE TRIAL PERIOD and kick the tires!

Disclosure: I am/we are long AETUF. I wrote this article myself, and it expresses my own opinions. I am not receiving compensation for it (other than from Seeking Alpha). I have no business relationship with any company whose stock is mentioned in this article.

Bank of Canada Main Talking Points: BoC held its target for overnight rate at the lower bound of 0.25%, bank rate at 0.5%, and deposit rate at 0.25% Reports economic slack has now been absorbed […]

delihayat/E+ via Getty Images Were you caught by surprise at the market selling off this hard to start the year? We will admit that we were caught slightly off guard by how soon the market […]