Apache (NYSE:APA) and Total (NYSE:TOT) announced a significant discovery in Suriname. This discovery continues the string of discoveries made by the Exxon Mobil (NYSE:XOM) and Hess (NYSE:HES) partnership in neighboring Guyana into the next country. Clearly, the market is hoping for a whole lot more good news as the stock clearly responded positively to the announcement of the discovery.

However, the distance in time between a discovery and the beginning of cash flow is considerable. Usually, about 7 years’ time is needed to fully evaluate the discovery and begin production. Often, the good news of one well is not enough to spend the money for infrastructure and facilities to support offshore production. Therefore, more good news will be needed. Still, the announcement is a positive start to what could be a significant reserve addition for Apache.

However, the realistic view would be that, at some point, the favorable geology will end. Exxon Mobil most likely drilled in the most favorable geologic locations as that partnership was there first. This new discovery could have equal or more hydrocarbons than the first, more publicized set of discoveries. But that is a little less likely. Still, there are 1.4 million acres left for the Apache partnership to explore. Therefore, there could be some decent results from this acreage that would result in substantial production additions.

But, right now, the partnership needs to evaluate the discovery for its potential and do some more drilling before investors can reasonably expect any cash flow in the future. Costs and profitability need to be assessed. A future drilling strategy needs to be planned.

In the meantime, investors clearly bid up the stock in hopes of a lot more announcements. This stock will become more volatile than usual due to the first successful announcement. Once things calm down a little and the market began to wait for more announcements, this stock retraced a good bit of the surge shown above on January 7, 2020.

Still, investors willing to bet on more good news may want to invest at the present time on the expectation of more successfully drilled wells. The risks of dry wells do decrease once a discovery is made. For a company the size of Apache, a discovery of this magnitude can have a very significant effect on production increases and profits. Therefore, no matter what the stock looks like now, it could turn out to be a bargain as more positive announcements are made. 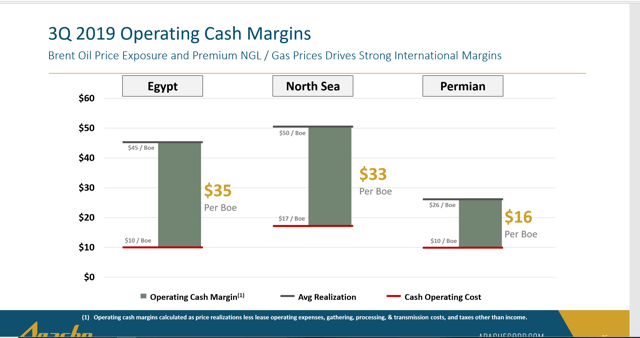 The accomplishments of Apache are clearly shown above. The offshore and Egyptian interests have the largest margins per barrel. Apache traditionally has not been a very strong unconventional operator. That is shown clearly by the margin in the first slide as well as the capital investment amount in the second slide. 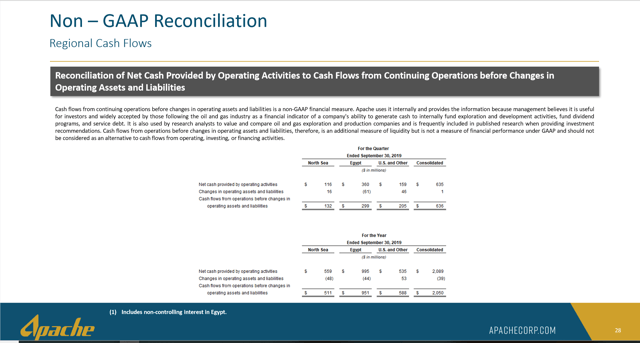 Apache has clearly been very successful in Egypt and the North Sea. The capital requirements to maintain those profits and cash flow have been minimal. Now, the partnership with Total could change that because a string of discoveries would need a lot of money to bring those giant offshore wells to production and sales. However, as shown above, just about anything but the unconventional business in the United States appears to be more profitable.

A logical assumption may be that Apache management would begin to sell the unconventional business as well as its interests in Altus Midstream (NASDAQ:ALTM) in pieces over time to fund a more profitable offshore success. That process would likely increase future company profitability as well as redeploy investments into an asset where the company has a history of greater success. The current price of Altus Midstream may well be reflecting that possibility.

Compared to the cash flow shown above, the net debt is running a little bit high in the barely acceptable range. The latest discovery announcement has the potential to change that for a very positive result. Still, there is some risk in that debt level, should the partnership begin to drill dry holes.

Apache has been generating a fair amount of cash flow due to a lack of growth. The discovery announced by the partnership with Total could change that. A few more discoveries and it will become apparent to the market that Apache would be entering a period of rapid production growth.

In the past, the company has done well both in Egypt and the North Sea. These appear to be the company strengths. Therefore, it is not very surprising that another major offshore success has been announced.

What is surprising is the capital level of investment in the onshore unconventional business, coupled with the relatively low margins and low cash flow. The unconventional model appears to be broken. If management cannot fix that model, then it would be best to sell that production and redeploy the cash raised into businesses where management has had more success.

In the meantime, this stock could become very volatile depending upon the announcement of successes in the partnership with Total. Material cash flow will not arrive within the five-year horizon. Therefore, investors who are willing to gamble upon more successful offshore discovery announcements may want to acquire shares of the stock during the “quiet” periods between announcements as well as after any potential disappointments. The stock is very unlikely to go “straight up”. Therefore, investors may be able to take advantage of pricing weakness as the exploration proceeds to dollar average the investment.

The chances for significant growth are now on the horizon. But that horizon for that growth is probably about 7 years away. Therefore, there is plenty of time to evaluate the company and decide at what point there is a future with enough definition to meet the investors’ risk profile.

I analyze oil and gas companies like Apache Corporation and related companies in my service, Oil & Gas Value Research, where I look for undervalued names in the oil and gas space. I break down everything you need to know about these companies – the balance sheet, competitive position, and development prospects. This article is an example of what I do. But, for Oil & Gas Value Research members, they get it first, and they get analysis on some companies that is not published on the free site. Interested? Sign up here for a free two-week trial.

Additional disclosure: Disclaimer: I am not a registered investment advisor and this article represents my personal views. It is not an investment recommendation and readers are advised to evaluate their own risk profiles and determine whether or not this investment fits their own risk profiles. The reader is also advised to read the government filings of the companies mentioned for further information (they include but are not limited to 10-K, 10-Q and as well as the press release filings). There is no substitute for doing your own due diligence, as due to the financial leverage of the company, these securities would be considered to be speculative.