Early this year, Anthem (ANTM) shares were hit hard by the prospect of a Bernie Sanders presidency. The stock rallied briefly in conjunction with a surge of support for Joe Biden, then fell again as COVID-19 dragged the market down.

Bears continue to fret over political headwinds and point to the COVID-19 crisis as a source of increased costs. There is also a possibility that surging unemployment will shrink membership in employer-based plans.

I made my first investment in Anthem about two weeks before the market began its downward spiral. A short time later, I sold Anthem for a profit along with a handful of other recent investments that were in the black. While I am largely a buy-and-hold investor, I judged I could put the cash to good use.

The shares trade for $42 less than when I sold out of my position, but the fundamentals of the business remain the same. I see an undervalued company with strong growth prospects, a sound financial foundation, and prospects for long-term, double-digit dividend growth.

An Overview Of Anthem

With 41 million members, Anthem ranks as the second-largest health plan provider in the US. The company’s scale gives it leverage when negotiating with provider networks. Its licensure relationship with Blue Cross Blue Shield provides a competitive advantage with large clients seeking a nationwide provider.

In fact, Anthem is the exclusive licensee for Blue Cross Blue Shield in 14 states. While the company does not have as wide a geographic footprint as United Health (UNH), its concentration in certain states (a 35% average membership in states where it holds a license) proves advantageous. The high concentration of members within certain states provides leverage when negotiating reimbursement rates. Health care providers grant these concessions with the expectation that greater patient volumes will offset the price reductions. In turn, Anthem can lower premiums, providing a competitive advantage against rivals.

The Beacon Health Acquisition Should Result In Significant Cost Reductions

Last month, Anthem completed the acquisition of Beacon Health Options, the largest independently held behavioral health provider in the US. Prior to the deal, Beacon served approximately 36 million individuals in all 50 states.

Beacon’s programs should produce significant savings by reducing emergency department (ED) visits by mental health patients. A program initiated by Beacon resulted in a 60% reduction in ER visits and a 34% reduction in inpatient admissions. Preventable ED use in the US totals 4.3 million visits and costs $8.3 billion annually. 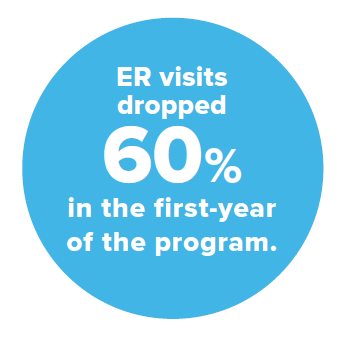 Anthem launched its in-house Pharmacy Benefits Management (PBM) company, IngenioRx, a half year ahead of schedule. While they fill an indispensable role in our country’s health care system, it is a fact that a PBM’s interests do not always dovetail with those of client companies.

Anthem announced that the transition was completed in January, and stated IngenioRx contributed a bit more than $1.00 a share to the company’s full-year results. Management also anticipates the PBM will add roughly $2.30 to 2020’s adjusted earnings per share, a better-than-10% increase over FY 2019 EPS. The company projects the PBM will provide $4 billion of gross pharmaceutical savings annually.

Bears fear the coronavirus will result in a significant drag on profits. During a recent press conference, Vice President Pence announced that coronavirus testing will be free nationwide. Of course, there will be additional costs associated with the virus. However, a month ago, Anthem affirmed 2020 guidance.

I provide an excerpt from a recent MSN article to illustrate why I view headwinds from COVID-19 as minimal.

Here is a collection of news reports I found, just by spending some time searching Google News:

I’m sure there are many more stories like these. But you get the idea.

Yes, I get the idea. Many elective procedures will be delayed. While that will result in a surge in costs at a later date, it may also result in fewer total procedures over the long run.

For example, let us assume I was scheduled for a routine colonoscopy in April, but I’m unable to undergo the procedure for six months. My once-every-five-years colonoscopy just got pushed down the road in years to come. (The horror!)

Where A Perceived Minus Is A Plus

There are those who criticize Anthem for not being as profitable as some larger rivals. For example, United Health has a better operating profit margin (8.13% versus 6.46%) and a better net profit after taxes (5.88 versus 4.61) than Anthem. However, this is in large part due to the membership mix held by the company.

The company’s Medicare Advantage membership increased by more than 20% in 2019, placing Anthem among the four largest providers.

The company won 80% of Medicaid procurements in 2019, and the government segment, driven by demographics, represents an $80 billion future opportunity.

Early this year, Anthem completed the acquisition of Medicaid health plans in Missouri and Nebraska that added 300,000 members to the company’s rolls. 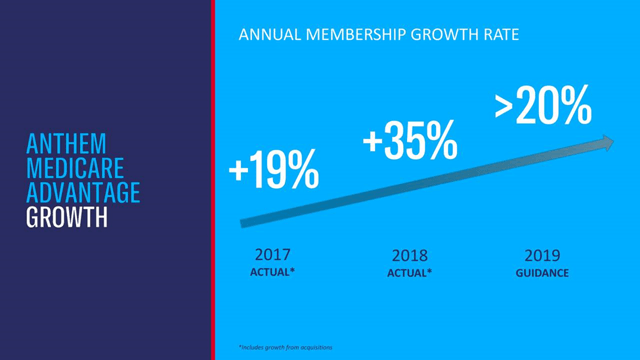 I view Anthem’s dividend as close to bulletproof. The company has a payout ratio of roughly 17% and a dividend coverage ratio that is nearing 600%. Not only is the dividend sustainable, but it’s reasonable to anticipate double-digit annual growth for the foreseeable future. The five-year growth rate stands at nearly 13%, and the yield is a bit below 1.6%.

The chart below testifies to the company’s robust share buyback program. 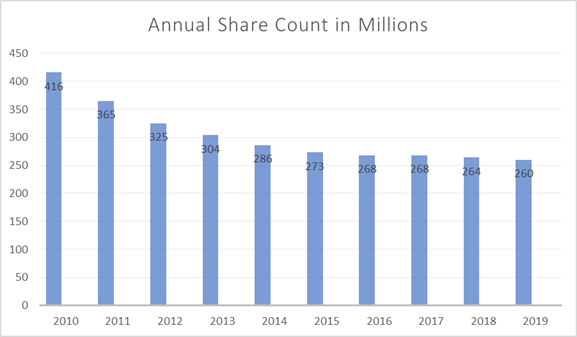 As I stated at the beginning of this piece, Anthem shares are trading $42 below the price I received when I exited my position in the company. Were it not for the swoon the market took due to COVID-19, I would still own the shares.

In this environment, I consider a strong balance sheet to be an essential element for a prospective investment. Anthem passes that test. Moody’s rates the company’s debt Baa2/stable and S&P rates it as A/stable.

I view Anthem as a company that is undervalued, with strong growth prospects and with a rock-solid dividend. Consequently, I rate the stock a Buy. However, I will add that I see a great deal of evidence that the market will take another swoon. My Buy recommendation is for investors who see evidence to the contrary.

I will speculate that as the coming earning season unfolds, we will witness a slew of companies providing dismal quarterly reports and greatly diminished guidance for FY 2020. Should Anthem provide strong results, investors will see the stock as a safe haven.

I hope to continue providing my articles without cost to SA readers. If you found this article of value, I would greatly appreciate your following me (above near the title) and/or pressing “Like this article” just below. This will aid me greatly in continuing to write for SA. Best of luck in your investing endeavors.

Disclosure: I am/we are long ANTM. I wrote this article myself, and it expresses my own opinions. I am not receiving compensation for it (other than from Seeking Alpha). I have no business relationship with any company whose stock is mentioned in this article.

© Reuters. FILE PHOTO: Small toy figurines are seen on representations of the Bitcoin virtual currency displayed in front of an image of China’s flag in this illustration picture, April 9, 2019. REUTERS/Dado Ruvic/Illustration/File Photo […]