Medalist’s stock price soared on Wednesday for a triple digit gain after the company was pumped in after hours trading Tuesday. The stock price change appears to have little to do with any fundamental change in the company or positive results, but traders seeking to pump the stock price higher and sell after making a quick gain.

The strategy enacted is known as a gap and run. After the stock price spiked in after hours, traders rushed into the stock in the early morning hours. The stock spiked from as much as $1.18 per share at close Tuesday to over $6 per share mid-day Wednesday. Since then, the stock price has come back down to $2.85 per share.

What Prompted the Spike?

Such is done rapidly in trading chat rooms, email lists, and social media activity. By distributing the news that the company is a buy to followers, traders bid the stock price up significantly. There are no major leases signed, acquisitions made, or apparent buy out rumors that indicate such an increase in the stock price is warranted. 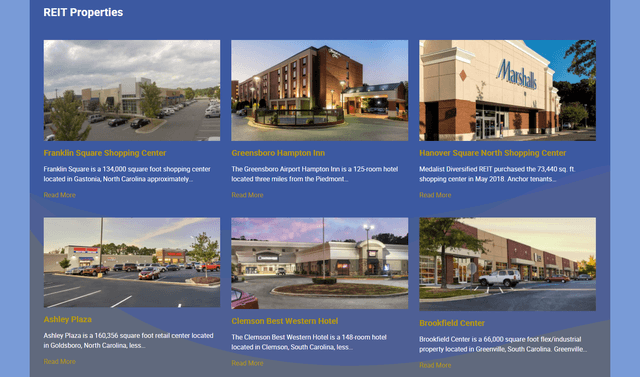 The company struggled immensely after going public, and covid has accelerated company challenges. Rent collection levels were down, and hotel occupancy plummeted due to reduced travel. MDRR’s September 15th business update stated that the company had collected 85% of its July and August rents, an improvement from prior months.

While hotel occupancy was way down from normal levels, the company had contracted with universities to provide housing for students at their hotels. Such provides a temporary boost to cash flow, though the company cannot predict how long the stay will be. In a recent interview, CEO Tim Messier mentioned that the company is positive on its retail property cash flow at current rental rates and expects hotels to break even.

Pre-covid, annualizing MDRR’s Q4 results would have resulted in net operating income of approximately $6 million. However, a massive decline in hotel revenues and low rental collections for the company’s retail properties resulted in Q2 NOI of just $795 thousand ($3.18 million annualized).

Given the bleak outlook for retail and hotel properties, a return to $6 million NOI is unlikely anytime soon. Additionally, the going-in cap rates for MDRR’s properties have been in the range of 7-9% at acquisition. Poor performance has likely resulted in higher cap rates that decreases the current value of the company’s assets.

To have a net asset value above zero, MDRR must generate a minimum NOI of $4.875 million, assuming an 8.2% cap rate on the portfolio. To achieve the company’s current valuation of $13.53 million, the company would have to attain around the $6 million in annual NOI. MDRR’s current NOI and outlook do not justify the valuation, demonstrating that the run up in its stock price today was unjustified and unreflective of the company’s true value.

In addition to trading at a premium to NAV, MDRR has consistently generated negative cash flow. Only Q4 2019 showed the company earning positive adjusted funds from operations (AFFO). The company operates inefficiently, resulting in high G&A and legal and accounting costs. Overhead costs consisted of nearly 20% of revenue in Q2 2020, and they have been over 20% for much of the company’s operating history.

The company is also very highly leveraged, as debt/gross assets is 74%. High leverage demonstrates why the recent decline in performance has negatively affected the stock price so much. Leverage enhances the impact of a modest decline in NOI or rise in cap rates on NAV.

MDRR’s financial performance and outlook make its common equity greatly unattractive at current prices. However, one potential investment in MDRR that has been attractive in the past is the preferred equity. The preferred stock increased modestly compared to the common stock and currently trades around $15 per share.

The preferred stock is much less liquid than the common stock and has traded in the range of $10-$13 per share over the past several months. Paying an annual dividend of $2 per share, the preferred shares yield over 13%. With a redemption value of $23 per share, more than 50% appreciation potential exists if the company can pay off preferred shareholders.

While the preferred dividend is not covered by cash flow, the company has continued to distribute dividends to preferred shareholders. I do not think the current price of over $15 per share represents a great risk-reward dynamic. However, recent news on the rise in rental collections and hotels contracted to universities boosts the company’s cash flow profile and its potential dividend coverage.

It remains uncertain how close the company is to being cash flow positive again. Given that annual distributions total $314,000, they do not represent a major expenditure that is essential for the company to cut right now. The preferred dividend could certainly be cut if performance does not improve in the coming quarters.

There exists a large disconnect between Medalist’s fair value and its current stock price. The large spike in its stock price Wednesday was a consequence of pump and dump stock traders and had nothing to do with changes in the long-term outlook of the company. Avoid the common, but watch for a potential correction in the preferred, which represent a much more attractive investment. In particular, I will be watching to see MDRR’s Q3 report and cash flow trends. An improvement towards profitability could instill greater confidence that the preferred dividend will continue to be covered, resulting in capital appreciation.

Disclosure: I am/we are long MDRR.PA. I wrote this article myself, and it expresses my own opinions. I am not receiving compensation for it (other than from Seeking Alpha). I have no business relationship with any company whose stock is mentioned in this article.

As we prepare for a third wave of coronavirus, investors should brace for another wave of market volatility. Back in February, I wrote a piece titled, “The VIX Is Catching A Bid From Coronavirus.” I […]